An Oyster Roast on Samish Bay 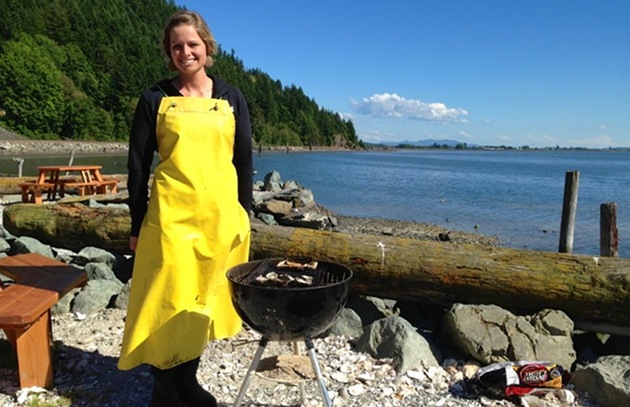 The drive on Chuckanut Drive from Edison, Washington, to Bellingham takes you along some of the most stunning coastline on the West Coast. To your right, cool spruce forests. To your left Samish Bay, with jaw-dropping views of the San Juan Islands, the smokestacks of Anacortes, and the snowcapped Olympic Mountains behind them.

It also takes you to Taylor Shellfish Farms—a fifth-generation oyster farm founded in 1890, where buttery kumamotos, briny shigokus, and sweet-fleshed Olympia oysters nestle on ice alongside locally grown mussels and Manila clams. Oh, they also raise geoducks, those huge phallic-looking clams so prized by sushi lovers around the Northwest. (Yes, you can grill them—there’s a recipe in BBQ USA.)

I arrived on a recent June afternoon—the sort of gorgeous sunny day Washingtonians spend eight rain-drenched months dreaming about. But my mission wasn’t sightseeing: it was barbecue Cascadia-style—grilled oysters.

Here’s how it works. You buy your oysters in prepackaged bags of 1, 2 or 5 dozen. (Figure on a couple dozen per person.) The locals recommend the large Pacific oysters (up to 6 inches long and 4 inches across) for grilling. Eat the small, succulent deep-shelled Japanese oysters with a squeeze of lemon on the half shell. While you’re at it, pick up a slender bladed Dexter oyster knife and a bag of charcoal. OK, the latter is Kingsford Just Light, not artisanal lump charcoal, but it certainly does the trick.

Head out to one of the picnic tables at the water’s edge, where a half dozen Weber kettle grills stand ready for your barbecue. Light the charcoal and grill the oysters just long enough for the top shell to pop open—a matter of minutes. Finish shucking with your Dexter and get ready to taste some of the freshest, briniest, most succulent oysters in your life.

You don’t really need a sauce, but local oyster woman and Taylor employee Megan Lomsdalen suggests a garlic lime beer butter. Dip the grilled oysters in the butter, or spoon it in the shells.

If the water were any closer, you’d need to dine in your bathing suit.