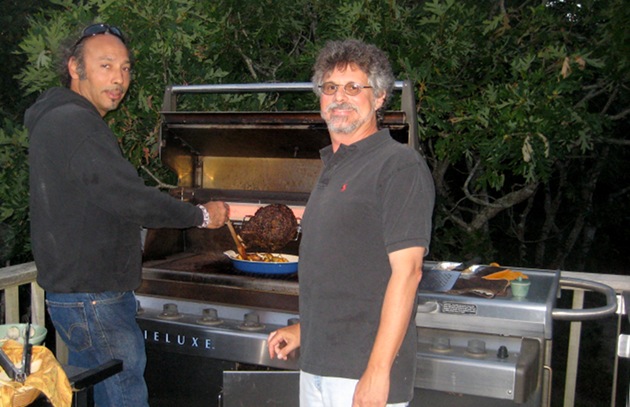 I’ve never met Bob Dylan. But I’ve sure seen him in concert a lot and I’m always playing his music. So when I met his bass player, Tony Garnier, on Martha’s Vineyard, one year, and discovered that he’s nearly as grill obsessed as I am, I immediately invited him over for a barbecue. The guy can play, and man, does he make a mean gumbo.

Over the years, I’ve met Frank Zappa (just off recording Absolutely Free) and Rod Stewart (way back when he was the singer for the Jeff Beck Group—remember them?). I never met Jim Morrison, but I did take my first ever date to a Doors concert. I never met Jimmy Hendrix, but I watched him torch a guitar at the Baltimore Civic Center.

So you can see music is very important to me—and when I grill, what’s on my Spotify playlist matters almost as much as what I have on the grill.

Here’s the Raichlen BBQ Playlist #1 (more to follow), anchored by old favs like Dylan, Springsteen, the Stones, and the Talking Heads, with exotic music from England, Nigeria, and beyond.

Please take special note of the fifth song on my list: Pale Blue Eyes by the Velvet Underground. The world lost a great musician this week, with the death of Lou Reed. May he rest in peace.

The Harder They Come by Jimmy Cliff

Blood on the Tracks by Bob Dylan

One Love by Bob Marley

Psycho Killer by the Talking Heads

Tougher Than the Rest by Bruce Springsteen

Maybe Your Baby by Stevie Wonder

Need something to grill to go along with your playlist? Start your search here: