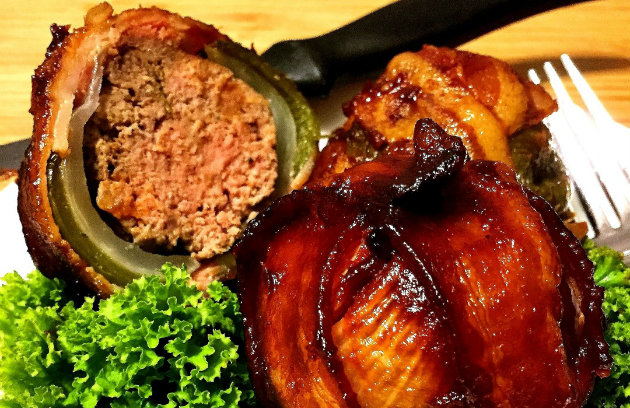 The onion bomb exploded on the internet a few weeks ago. It was love at first sight and first bite.

What? You haven’t heard of it? Imagine the outer layers of an onion, split, stuffed with a meatloaf-like mixture, wrapped in bacon, and smoke-roasted into an orb of meaty awesomeness. Whoever invented it merits a medal—they’re right up there with the man or woman who first dared to stand a chicken on a beer can. It appears to have its origins in the camping community where it was originally wrapped in foil and cooked directly in the embers of a campfire. (If you’re the inventor, please identify yourself on the Barbecue Board.)

Well, we’ve decided to drop a few onion bombs of our own based on grilled meatballs around Planet Barbecue. Explosively flavorful? You bet. Use the following recipes to fire up your creativity.

And post photos and recipes of your meaty ordnance.

Click here to get the recipes for Tuscan Onion Bombs (the master recipe) and five variations: The Mexican, Turkish Onion Bombs, Onion Bombs in a Boat, The Greek, and T-Bombs.