How to Slice Brisket 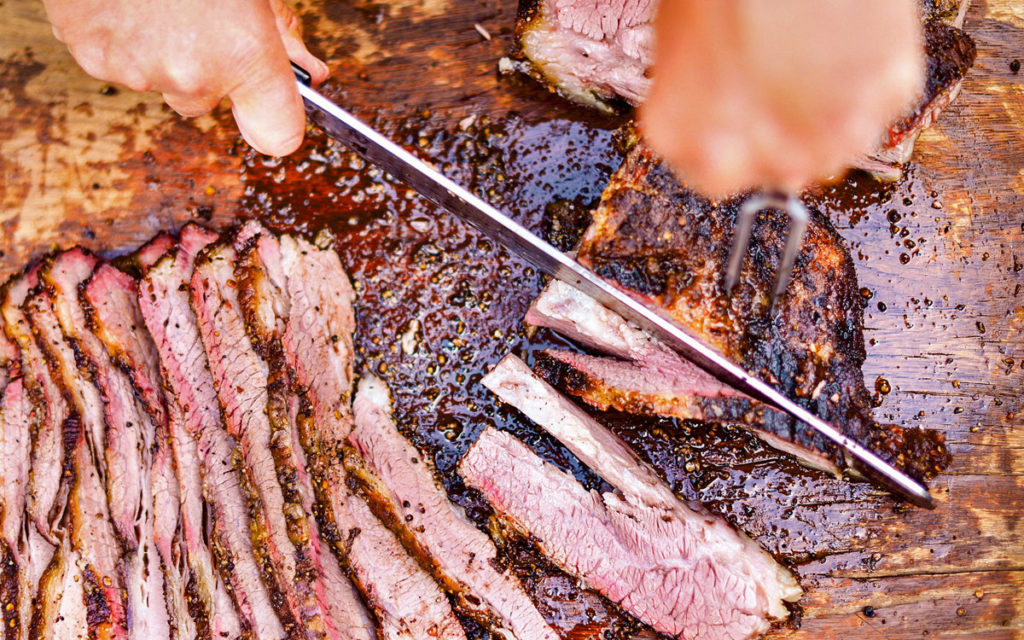 (Excerpted from Steven’s latest book, The Brisket Chronicles. Get your copy today! )

In a process as idiosyncratic as cooking a brisket, there are lots of theories on the best way to carve it. Over the years, I’ve come to adopt the Aaron Franklin method (Aaron Franklin of Franklin Barbecue in Austin, Texas) in which you cut the brisket in half widthwise (roughly where the bulge of the point starts), then slice the flat section on the diagonal across the grain, and the point section perpendicular to the edge—again, so you wind up slicing the meat across the grain. See the photos below.

An alternative method was proposed by Ohio pit master and restaurateur Jim Budros: separating the point and the flat (removing the fat between them) and realigning them, giving the point a 60-degree turn, so the meat fibers all run the same way. That way, you can slice the meat from top to bottom across the grain.

So what’s the best way to serve barbecued brisket? To my mind, as simply as possible. Texas tradition calls for slices of factory white bread. In Brooklyn, you might get brisket with brioche rolls. In Tex-Mex circles, you serve it on tortillas or with torta rolls. In Los Angeles, you might eat it banh mi-style, with Vietnamese condiments on a crusty baguette.

Sauce? If you’ve smoked your brisket correctly, you won’t need it. (For more than half a century, the historic Kreuz Market in Lockhart, Texas, didn’t even serve it.) If you insist on sauce, serve it on the side; first taste the brisket without it. That way, you can enjoy the smoky awesomeness of the meat before you add what for some people (me among them) are the dissonant notes of sugar, molasses, or tomatoes. Remember, the accompaniments should support—not camouflage—the meat.

How to Slice Brisket: A Step-by-Step Guide

A pitch-perfect barbecued brisket after it’s gotten its beauty rest: 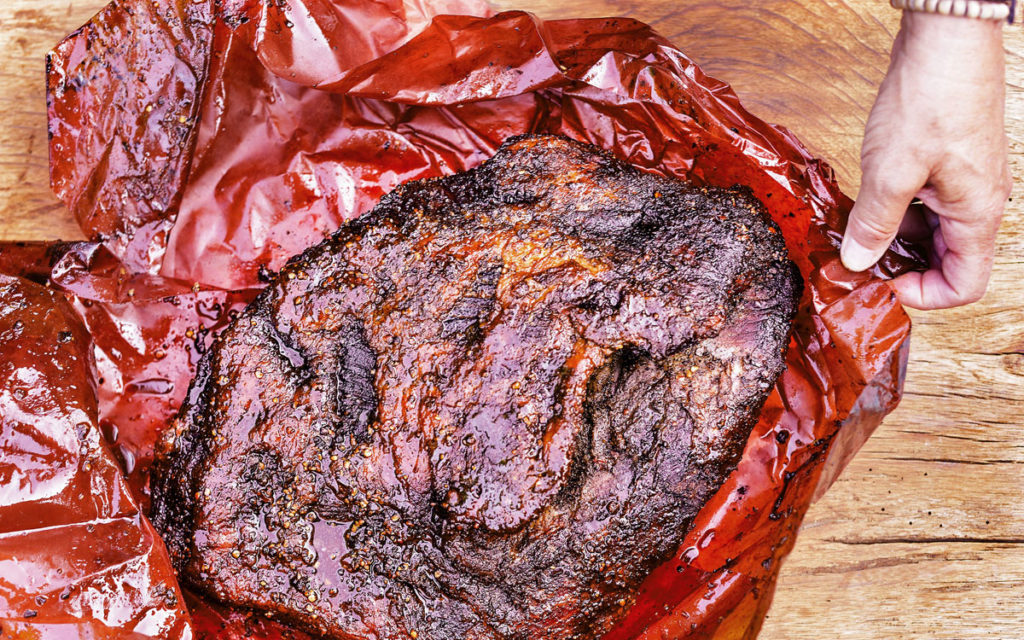 1. Cut the brisket crosswise into 2 sections.

After the barbecued brisket has gotten its beauty rest, cut the brisket crosswise into 2 sections: the flat and the point. A brisket knife is a wonderful tool to have. 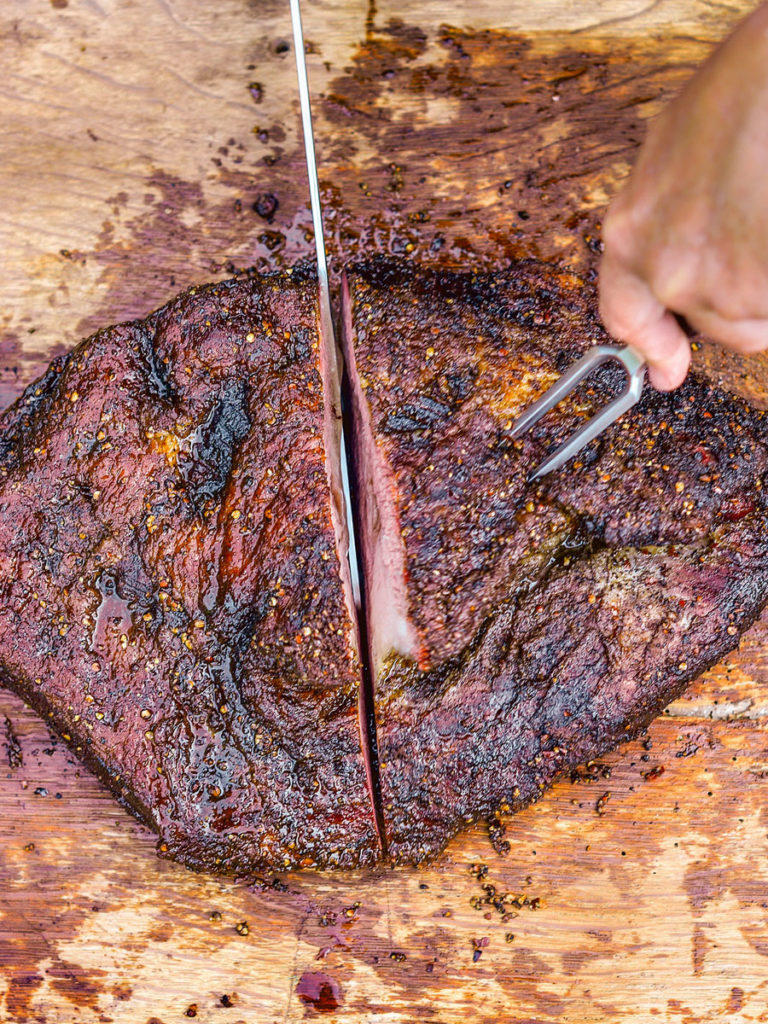 2. Trim any excess fat off the top of the brisket. 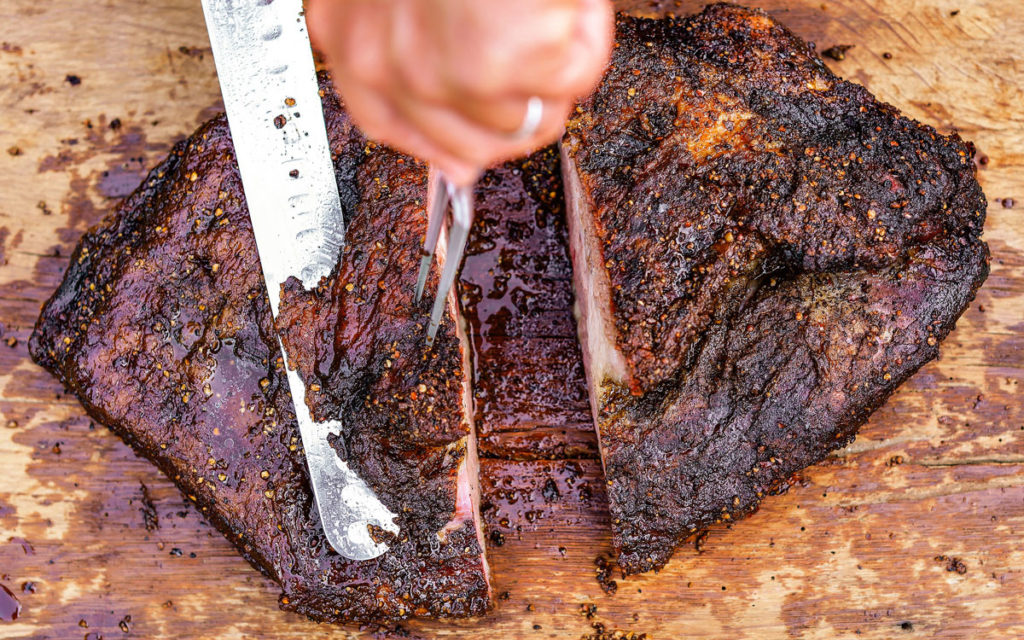 Cut off the hard, dry tip (often somewhat overcooked) and dice it to serve as burnt ends. 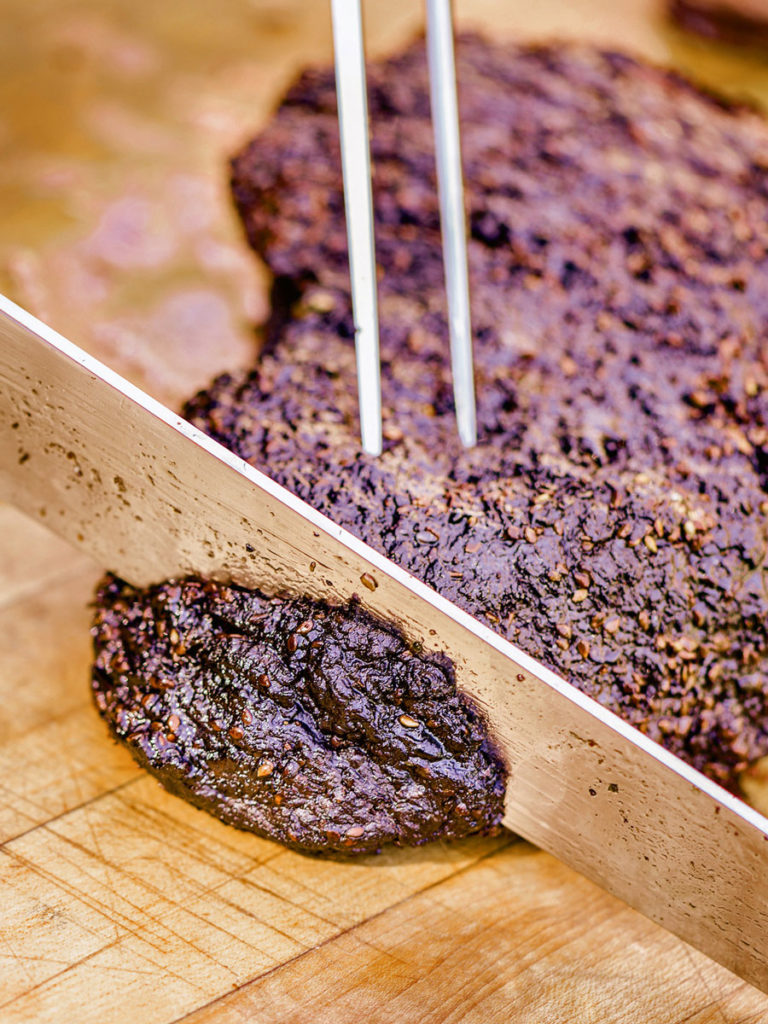 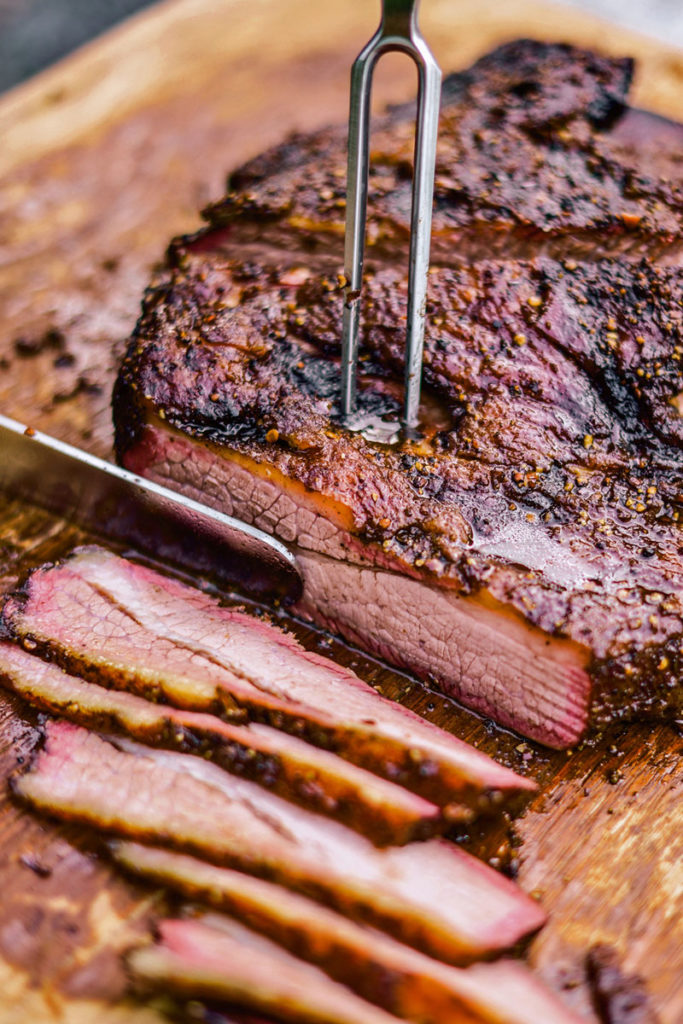 5. Cut the brisket point section in half widthwise. 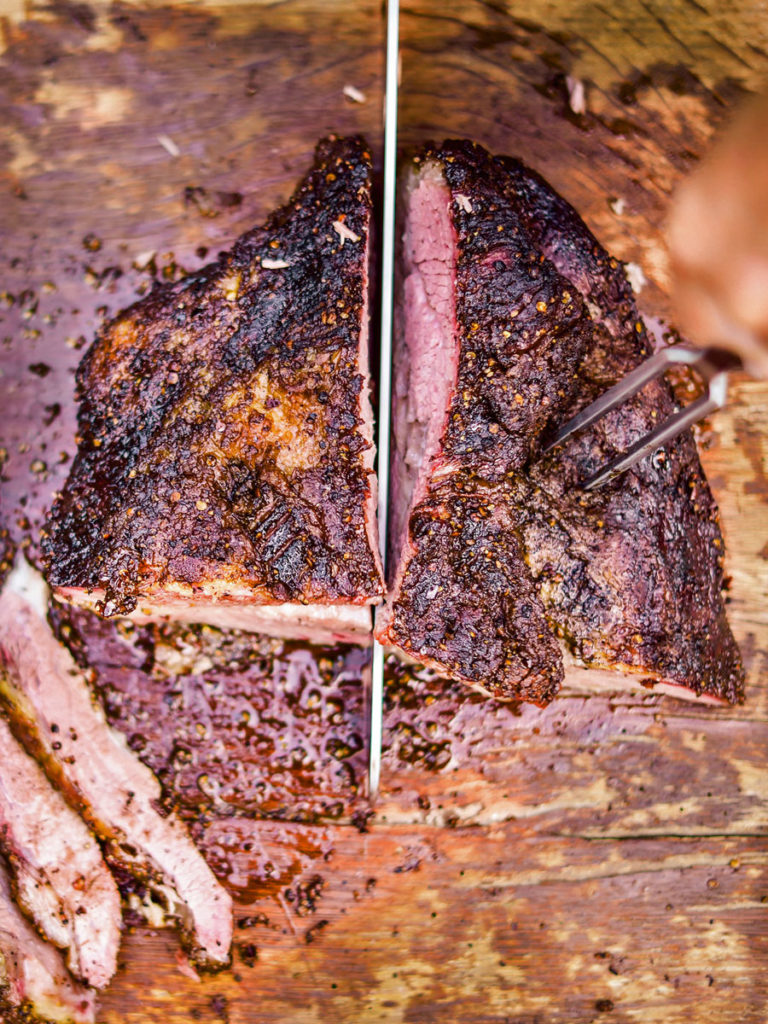 6. Slice the brisket point pieces against the grain.

7. A proper slice of Texas-style barbecued brisket will be about the thickness of a No. 2 pencil. 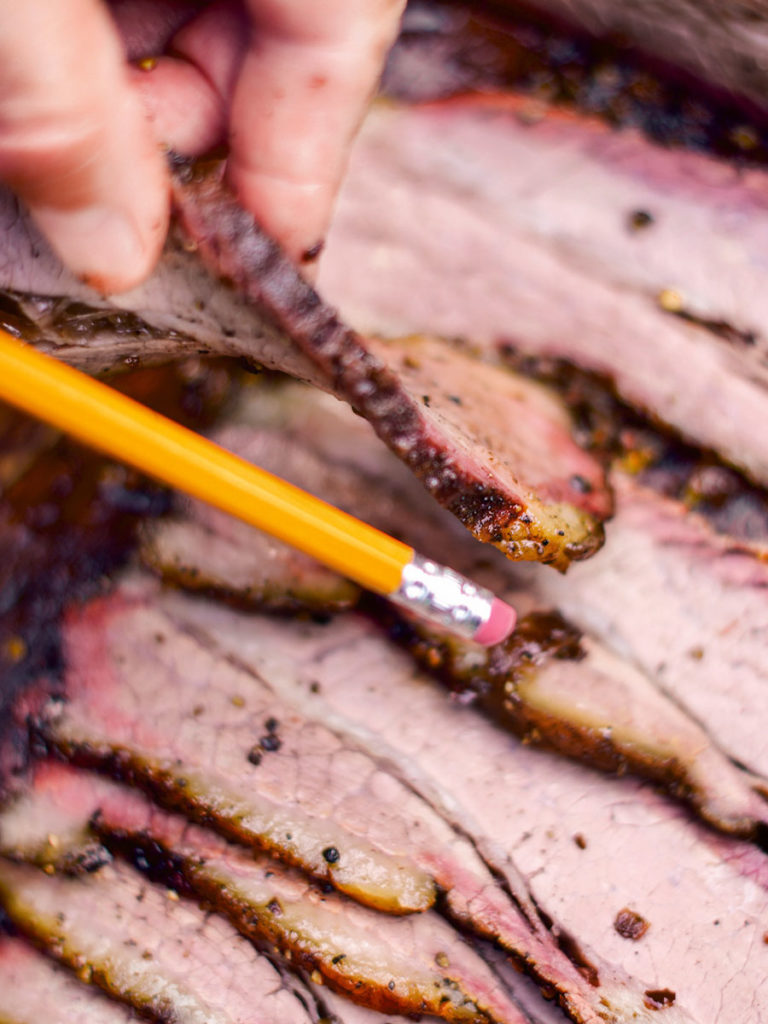