Beer Can Turkey for Thanksgiving 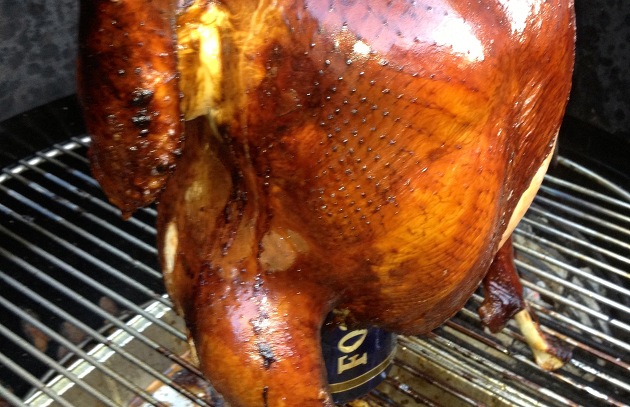 You wouldn’t, would you—not with America’s most revered culinary emblem—Thanksgiving turkey? In this age of culinary iconoclasm, shouldn’t a few classics remain sacred? So don’t let a man with a can even get near a fowl so profoundly American, Benjamin Franklin wanted to make it our national bird.

Well, recent times have broadened our definition of icons—and turkey. The latter has been ground into burgers, stuffed into hot dog and sausage casings, and sizzled in deep-fat fryers. Has the gleaming mahogany-hued oven-roasted bird depicted in Norman Rockwell’s 1943 painting “Freedom from Want”—a nostalgic Thanksgiving symbol for generations of Americans—become an endangered species?

Well, sorry, Mr. Rockwell, but here comes the strangest incarnation of all: beer can turkey.

You’re surely familiar with beer can chicken, a whole bird smoke-roasted vertically over an open can of beer.

Roasting poultry in this singular posture has at least three advantages.

First, the vertical position enables the bird to roast with convection-like efficiency on all sides, resulting in great color and crisp skin (even on the the back, which can remain wan and soggy when conventionally cooked in a roasting pan in a prone position).

Next, the steaming beer rising from the open can seems to humidify the bird from the inside out, keeping the meat moist and succulent—even if you overcook it. Some people believe that the beer imparts a subtle flavor all its own—a flavor real or imagined that seems to become more pronounced the more beer you drink.

Finally, there’s the spectacle of a turkey roasting upright on a beer can on your grill. Call it a fusion of form and function or call it pure shock value, but the process definitely turns heads.

You’ll need four things to beer can a turkey:

If you want to make the whole process easier to set up, try my beer can chicken roaster. It will stop your bird from tipping and the beer from spilling.

Want to go really out-of-the-box for this traditional holiday? Get Miami flavor this Thanksgiving with a adobo-marinated, spit-roasted turkey, served with citrus garlic sauce on the side.