The Year of the Brisket 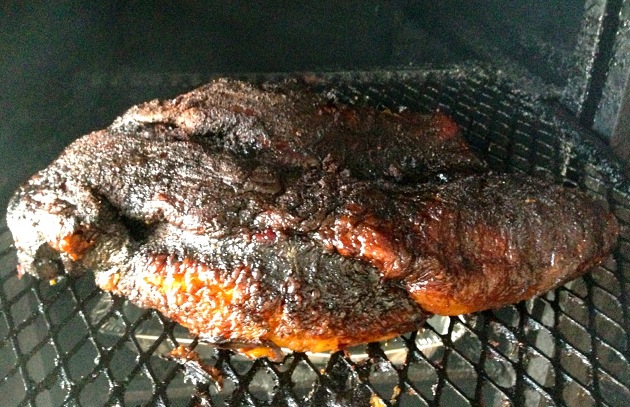 When I started in this business, barbecue mythology held that it took decades to master how to smoke a brisket properly, transforming this tough ornery muscle from the chest of the steer into meat so juicy it oozes when you press it and so tender you can cut it with the side of a fork.

Today, some of America’s foremost brisket masters are still in their twenties (so much for decades of experience), and no, they did not grow up as scions of generations-old barbecue dynasties. Billy Durney of Hometown Bar-B-Que in Red Hook, Brooklyn, for example, ran a bodyguard agency before he became a pit master. Austin’s legendary Aaron Franklin supported himself as a “nail banger” while he waited for his barbecue business to take off.

Equally deep-rooted in the mythology of barbecued brisket are notions of complex spice rubs, proprietary slathers and glazes, and barbecue sauces so top secret, if the pit master revealed the formula, he’d have to kill you.

For the new generation of brisket masters, the simpler the seasonings, the better. (Many use only salt and pepper.) And rather than rely on mop sauces (swabbed on during the cooking) and finishing sauces (lacquered on at the end), they achieve succulence through the thermodynamics of their pits and strategic wrapping and resting the meat. As for barbecue sauce, Dan Delaney of Brooklyn’s BrisketTown (and the new SmokeLine on Manhattan’s Highline) discourages it.

So what can this new generation of pit masters teach us about smoking the perfect brisket?

Below are 17 secrets for the ultimate 21st century brisket.

The quality of the meat matters and so does the source: When I interviewed Texas pit masters during the writing of BBQ USA, they discoursed at great length about the pit, wood, and seasonings. No one discussed the actual meat. Today’s brisket masters insist on natural or even organic beef—ideally from farms in the region. The new brisket bragging rights include terms like “hormone-free” or “grass-fed.” Says Scott Youkilis, owner of Hi Lo Wood-Fired Cooking and Cocktail Bar in San Francisco: “Here in California, we like to work with whole animals from farms we know.”

Start with a whole packer brisket: The lean flat rectangle of brisket you buy at your local supermarket is actually just part of a large tough pair of muscles cut from the steer’s chest and known in their entirety as a “packer brisket.” The packer also includes the “deckle” (a fibrous super-generously marbled—read “fatty”—muscle that sits atop the flat) and a triangular “point” at the end. A full packer tips the scale at 14 to 18 pounds, and at least 40 percent of it is fat.

Burn wood only and burn local wood: Today’s pit masters burn only one fuel in their smokers: wood. “I like hickory as much as the next guy,” says former Ohioan and now San Francisco-based Scott Youkilis, “but we burn strictly local California oak.”

Go easy on the smoke: Ultimately, your brisket should taste like meat, not like smoke. “I like to say our meat is ‘kissed’ by smoke, not overwhelmed by it,” Hugh Magnum says. Cook on cardboard: The bottom of a packer brisket is lean meat from the flat and it sometimes becomes burned or tough during the 15 hours it takes to smoke a brisket. Hometown’s Billy Durney has an ingenious solution: he cooks the briskets on rectangles of cardboard (perforated with a knife beforehand to allow the smoke to reach the meat). “This keeps the bottoms from drying it, and it also facilitates moving the briskets from smoker to warming box. (Note: you’ll find a similar technique in my foil pan roasted brisket in How to Grill.)

Keep the air flowing: For even heat circulation, leave at least 3 inches between each brisket. This is especially important when working in a home smoker. “Keep plenty of air flowing through the pit at all times,” says Aaron Franklin. “The secret is a good clean fire.”

Keep it moist: For Mighty Quinn’s Hugh Magnum, a succulent brisket demands a moist pit. He keeps 10 gallons of meat drippings in the drip pan during the entire length of the cooking process. He won’t even open the pit during the first 12 hours of cooking for fearing of losing moisture and drying out the meat.

Slow it down: Here’s one point on which the young Turks and old masters agree: Cook your brisket low and slow. It takes a low temperature (215 to 225 degrees) and long cooking time (15 to 20 hours) to melt the collagen, fat, and other tough connective tissue in the brisket.

Heat it up: As an exception to the rule above, Aaron Franklin and his disciple, John Lewis of La Barbecue Cuisine Texicana (also in Austin) cook their briskets at 285 to 325 degrees, which just goes to show there are at least two ways to skin the proverbial cat.

Don’t cook to temperature: Conventional wisdom holds that the best way to cook a brisket to the proper doneness is to use an instant-read meat thermometer to achieve an internal temperature of 190 to 195 degrees. The new brisket masters work much more by look and touch. “A properly cooked brisket will jiggle when you shake it,” says Hometown’s Billy Durney. Think Jell-O comprised of animal protein and beef fat.

End with a wrap session: The last couple hours of cooking, Aaron Franklin wraps his briskets in butcher paper. “The paper is porous enough to let the meat ‘breathe’ (unlike aluminum foil, which gives you that ‘pot-roasty’ consistency),” Franklin says. Once it becomes soaked through with brisket fat, it seals in the juices. A side benefit: it also makes it easier to move the briskets around—from pit to warming box to cutting board. At Mighty Quinn’s, the moment the briskets come off the pit, Magnum and crew swaddle them in plastic wrap. And at both establishments, the brisket is rewrapped after each slicing to keep the meat moist.

Give it a rest: Hometown’s Billy Durney smokes his brisket for 18 hours, but the meat isn’t ready to serve until it rests in an Alto-Shaam (a professional warming oven) for 4 hours. “This allows the juices to be reabsorbed into the meat,” Durney says. Don’t have an Alto-Shaam? An insulated cooler works great—and once you’re done resting the brisket, you can use it to chill the beer.

Slice it right: Because of its unique anatomical structure, with the grain of the deckle running at roughly a 60 degree angle to the grain of flat (and separated by a layer of fat), brisket requires a special slicing technique. Here’s how they do it at Mighty Quinn’s:

It’s not about the sauce: In some parts of the U.S., barbecue is synonymous with the sauce. Not in Texas or Brooklyn. Dan Delaney of BrisketTown in Brooklyn doesn’t encourage barbecue sauce, but provides squeeze bottles for hard-core sauce fans. Aaron Franklin also puts sauce on the tables for customers to dose their own..

Don’t limit yourself to white bread: At traditional Southern and Texas barbecue joints there’s an almost reverse snobbery about serving the most plebian bread you can find—usually a half loaf of some local version of Wonderbread dispensed right from its plastic bag. Dan Delaney of BrisketTown serves brisket on potato rolls from a Pennsylvania company called Martin’s Famous Pastry Shoppe.

Think out of the box: Scott Youkilis of Hi Lo in San Francisco serves his brisket on an emerald-green pool of spinach oil with micro-greens arranged with tweezers on top. At a recent dinner at the Granary in San Antonio, the smoked brisket arrived in an umami-rich bowl of ramen soup with smoked soy broth.

What are your secrets for attaining brisket nirvana? Please share details, photos, and recipes on the Barbecue Board.