Chili Goes Up in Smoke 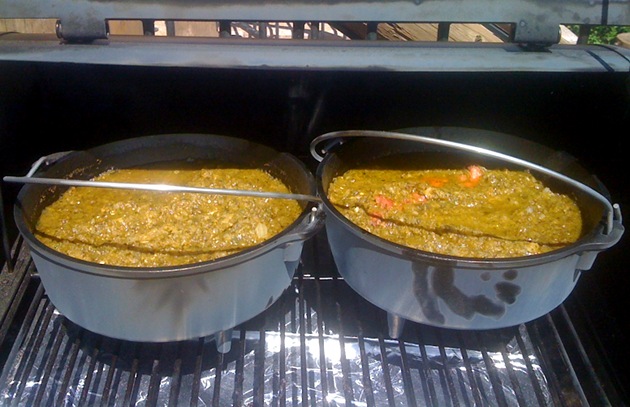 Chili concocted outside of Texas is usually a weak, apologetic imitation of the real thing.

—Lyndon B. Johnson, 36th President of the United States

If you have invited a Texan to your table, do not—I repeat, do not—serve chili. You might have the best of intentions. But trust me: Nothing good will come of it. Texans have very strong, deeply embedded opinions about their “bowl of red.” There are arguments about what should go into it (cubes of beef, chili powder or dried chiles, and approved flavorings from a short list), what should stay out of it (beans or fillers of any kind), and what should be served with it (a spoon). Attempts to diffuse the situation by steering the conversation to safer ground—say, religion or politics—will fail. Well I have a way to make a Yankee’s chili acceptable—even lust-worthy for a Texan. Smoke it on the grill.

Texas has reason to be proprietary about chili. Contrary to popular belief, chili con carne didn’t come from Mexico. Historians say the first chili seen in the United States was made around 1731 by immigrants from Spain’s Canary Islands, who settled in San Fernando de Béxar (now San Antonio, Texas). By the 1850s, cowboys and gold miners were pounding dried meat, chiles, fat, and spices together into brick-like shapes to be rehydrated on the trail—a kind of Southwestern pemmican. Later, enterprising Latino women sold plates of homemade chili and tortillas to Spanish soldiers at San Antonio’s Military Plaza from colorful carts, keeping the food hot over mesquite fires. San Antonio still honors its “Chili Queens,” as they were affectionately called, with an annual festival held Memorial Day weekend. (For the record, the city put the Queens out of business in 1937 for health department violations.)

As for the extreme partisanship that surrounds chili, I say we should all just calm down. All chili is good. From ground meat and tomato-based chili to the top secret pots of red concocted by cook-off competitors.

Great as chili is cooked on the stove, there’s a way to make it even better. You guessed it: smoke-simmered on the grill. Here are some of my tips to help you up your chili game, as well as my recipe for chili Barbecue! Bible-style, featuring three meats, a secret ingredient, and of course, wood smoke.

Try these other chili recipes, including one regional favorite, Cincinnati Chili:

Do you have your own winning chili recipe? Share the details and your favorite photos with us on the Barbecue Board.