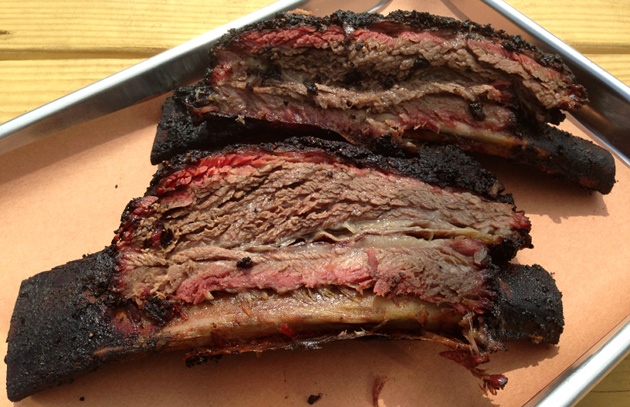 Have you ever experienced the “brontosaurus” rib at Mighty Quinn’s in Manhattan? How about the 8-inch long beef plate ribs at La Barbecue Cuisine Texicana in Austin? Or the pastrami beef ribs elucidated in the amazing five-volume Modernist Cuisine cookbook by Nathan Myhrvold. I hope so—you should.

After decades of playing backup to the omnipresent, uber-popular pork baby back and sparerib, the beef rib has finally achieved star status of its own.

It’s about time. In the hands of a skilled pit master or mistress, beef ribs have no equal. (Triangulate brisket, tri-tip, and flank steak and you get an idea of the flavor.) Pork ribs, which famously outsell beef ribs, pale in comparison.

But which beef rib? You could start with beef back ribs. Unfortunately, you rarely see good ones at your butcher counter or in your supermarket’s meat department. You’re more likely to find what competition barbecuers derisively call “shiners”—back ribs with so much of the meat removed that there’s hardly anything left but shiny white bones with a few nuggets of protein connecting them. There’s an economic explanation for this: Butchers can sell prime rib roasts and steaks at much higher prices than back ribs, so have little incentive to leave expensive meat on the bones.

And speaking of monsters, there’s the The Big Beef Rib developed by Texas entrepreneur Dominic Palmieri. Imagine a 2-pound hunk o’ chuck steak impaled on a 17-inch rib bone which Palmieri launched at the Houston Rodeo in 2012. You can buy the ribs from his website and smoke them at home. That would get the neighbors talking. Use this handy chart to visualize where you can find all the best cuts of beef ribs. The percentage represents how much of the steer is used for each cut.

For all their growing popularity, considerable confusion surrounds what beef ribs are. And aren’t. Even butchers squirm when pressed for precise information, as beef ribs can actually come from three separate locations on the steer.

Though the aforementioned ribs have different characteristics, all make excellent candidates for the grill or smoker.

Back ribs respond well to indirect grilling, but will shrink considerably during the cook—much more than pork ribs. I advise buying a whole bone-in prime rib roast, then asking the butcher to trim off the rack of bones, leaving more meat attached than usual. You’ll have two great grilling experiences for the price of one. When the meat is this good and the pit is hot and smoky, you can get by with seasoning the ribs like they do in Texas—with salt and pepper and nothing more. Especially no sauce. Try my Salt and Pepper Beef Ribs recipe.

Plate short ribs are similar to brisket in that their meat is striated with flavorful fat and collagen. As a consequence, they need to be cooked to a temperature of at least 190 degrees for maximum succulence. Low and slow is the way to go. These ribs are particularly well suited to the pastrami treatment.

Chuck short ribs are generously marbled throughout, meaning they can be barbecued low and slow, indirect grilled, or even direct grilled. (The fat melts as they cook, keeping them tender and juicy.) Thanks to the growing popularity of Korean barbecue (kalbi), Korean-style crosscut short ribs have become more widely available, as has flanken and its Argentinean equivalent tira de asado. I like to marinate them first, then direct grill them over high heat until done. Snip into individual bones with kitchen scissors, as they do in Korea, then serve with grilled scallions and garlic, kimchi and other Korean condiments, plus lettuce leaves for wrapping.

You can also cook short ribs using a hybrid method: smoke the ribs for an hour, then foil them tightly with beef broth or beer and aromatics like shallots and herbs, and continue cooking them at low heat (about 250 to 300 degrees) until nearly fall-off-the bone tender, 1-1/2 to 2 hours longer. This method is called smoke-braising, and it’s a great technique to use for proteins that tend to be tough.

Tell us about YOUR experiences with beef ribs on the Barbecue Board.

Try all these beef ribs recipes and pick up some tools to help you perfect your technique: