The Science of the Smoke Ring 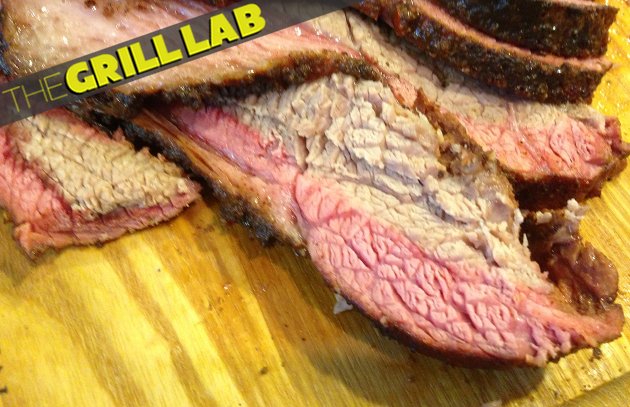 The smoke ring is the red badge of honor of great barbecue. Many of you smoke fiends have seen it up close—that prized layer of pink under the bark (crust) in slow-smoked meats. But what is it really and what causes it? The explanation lies within the meat itself.

First, a simple meat chemistry lesson. Myoglobin is the protein that gives meat its red color. Beef has about four times as much myoglobin as pork, giving it a much redder color. And chicken thighs have more myoglobin than the breasts—hence the term “dark meat.”

In its native state, myoglobin is purplish-red, the color you can see right after the butcher cuts your beef. But myoglobin loves to bind with oxygen. Soon after the meat is exposed to air, the myoglobin changes into oxymyoglobin, a bright red pigment that many of us associate with fresh meat. Leave that meat out for a little longer and you get metmyoglobin, which has an unappetizing brown color you might see in meat cut a few days ago.

So what does all this talk of myoglobin have to do with the smoke ring—and killer barbecue?

When you burn wood, it creates a gas known as nitrogen dioxide. The gas dissolves on the wet surface of the meat, binding with the myoglobin, and preventing it from becoming that dreaded brown metmyoglobin. The smoke locks in that prized pink color.

The pink smoke ring occurs only on the outside edge of the meat because the nitrogen gas absorbs from the outside in. Typical smoke rings will be 1/8 to 1/2 inch deep. Want to achieve that 1/2 inch ring? The key is moisture. The dissolved gas can’t go very far into the meat if the surface is bone dry.

Mopping your prized brisket or ribs creates a sticky surface that acts as a vehicle for the nitrogen dioxide to move deeper into the meat and helps grab more gas from the smoke. So if you’ve ever wondered why some pit masters are so insistent on mop sauces, it’s not just for extra flavor or moistness. It actually leads to a deeper smoke ring. According to Tom Mylan, of The Meat Hook, failure to form the sticky outer layer on the meat will result in a “sooty, gray-brown color” (meaning no smoke ring).

If natural smoke isn’t giving you the ideal ring, there is a way you can cheat. A dusting of pink salt or any curing salt with sodium nitrite (one common brand is TenderQuick) in it will produce the pink color you’re looking for. (You’ve probably seen this effect in cured meats, like ham or hot dogs.) But don’t count on it helping you win competitions. Aware of the fact that not all smoke rings are achieved by wood smoke alone, the Kansas City Barbecue Society has ceased making a smoke ring one of the criterion for professional judges.

Do you have a smoke ring tale to tell or a gorgeous photo to show off? Let us know on the Barbecue Board and post photos of your best smoke rings.