Go for the Burn: Authentic Jamaican Jerk at Home 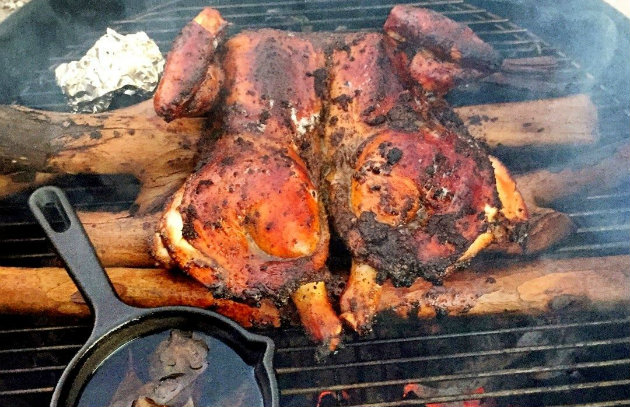 As anyone who has eaten real-deal Jamaican jerk can tell you, it hurts. Smoke gets in your eyes and Scotch bonnet chiles scorch your gullet. Gary Feblowitz explains. “You need to sweat while you’re eating jerk,” says my new friend (we met on the set of Project Smoke) and go-to guy for indispensable jerk supplies.

An Emmy award-winning videographer (you’ve seen his work on the Discovery Channel and PBS), Feblowitz is one of jerk’s most zealous evangelists. The license plate on his SUV reads “JRKMSTR.” (I’m guessing that would play well in Kingston, but might be misinterpreted in Gary’s home state of Minnesota.)

Gary’s jerk epiphany occurred when a vacation to Jamaica was extended two weeks by a medical emergency that prohibited air travel. He knew the key to authentic jerk was the pimento (allspice) tree—its fruit (allspice berries), leaves, and especially, its fragrant wood. He wanted to import these ingredients into the U.S., but the Jamaican government had banned pimento exports in the early 1900s after demand for the dense, beautiful wood nearly wiped out the supply. (At the time, it was popular for umbrella handles.) Gary proposed to use only trim or felled trees and plant three for every one he imported. The Jamaican officials agreed. Gary Feblowitz (left), owner of Exotic Wood Chips, LLC, with Steven Raichlen on the set of Project Smoke. In addition to being a jerkmaster, Gary is an Emmy award-winning videographer. Photo by Rob Baas.

Like North American barbecue, Jamaican jerk is simultaneously a dish, a cooking method, and a way of life—a noun and a verb.

Historically, jerk is associated with the Maroons, runaway slaves who settled in the mountains when the British defeated their Spanish owners in 1655. The Maroons hunted wild boar, which they rubbed with a fiery paste of salt, spices, onions, ginger, and chiles, and cooked it slowly over smoldering pimento or laurel wood fires in earthen pits. The method tenderized and preserved the meat, and more importantly, produced little smoke, which would have given away their positions. (Cuba’s lechon asado and Hawaii’s kālua pig are similar.)

Today, Jamaica’s “jerkmen” are more likely to cook in modified steel drums or shallow trough-like grills covered with sheets of corrugated tin. Once you master the basics, you can jerk almost any protein on your gas or charcoal grill or smoker. Chicken and pork are the most popular meats, but I’ve also encountered jerk snapper, lobster, shrimp, and even tofu. Gary confided one of his favorite preparations is jerk brisket. We can’t wait to try that!

Most jerk ingredients are available at any supermarket. You can order the rest through Gary’s website, pimentowood.com.