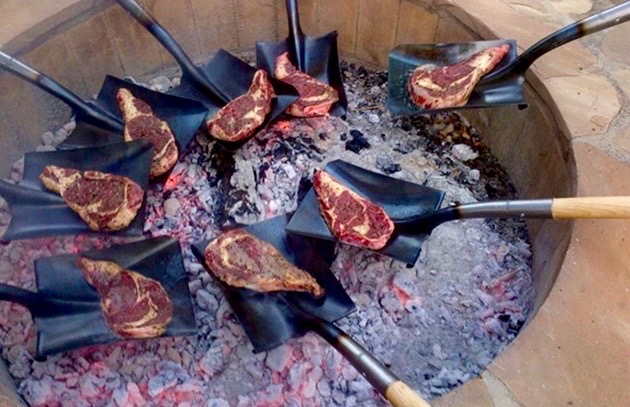 Now it’s time to tackle extreme steak grilling: That means on a shovel, grilled over spruce branches, wrapped in hay, in a salt and cloth crust, on a pitchfork, and my favorite—grilled directly on the embers.

For obvious reasons, we’re going to have to leave out steaks grilled over a trough of molten lava—a cooking stunt sponsored by “Lava Project” at Syracuse University and shared on Twitter and Facebook by Popular Mechanics.

Why extreme grilling? It takes you out of your comfort zone and adds a dimension of flavor you simply cannot achieve through conventional grilling. Besides, there’s nothing more theatrical (not to mention fun) than grilling a steak without the one piece of equipment most people consider indispensable for grilling: a grill grate.

Here are six variations on the theme, all of which produce great steaks.

Do YOU have an extreme method for cooking steaks? Please share it with us on the Barbecue Board.