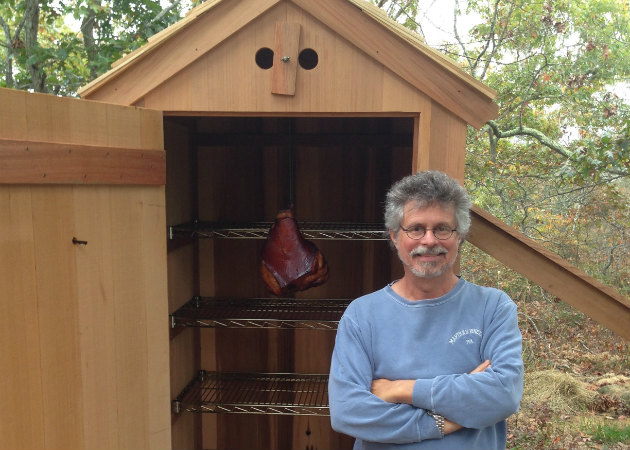 Happy New Year, everyone! 2015 was an incredible year for barbecuing and grilling. 2016 promises to be even better. Here are 10 trends I believe will shape the world of live fire cooking in the next 12 months.

Smoking is the new grilling. It used to be that most backyard smoking took place in the American barbecue belt. This year, thanks to the proliferation of affordable, easy-to-use smokers, smoking will go mainstream. After two decades of transforming our backyards into outdoor kitchens, we’ll install smokers in their rightful place—next to the grills owned by more than 75 percent of American families—and we’ll start smoking competition-quality briskets, bacon, and pulled pork at home. And just in time to help you master this often confusing subject: my next book, Project Smoke, due out in May 2016. Your grill will talk to your phone. Old-timers do it by feel: the way spareribs bend and tear when you lift the rack with your tongs. Or the shoulder blade pulls out of a Boston butt when you give it a gentle tug. This year, more than ever, we’ll rely on high-tech electronics to mastermind our smoking and grilling. Airflow regulators, like the BBQ Guru, to set the temperature of a ceramic cooker to the precise degree for overnight smoke sessions. Wireless thermometers, like the Maverick ET 737, that broadcast the temperature to your smartphone. Smokers like the Char-Broil Simple Smoker with SmartChef technology can be controlled with those same smartphones. The ultimate high-tech live fire cooking machine? The new voice-activated “SmartGrill” by Lynx. Deli dials home. Hot pastrami. Cold-smoked salmon. Kippers. Smoked ham. All used to require a trip to your local delicatessen. As more and more Americans acquire smokers, we’ll start preparing these deli classics at home. One of our most popular blog posts last year focused on home-smoked pastrami. Another was on salmon candy and hot smoked salmon. And thanks to devices like the Bradley Cold Smoke Adapter and Traeger Cold Smoker, we’re even attempting cold-smoked cheese, jerky, ham, and Nova Scotia-style salmon. Lesser known steaks. T-bones? Been there. Rib-eyes? Done that. This year we’ll discover some amazing lesser-known steaks. Like the terres major (a.k.a. shoulder tender or “mock tender”)—a super tender muscle cut from the shoulder second only in tenderness to a beef tenderloin. Or the flat iron (a.k.a. top blade steak)—another shoulder cut remarkable for its tenderness, soft texture and generous marbling. Then there’s the bavette (sirloin flap)—a long fibrous steak that hangs from the steer’s underbelly and is popular at French bistros. And the ultimate steak? That would be Argentina’s tapa de ojo: the uber marbled rim of a rib-eye steak. You can smoke everything—even caviar. Forget the Holy Trinity: brisket, ribs, and pork shoulder. This will be the year when we smoke everything—from soup to nuts to caviar to desserts. Pearl & Ash in New York City smokes flour to make bread. You could serve it with the smoked butter from Pig & Pickle in Scottsdale. The Broadmoor resort in Colorado Springs, home to Barbecue University, smokes ice cubes for its cocktails and raisins for its desserts. Alden & Harlow in Cambridge, Massachusetts, smokes the brioche for its amazing chocolate bread pudding. And on May 10, I’ll reveal on the new season of Project Smoke (sponsored by Maryland Public Television) what may be the most extreme smoked dish ever: hickory smoked ice cream with smoky rum raisin sauce. Sausage goes haute. It used to be that bratwurst was, well, bratwurst. Today, a new generation of craft sausage parlors is giving us the likes of double-smoked brisket bratwurst, paella sausage, and even a pork, ham, and cheese cubano modeled on Havana’s famous sandwich. All three are specialties of Jake’s Handcrafted in Brooklyn, New York, where chef-turned-sausage impresario Jake Klein (my stepson) channels world cuisines in a sausage casing. Look for similar innovations at Wurstküche in Santa Monica and Denver, Ils En Fument du Bon in Montreal, and Rosamunde in San Francisco and other locations. Bacon 24/7. Yeah, I know, we’ve been in the throes of bacon mania for more than a decade. But beyond bacon jam, bacon weaves, and bacon brownies, we’re doing something new with bacon. We’re actually making it from scratch at home. Whole Foods now sells pork bellies and Amazon.com now carries Prague Powder (an essential curing salt). And thanks to the new digitally controlled smokers that maintain consistent warm smoke temperatures of 160 degrees, smoking your own bacon is a cinch. As for what to do with your smoky masterpiece: two of our most popular recipes on BarbecueBible.com are the onion bomb and bacon-wrapped onion rings. Wood-burning grills in top-flight restaurants. You know there’s a revolution brewing when three tony new restaurants with massive wood-burning grills as their focal point open within 8 square city blocks in your home town. That’s what’s happening on Miami Beach with the recent opening of Tom Colicchio’s Beachcraft at the One Hotel (fired by the largest Grillworks wood-burner in the U.S.), Klima, with its charcoal-burning combination Josper grill-oven from Spain, and the soon-to-open Los Fuegos by South American grill master Francis Mallmann. Elsewhere in the U.S., check out Parts & Labor in Baltimore, OX in Portland, Oregon, and Aestus in Los Angeles. Pellet grills grow up. Maybe it was the expiration in 2006 of the patent originally held by Traeger. Or maybe it’s the sheer convenience of these outdoor cookers fueled by hardwood pellets, ignited with the push of a button, and controlled with the turn of a thermostat. Whatever the reason, pellet grills have become one of the fastest growing categories in outdoor cookers. As their versatility grows, so does their popularity. The Memphis Wood Fire Grill, for example, comes with a digital temperature controller and allows you to direct grill over a live fire. Some companies have introduced portable models and cold smoker attachments. Barbecue where you least expect it. You expect to find great barbecue in Texas or North Carolina. You’re no longer surprised when you come across it in Portland, Oregon, or Brooklyn, New York. But Paris? Montreal? Or authentic Kansas City-style barbecue in Dallas? Well, recent travels around Planet Barbecue have taught me to expect the unexpected. Consider The Beast, an authentic Texas-style barbecue joint in the 4th arrondissement in Paris, where fork-tender briskets and slide-off-the-bone ribs emerge from a giant J & R smoker. Or La Vin Papillon, the sizzling new wine bar in Montreal, where David McMillan (of Joe Beef fame) installed a charcoal-burning grill in the backyard to grill up king crab, clams, and rabbit. Even that capital of barbecue, Dallas, delivers some unexpected surprises. Consider the new 18th and Vine, where Kansas City-born pit boss Matt Dallman joined forces with fine dining chef Scott Gottlich to serve the likes of Brisket Stroganoff and BBQ Braised Beef Cheek (with parsnip cacio e pepe!) alongside textbook tender Kansas City ribs. Matt Dallman of 18th and Vine

What’s happening on your grill or in your town? Have you spotted a new trend in barbecue?