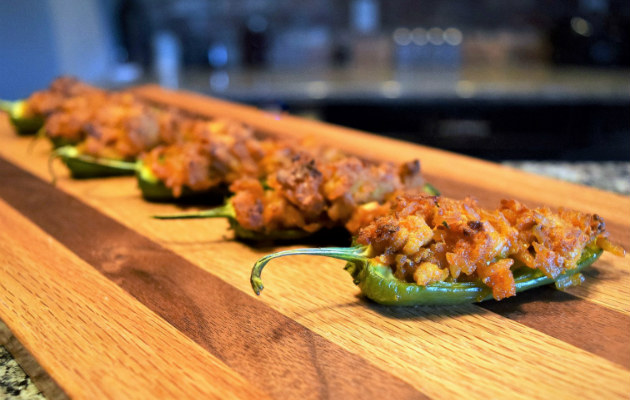 You may know them as jalapeño poppers, armadillo eggs, rattlesnake eggs, or even ABTs. Whatever you call them, stuffed smoked jalapeños rock the grill across the U.S.

A bite-size variant of Mexican chiles rellenos, poppers have been around since the 1970s. Early versions were typically stuffed with cheese, then breaded and fried. Naturally, it didn’t take barbecuers long to discover these babies were even better when grilled.

A Facebook query on the “Primal Grill with Steven Raichlen” group motivated today’s blog post. Chris S. wrote, “Can anyone provide an easy recipe for grilled jalapeño poppers?” Absolutely, Chris. (And thanks, as always, to the other folks who responded promptly on social media.)

The easiest poppers are made by spooning cream cheese or goat cheese into jalapeños that have been halved and seeded, wrapped with bacon (optional), and indirect grilled until the chiles are soft and the filling is bubbly. (Even better, use a jalapeño pepper rack to roast the pepper upright. It even comes with a handy corer.) Of course you can energize the filling with herbs, spices, and even Thai curry paste.

Below are five of my favorites. I’d love to hear yours and so would our barbecue community at large (connect on Facebook, Twitter, or the Barbecue Board).

Bacon-Cheddar Poppers: A classic combination rides again. Great with sour cream and thinly sliced scallions. Or, take it in a Tex-Mex direction by substituting pepper Jack cheese for the cheddar. Serve with a smoky homemade salsa like my Smoked Corn Salsa or Salsa Verde.

Thai Chicken Curry Poppers (see photo above): All the flavors of authentic chicken curry in a bite or two. You’ll blow minds with this one.

Snow Crab Bacon Poppers: One of my favorite poppers recipes—it pays homage to my home state of Maryland by adding a half cup of fresh corn kernels and a couple of generous dashes of Old Bay seasoning. Wrapped with bacon? Hella good.

Buffalo Chicken Poppers: Halve and seed 10 jalapeño peppers. Sauté 1/4 cup of finely diced celery in 2 tablespoons of butter over medium heat. Stir in 1 cup of finely diced grilled or smoked chicken (dark or white meat) and 3 tablespoons or more of Frank’s RedHot or other Louisiana-style hot sauce. In the meantime, combine 6 ounces of room temperature cream cheese and 1/4 cup of finely crumbled blue cheese. Add the chicken/hot sauce mixture to the cheeses and blend. Stuff the peppers and grill indirectly over medium heat (375 degrees F) for 20 to 25 minutes.

TIPS FOR TAKING YOUR POPPERS TO THE NEXT LEVEL: