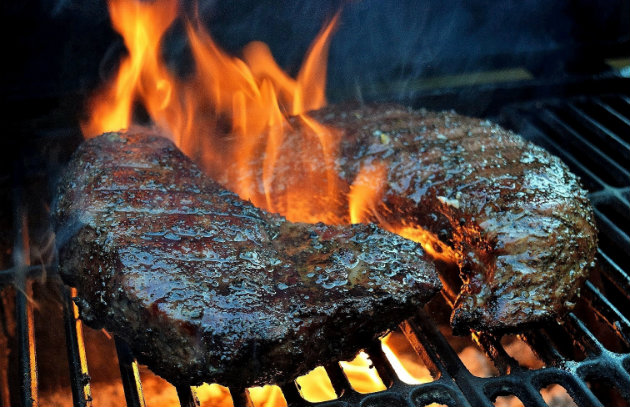 “The only time to eat diet food is while you’re waiting for the steak to cook.”
—Julia Child

Flat iron? Calotte? Teres major? Meet the new steaks, and don’t feel badly if you haven’t heard of them. A few years ago, the Beef Checkoff program teamed up with meat scientists from the University of Florida and the University of Nebraska to identify value cuts for consumers while minimizing “trim”—the bits that are ground into hamburger. They focused most of their efforts on the chuck (shoulder) and the round (hind leg), well-exercised muscles that are robustly flavored and tender if cooked properly.

The results mean good news for grillers as most of these so-called “chef’s cuts” (because chefs prize these flavorful cuts and pioneered them) are eminently well suited to the high dry heat of the grill. They can be marinated, rubbed, sauced, stuffed, or seasoned simply with salt and pepper. For maximum tenderness, cook to medium-rare, let rest, then slice thinly on a diagonal against the grain. Some of these steaks have been slow to come to market—another good reason to make fast friends with your butcher. Sirloin butt strip steaks on the left; flat iron steak on the right.

Flat Iron Steak: Also known as top blade steak, this boneless cut is the first of the new steaks to become a runaway commercial success, outselling T-bones and porterhouses. For tenderness, it is second only to filet mignon, say the meat scientists. Surprising, as unlike most steaks, it’s cut with the grain. There are four steaks per animal, each an even thickness and between 6 and 8 ounces. Beefy-tasting with a fine texture and good marbling, this steak wallowed in obscurity for so long because of a medial line of gristle—almost always removed before sale. The name flat iron is an old meat industry term thought to be inspired by the flat irons used by laundresses in days gone by.

Rib-Eye Cap: What’s in a name? A lot. Ralph Lifshitz didn’t become a household name until he rechristened himself Ralph Lauren. The real name of the rib-eye cap is spinalis dorsi. But an unsexy moniker—the French call it calotte—can’t take anything away from this luscious cut, the tender and flavorful rind of rib-eye. (Maybe deckle’s a better word than rind.) It’s a rarity in butcher shops, although premium meat purveyor Snake River Farms sells it on their website. Or you can buy a hunk of prime rib and carve it off the eye yourself along the natural separation. Whole, it’s 16 to 18 inches long, about 8 inches wide, and around an inch thick. The research team mentioned above ranks it third in tenderness behind beef tenderloin and flat iron steak. One of the richest, beefiest bites on Planet Barbecue.

Shoulder Petite Tender: Teres major is a hidden gem in the shoulder clod. Weighing 3/4 to 1 pound, it resembles nothing so much as a small beef tenderloin. It can be smoke-roasted whole or sliced into medallions like filets mignon. The shoulder petite tender (which incidentally, is tender) has more flavor than its pricy counterpart. There is almost no waste, though we urge you to remove any silverskin if the butcher has not done so. Use it to make a version of Steven’s “Ultimate Cheesesteak.”

Denver Steak: The Japanese call this pillowy cut from the underblade of the chuck zabuton after a cushion used in Zen meditation. But focus groups in the U.S. liked the sound and easy memorability of Denver cut. (Confusingly, this steak is sometimes sold as boneless short ribs, though it isn’t a rib at all.) Found deep in the shoulder, this richly marbled cut is very grillable. Not widely available yet. But it will be.

Top Sirloin Butt Strip Steak: Top sirloin cap (from the loin primal) is one of the most popular cuts of meat in Brazil where it’s known as picanha. Top sirloin butt strip steaks are harvested from the same muscle. Because these steaks are very lean, be careful not to overcook and slice thinly against the grain. A little coarse salt is all that’s needed to bring out their great flavor. Try on sandwiches, specifically, Steven’s version of chivito—a steak and egg sandwich from Uruguay.

Read more in The New Cuts of Steak, Part 2.