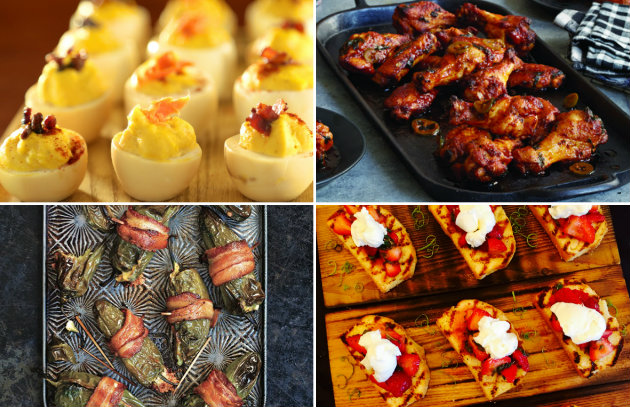 The suspense is over: The New England Patriots will face the Atlanta Falcons in Super Bowl LI (that’s 51 if your recall of Roman numerals is rusty) on Sunday, February 5, at NRG Stadium in Houston, Texas.

If you’re among the estimated 45 million Americans who will be hosting game day festivities at your house, the party planning can now begin in earnest.

Super Bowl Sunday is, after all, one of the biggest eating days of the year, second only to Thanksgiving. And planning a menu—especially around grilling and smoking—is half the fun. There are several different approaches you can take:

As you decide, here are points to keep in mind:

Finally, here are just a few of the menu ideas we’re planning. (Since Steven is a part-time Massachusetts resident, we’re not exactly bipartisan.)

Barbecued Peanuts: In a nod to the Atlanta Falcons’ home state of Georgia, we present barbecued peanuts from Steven’s BBQ USA. Salty, spicy, and smoky, we can’t think of a better beer-friendly pre-game snack.

Smoked Deviled “Falcon” Eggs: These may be the best deviled eggs you and your guests will ever experience. (They certainly rocked the set of Project Smoke.) Creative optional toppings could include slivers of black olives and roasted red peppers—black and red are the Falcons’ team colors—or brisket, pulled pork, smoked salmon, or bacon. Grilled Clams with Sambuca and Italian Sausage: Clams are one of the iconic foods of coastal New England. Steven rakes his from Katama Bay near his home on Chappaquiddick. These, stuffed with savory Italian sausage and a splash of anisey sambuca, will win over even people who think they don’t like clams. (A shellfish rack is a handy tool for keeping them upright on the grill.) Don’t forget to provide a bowl for the shells.

Fire-Eater Chicken Wings or Drumsticks: Americans demolish chicken wings on Super Bowl Sunday; last year, we ate 1.25 billion of them while watching the game. And while we love wings, we’re open to substituting meatier chicken drumsticks in this incendiary recipe. Your choice. (If children will be attending your party, grill some plain wings or drumsticks. Their parents will thank you.) Crab Jalapeño Poppers: Another popular Super Bowl bite is jalapeño poppers, known in barbecue circles as ABTs. (We’ll leave that one to your imagination.) Assemble them the day before the party. We occasionally add corn (grilled at a previous grill session) for texture and visual appeal. Just slice it off the cob using long strokes of a chef’s knife.