How to Smoke a Whole Pig 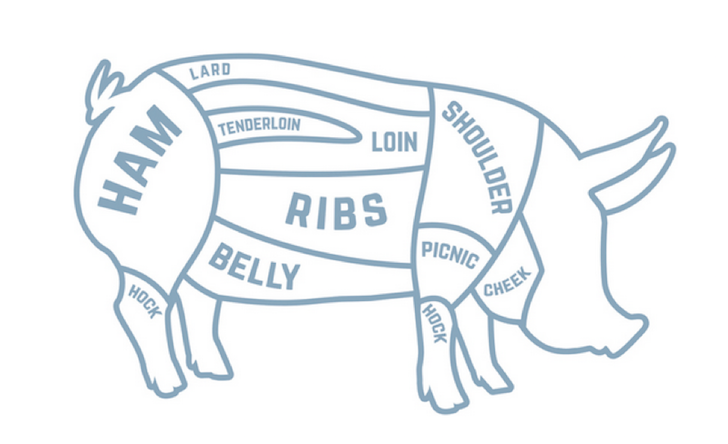 A whole pig is the apex of barbecue. As you climb the ladder of smoking enlightenment, at some point you’ll want to try one. There are too many variables (hog size, smoker design, weather, wood, and so on) to cover in a single recipe, but here are the basic guidelines.

The pig: Hogs range in size from 20-pound suckling pigs to 225-pound behemoths. The first time you smoke a hog, I recommend a 50-pounder (that’s gutted weight, by the way, but with the head on). It’s small enough to handle by yourself, and it’ll cook in half a day—yet, it’s large enough to establish your smoking credibility. You’ll need to order your pig ahead of time. As always, look for organic or heritage breeds from small local farms. Ideally, you’ll pick it up the morning you plan to smoke it as few of us can refrigerate a whole hog. In a pinch, you can keep the meat in a large insulated cooler or in a bathtub filled with ice. (When using the latter, be sure to warn the family in advance! No one wants to pull back the shower curtain on Porky.)

The cut: Pigs smoked whole with legs tucked under the body are what you often see at barbecue competitions. But I prefer a butterflied pig—split through the belly to the backbone and opened up like a book. Why? When you smoke a whole hog, in effect, you stew the meat in the skin. Yes, it comes out juicy and tender, but sometimes with a stewed quality. I like my pork with some crust and chew to it. When you smoke a butterflied hog, you expose more of the meat to the smoke and fire.

The smoker: You’ll need a serious smoker, especially for larger animals. That puts you in competition rig territory. Respected brands include Horizon, Yoder, Klose, Lang, Pitt’s & Spitt’s, Backwoods, and Cookshack. (Of course, you can improvise a pit in your own back yard if you have friends and enough beer to sustain them.) Another alternative, especially popular here in Miami, is the Cuban caja china (Chinese box). Picture a wooden or steel box with an indented metal top. You pile lit charcoal on the metal lid, turning the box into an outdoor oven. The result: amazingly moist, tender pork, albeit without the flavor of wood smoke. Attach a smoke generator, however, and you can fix that. You can also smoke a 50-pounder on a Weber Ranch, a large pellet smoker, or an XXXL Big Green Egg or other jumbo-size kamado-style cooker.

The fuel: You can burn charcoal and boost the smoke with wood chunks or wood chips (the latter soaked in water for at least 30 minutes, then drained). Or you can build a wood fire. You’ll need at least an hour to lay down a good bed of embers. Add two or three logs an hour to maintain the heat and generate smoke. Texans use oak, Southerners use hickory, and Midwesterners burn apple. Any seasoned hardwood will give you great results. Make sure you have good airflow so the smoke passes over the meat instead of smothering it.

The temperature: There are many schools of thought here: low and slow in the style of traditional Southern barbecue, or hot and fast in the style of Texas. The larger the pig, the lower the heat you need to cook it through without burning the exterior. I recommend a target temperature of 225 to 250 degrees. (For a suckling pig, you could go as high as 325 degrees.)
Mop it every 30 minutes with a flavorful mop sauce like my Cider Squirt Mop Sauce. I also like to cover the ears with foil after 2 or 3 hours as they tend to cook more quickly than the rest of the animal.

Timing: The time it takes to cook your pig depends on many factors. But your goal is an internal temperature of about 195 degrees in the shoulders and 175 degrees in the deepest part of the hams (the upper hind leg). The bones should pop loosely out of the meat. As a very rough guide, figure on 1 to 1 1/2 hours for every 10 pounds of pig. Thus, a 50-pounder will take 5 to 7 hours; a 180-pounder needs more like 18 hours. For a really small pig, you’ll need to bump up the time; a 20-pounder will still require 3 1/2 to 4 hours.

Serving your pig: One of the ironies of going “whole hog” is that for all the effort you expend roasting and showing it off whole, serving it involves shredding or chopping it into tiny bits, then dousing it with vinegar sauce and piling it on a bun. Wearing insulated rubber gloves, pull large chunks of meat away from the bones, discarding the bones and any large lumps of fat. Set the skin aside for crisping (see below). Cut the ribs into individual bones. Transfer the meat (shoulder, hams, loin, and tenderloins) to a cutting board and chop it with a heavy cleaver, or shred it with meat claws. To cut the fattiness of the meat, serve it with a Carolina-style vinegar sauce.

Don’t forget the skin: During the smoking process, the skin will become tough and leathery (and richly infused with wood smoke). Pull it off with your gloved hands. Using a knife, scrape away and discard the excess fat, then tear or cut the skin into 5- or 6-inch squares. Direct grill the squares over a hot fire, starting fat side down, until crisp. Alternatively, deep-fry the skin in hot oil or lard. Chop or break the crisp skin (now called cracklings) into bits and sprinkle them over the meat.

How many will it serve? Figure on 1 1/2 pounds of raw meat, or 6 to 8 ounces of cooked meat per person. (This will be a generous serving. But you’re a generous person, right?) You can get by with less if the meat is destined for sandwiches, especially if you serve several side dishes. (These baked beans are the bomb!)