Glam Up Your Ham This Easter: Tips, Tricks, and Recipes 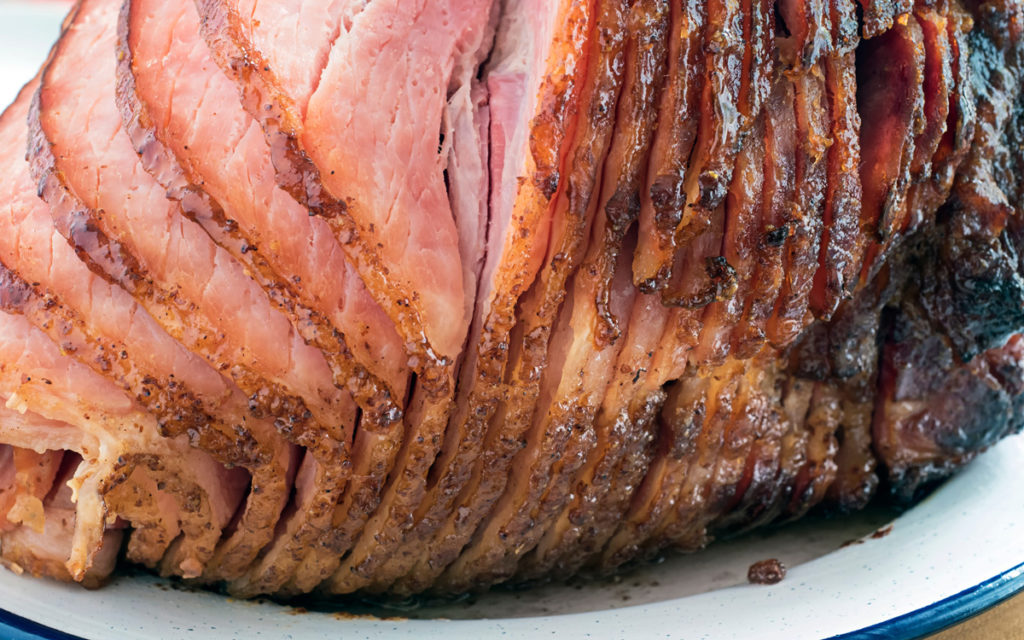 Does your Easter ham, the rosy centerpiece of the holiday table, look as if it came straight from the pages of Good Housekeeping, circa 1960-something—studded with whole cloves, draped with canned pineapple rings and lurid maraschino cherries?

Maybe it’s time for an ambush makeover. After all, the first Sunday after the first full moon after the spring equinox (aka, Easter Sunday) is coming up fast. But not to worry: You’ll find everything you need right here to make this year’s ham a stand-out, from bastes and glazes to cooking methods.

We usually buy a precooked bone-in cured “city” ham (they come in half or whole sizes), preferably heritage-breed, one surrounded by subcutaneous fat. Remove any rind/skin before reheating as it impedes the absorption of flavors from bastes, glazes, etc. Though they get points for convenience, spiral-cut hams dry out more quickly due to their vastly-increased surface area. They’re best when cooked cut side down in a sturdy drip pan.

Here are some of our tricks for making your Easter ham the best yet!

Injecting a ham with a large hypodermic-like syringe takes flavors deep into the muscle and keeps the ham moist. (Do not try this on a spiral-cut ham.) You can inject the ham with soda pop (Dr. Pepper, cola, and root beer are favorites), fruit juice, or a thin sauce of your own making. For example, melt 4 tablespoons of butter, 4 tablespoons maple syrup, 2 teaspoons of Dijon mustard, 3/4 cup apple cider, and 1/3 cup of bourbon (optional). Keep warm. Place the ham in in a large drip pan and inject according to the directions that accompanied the injector. Cook the ham as usual, basting with any leftover injection sauce. 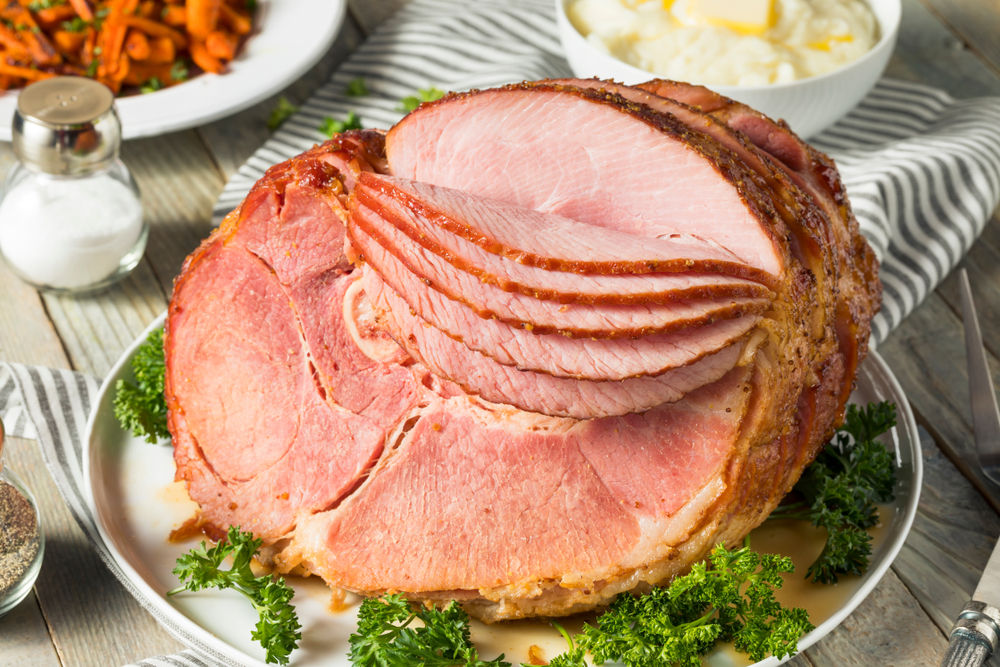 While you might expect us to recommend a dry rub for ham, most are too salty. An exception is Steven’s Salt-Free Lemonade Chili Rub, found in his book, Sauces, Rubs, and Marinades. Slathers (wet rubs or pastes) work better, especially one made with a combination of your favorite mustard(s), a couple of tablespoons of maple syrup or molasses (pomegranate molasses is nice), brown sugar, and a splash of whiskey, rum, or fruit juice. Ground cinnamon, cloves, and nutmeg are optional. Mix it in a bowl until you love the flavors. Score the fat in a diamond pattern, if desired, then generously slather all sides with the paste.

If your crowd loves heat, consider weaponizing your ham with Steven’s authentic Jerk Seasoning. Then indirect grill. Not recommended for young children!

These are used to keep foods moist during grilling. They can be as simple as beer, broth, fruit juice, or soda pop, or more elaborate. Some are enriched with a fat, like melted butter, olive oil, or bacon grease. Cider Squirt, from Sauces, Rubs, and Marinades complements ham beautifully. To use, liberally spray or mop the baste on the ham after the first hour; reapply every half hour thereafter.

Alternatively, place 1 to 2 cups of the mop sauce in the bottom of a disposable roaster, outfit with a rack, and reheat the ham, periodically basting it with the drippings using a bulb-type baster.

Glazes are formulated to give a glossy sheen to the finished meat. They usually have a high sugar content, and like sweet barbecue sauces, are generally applied near the end of the cook time to prevent them from scorching.

There are many options. You can melt your favorite jelly—apple, wine, currant, red pepper jelly, and so on—brushing it on the ham a couple of times during the last hour of the cook. (For the sake of aesthetics, we tend to shy away from purple jellies or green pepper jelly.) Or use the jelly (or even jam) as a base, then add other ingredients, such as brown sugar, maple syrup, honey, mustard, fruit juice, wine, port, sherry, butter, horseradish, or compatible spices like ground cinnamon, anise, or cloves. Be creative!

If you prefer to work with a net, Steven’s Not-Just-for-Ham Glaze can be found here. 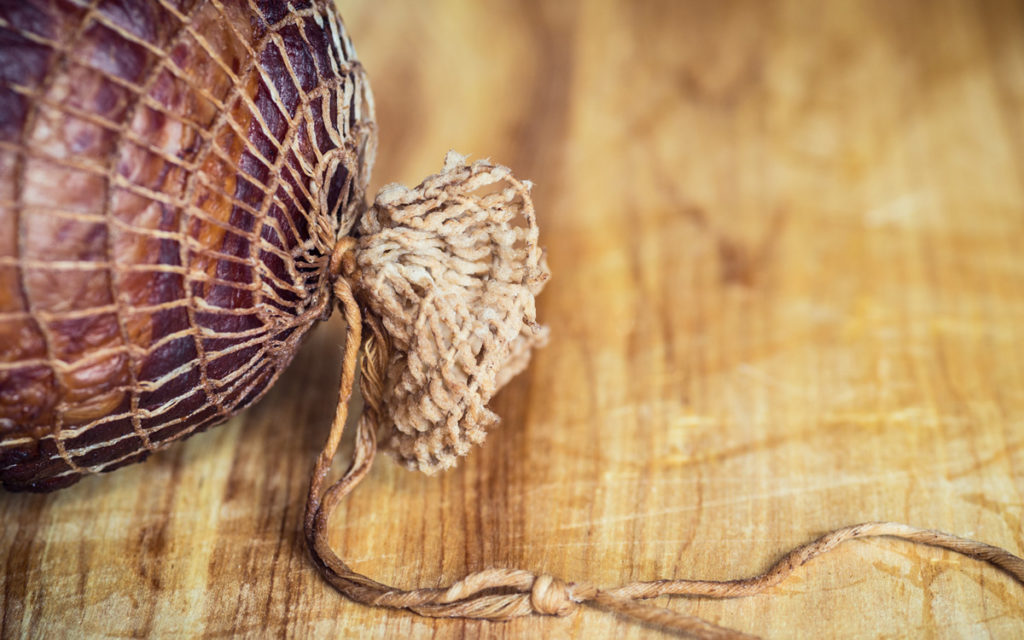 You may not need or want a sauce. But some diners appreciate an array of mustards—Dijon, whole grain, or any one of the gourmet mustards found in stores and online. Fruit salsas are also an option, and will update your ham instantly.

And if you are loathe to give up those iconic pineapple rings with the cherries, lightly sugar and grill fresh pineapple rings, then decorate their centers with decadent Luxardo cherries. They’re fantastic in Smoked Manhattans, too.

With the exception of raw or “country” hams, most hams come precooked. So you’ll likely want to reheat the ham to serving temperature—about 135 degrees. There are several ways to do this:

In the meantime, Happy Easter and/or Spring!