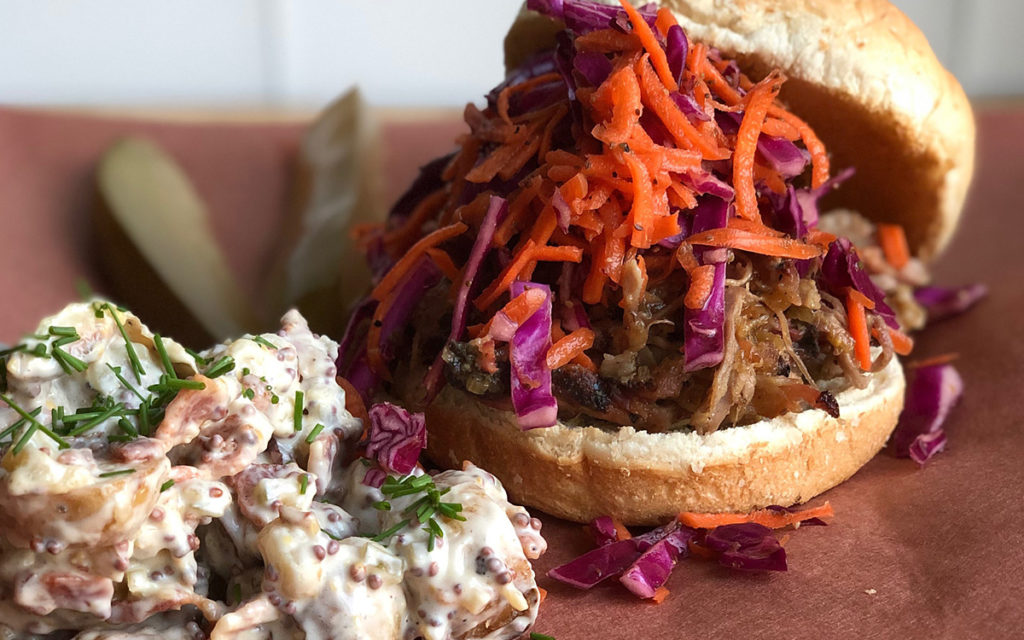 What is the Snake Method?

The snake method is one way to perform a low and slow cook on a charcoal grill. It is a variation of the Minion method named after Jim Minion. The Weber kettle is often the grill of choice when utilizing the snake method. The inside of the kettle grill is lined with charcoal briquettes barely touching the next briquette to form a large “C” around the ring of the grill. Wood chips or chucks are worked in to create smoke. One end of the “C” is ignited, and in theory, the briquettes slowly burn around the periphery of the grill. The goal is to achieve a consistent temperature and a long burn for a true low and slow cook. Can it be done with the snake method? 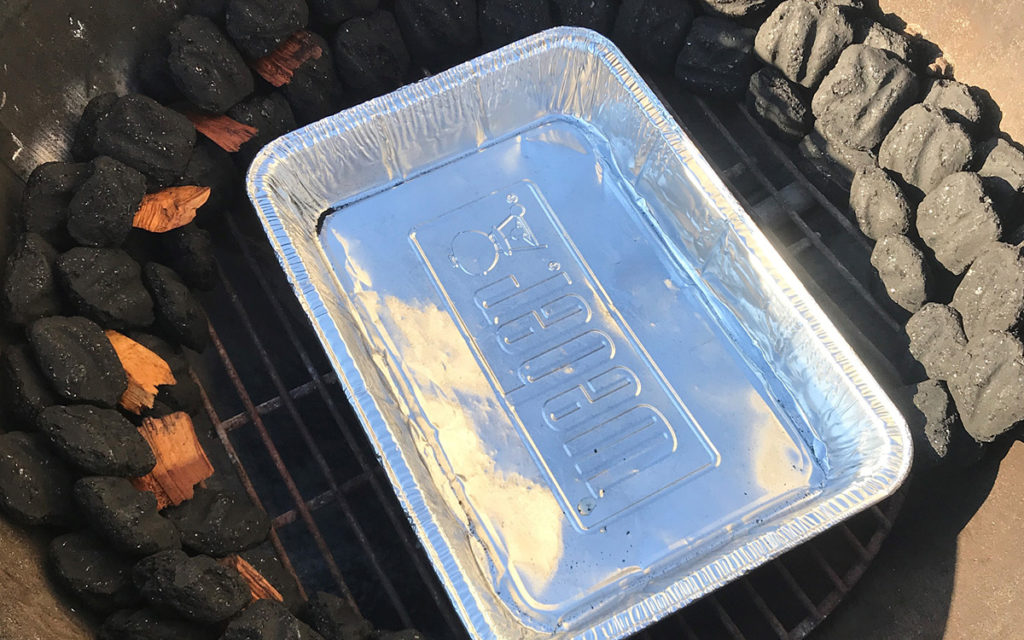 I wanted to see if I could utilize the snake method for a low and slow cook of a whole 14-pound brisket in the kettle grill. I was curious to see if I could obtain a temperature between 250 and 275 degrees and pinpoint the length of time required to produce smoke, bark, and a juicy brisket. Some barbecue enthusiasts claim the snake will last 8-plus hours. I wasn’t sure. I did not want to risk an expensive brisket on my first go with the snake, so I ran 3 tests.

I ran 2 tests with just briquettes (for 1/3 of a full snake) to determine how long it takes to come up to temperature and predict total cooking time for a full snake.

The first test was started with 4 lit briquettes. It took 1.5 hours to get to 200 degrees. The 1/3 snake lasted 3 hours. The temperature (on the lower end of the smoking range) was a disappointment, but the time was promising. A 2- or 3-briquette set-up might be a better option for cold-smoking for salts, nuts, cheeses, or salmon, or jerky.

Eight lit briquettes were used to start the second test to get up to temperature sooner. Temperatures at the one-, two-, and three-hour marks were 248, 290, and 263. The temperature may have stayed consistent at the 290 range, but I only had 1/3 of a snake set up. Again, the snake lasted 3 hours. The temperature was hotter than I wanted, but now knew I could control the temperature with briquette configuration and the vents.

Test three was a full snake for a 5-pound pork butt. The snake was set up in a 4-briquette configuration with soaked hardwood chips and small hardwood chunks as described above.

The pork butt was lightly rubbed with yellow mustard, seasoned with a homemade barbecue rub, and refrigerated overnight.

One cool technique I discovered during my research was flipping over the chimney starter and using the smaller bottom when only lighting a few briquettes. Eight briquettes were started in the bottom of chimney starter, and 12 minutes later, they were added to the unlit snake.

It took 30 minutes for the snake to come up to 250 degrees. Hot water was poured in the drip pan and the pork was placed in the center of the grill. Temperatures were monitored with 3 probes— one probe in the pork and two on the grill. The top vent was positioned opposite the snake to draw the smoke up over the pork. 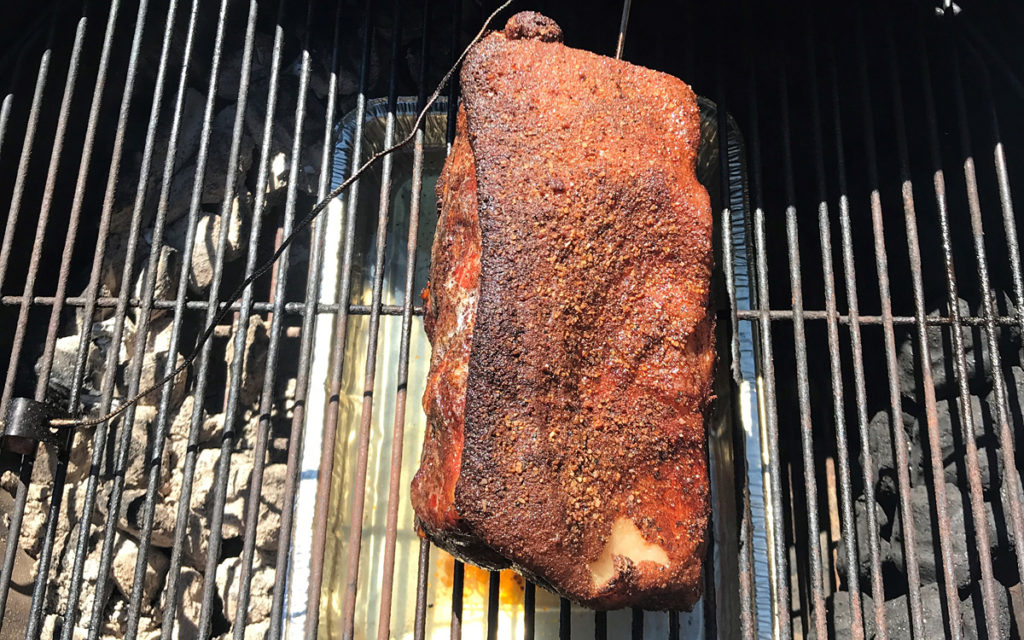 The snake was coming to the end at the six-hour mark. I knew I would need more time to finish the pork, so I added 8 unlit briquettes to the snake (I wrapped the pork at 160 degrees). At the 7-hour mark the grill temperature was fading at 221 and the pork was 190. I added an additional 8 briquettes and reversed the snake. I was able to bring the temperature back up to a consistent 240 and finished at 7 hours and 45 minutes when the pork butt hit 203.

The bone pulled right out of the pork. The pork was pulled and tossed with Steven’s Carolina Vinegar Sauce. Sandwiches were topped with Steven’s Mustard and Brown Sugar Sauce and homemade slaw. Homemade sides included smoked potato salad and dill pickle spears. 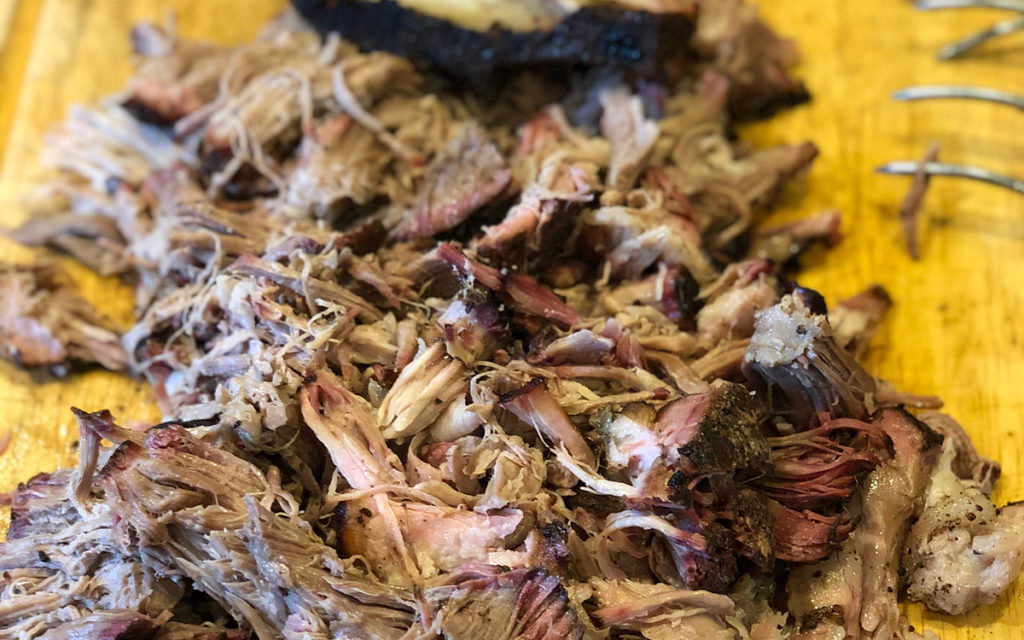 Testing Results for the Snake Method

The results? The snake method lasted a solid 6 hours. Not long enough for a whole brisket. So, it might be better for pork ribs than a brisket. Reversing the snake at the end to extend the cook time could make it possible to cook a pork butt (shoulder), pork belly, lamb shanks, or a brisket flat.

If you were going to run a snake at higher temperature as in test two, you might consider chicken or turkey. Higher temperatures are needed to crisp the skin (325 and above). The snake can be a “no fuss” way to smoke once you dial in your temperature and cook time. No briquettes or wood to add. The grill lid was only opened to spray the pork. The temperature was monitored with a with a remote thermometer.

My last suggestion will surely ignite some debate. Burn the snake to the end to obtain a smoky flavor and develop bark on your food. Wrap, if desired. If the food requires more time, move it to a gas grill, set up for indirect grilling, and dial in your temperature to finish the cook.