From Plantation to Barbecue Joint: The Black Contribution to American Barbecue

By Jessica B. Harris 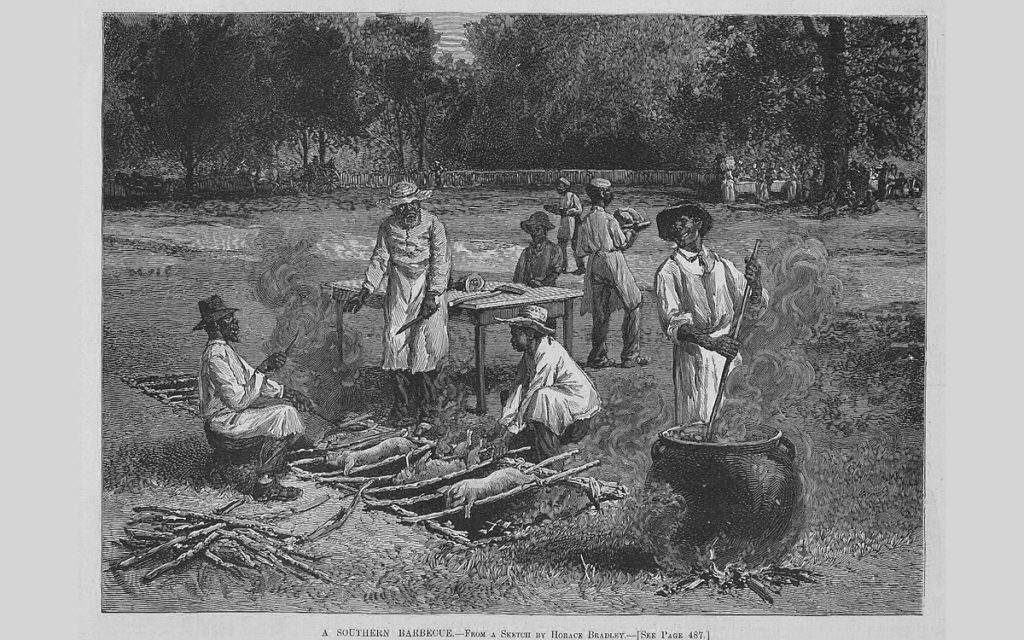 The Aaron Franklins and Billy Durneys of the world get a lot of attention for their smoked meats. But long before they cooked their first briskets, generations of Black American pit masters laid the groundwork for that great and uniquely American culinary tradition we know as barbecue.   I asked my friend and culinary historian, Jessica Harris, to write a guest blog this month telling us more about the Black contribution to American barbecue. As the author of such books as High on The Hog: A Culinary Journey from Africa to America and Iron Pots & Wooden Spoons: Africa’s Gifts to New World Cooking, Jessica is eminently qualified to help set the record straight. She recently received a Lifetime Achievement Award from the James Beard Foundation. Congratulations, Jessica! Read on.

“Night before the barbecues, I used to stay up all night cooking and basting the meats with barbecue sauce. It was made of vinegar, black and red pepper, salt, butter, a little sage, coriander, basil, onion, and garlic. Some folks drop a little sugar in it. On a long pronged stick, I wrapped a soft rag or cotton for a swab, and all night long, I swabbed the meat until it dripped into the fire. The drippings changed the smoke into seasoned fumes that smoked the meat. We turned the meat over and swabbed it that way all night long until it oozed seasoning and was baked all through.”

Thus recalled a former enslaved African American whose narrative was recorded by the WPA (Work Projects Administration) in the 1930s—a collection of 2,300 first person accounts of slavery. He spoke of an art inextricably interwoven with American cuisine—since our country’s founding and long before—an art every bit as near and dear to our hearts today: barbecue.

Simply defined, barbecue is meat slow-cooked over direct or indirect flame with wood smoke providing its flavor—and its soul. But there’s nothing simple about barbecue—not even about the word, which can be used as a verb, an adjective, or a noun. As a verb, barbecue means to cook meat low and slow over or next to a smoky fire, and more generally to cook meat outdoors. As an adjective, barbecue describes both a method and style of cooking. When used as a noun, its complexities become even more apparent, with at least three different meanings:

And that’s before we get to regional barbecue, because in Texas, the word probably means brisket, in Memphis, ribs, in North Carolina, pulled pork, and in Salinas, California, grilled oysters.

Certainly, the conjoining of meat and flame has taken place for millennia in different parts of the world. There are grills and kebabs and mechoui and more, but the word that is dear to the hearts and stomachs of the New World comes from the Caribbean term barbacoa, the Taino word for the grill on which the meat was cooked. 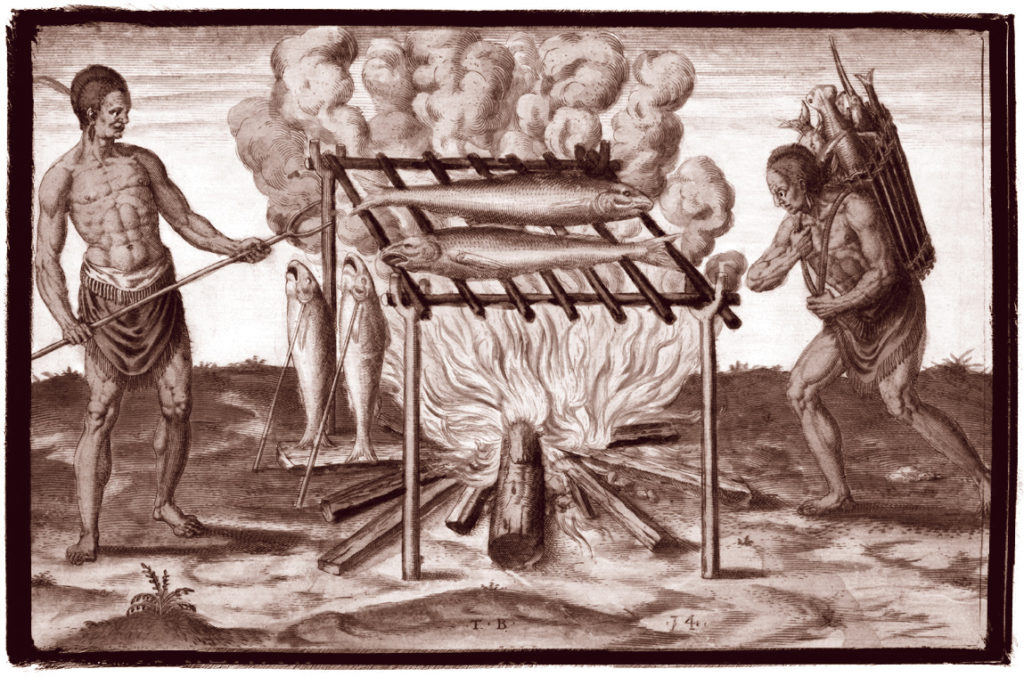 According to barbecue historian Lolis Eric Elie, author of the seminal book Smokestack Lightning, the word barbacoa first appeared in print in Gonzalo Fernandez de Oviedo’s 1526 account of his travels in the West Indies, De la Historia General y Natural de las Indias. It referred to a cooking device used by the Indians of Terra Firme, who roasted meat on sticks “like a grating or trivet over a pit.” Thus, the Spanish hidalgo uses the term to describe not a food or a method of cooking, but as a device: the grill upon which the food was cooked.

If the Caribbean region gave our unique culinary form its name, barbecue, the uniquely hemispheric cooking form was perfected in the hands of Black pit masters in the American South. At plantations throughout the South, barbecues (in the second sense of the word) were often staged when there were guests or festivities at the Big House. The cooks for these events were enslaved and free black men who used their talents to create an iconic Afro-Southern dish. The cooking ritual was a complex process replicated today by Black pit masters throughout the South. 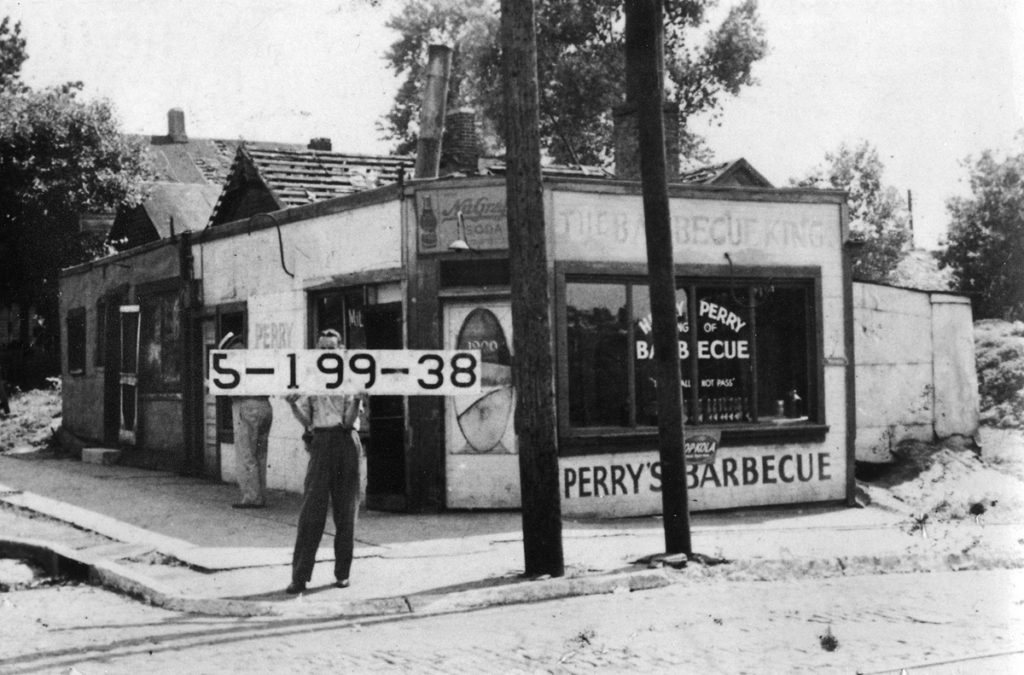 That same basic process of slow cooking over smoke took place throughout the barbecue belt that runs from Maryland on down through Mississippi. Post Emancipation, it was carried North and West with The Great Migration by the likes of Henry Perry, born in Shelby County, Tennessee, who learned his trade working in steamboat kitchens plying the Mississippi River, and opened the first barbecue restaurant in Kansas City. Other early Black barbecue entrepreneurs included Arthur Bryant and George Gates of Kansas City and John “Big Daddy” Bishop of Dreamland Barbecue in Tuscaloosa, Alabama. 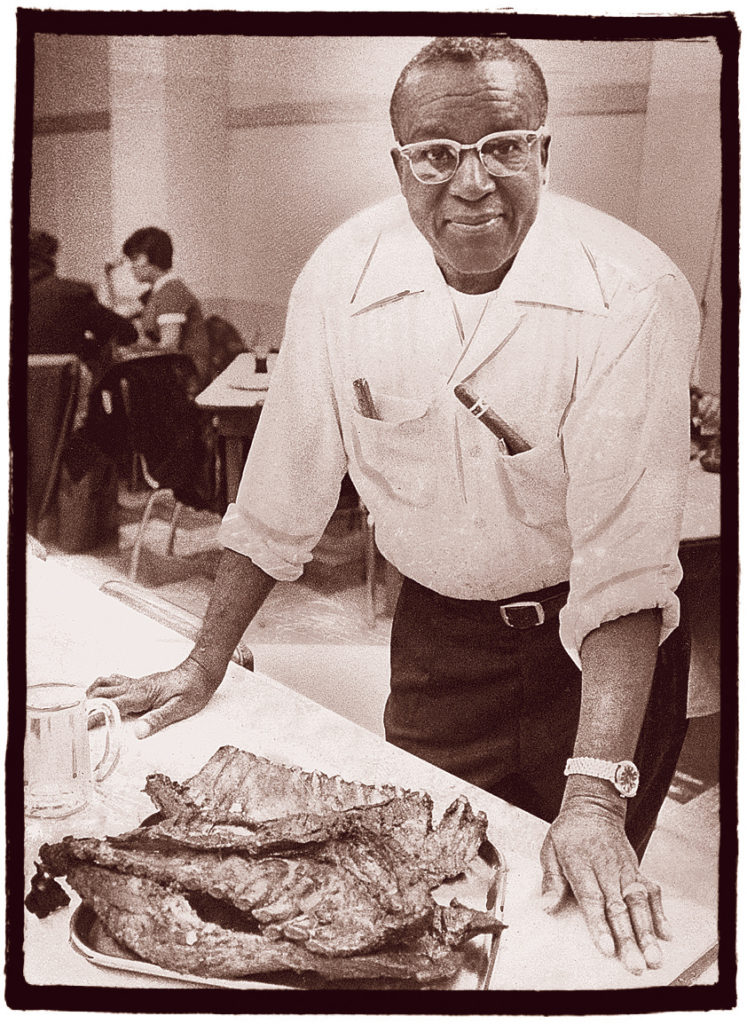 As Black barbecue masters spread across the South and Midwest, their mop sauces evolved, and so did their marinades, rubs , and barbecue sauces. Barbecue scholars, and they are legion, have disserted on regional and even local differences. Competitions (pre-Covid, at least) have evolved into events attended by tens of thousands, with judging done by professional judges who attend “school” to become certified.

While the African American hand in the creation and development of American barbecue is often acknowledged, there have been surprisingly few books on the subject. Happily, that’s about to change. Soon background, history, and recipes will be available in the forthcoming work of African American pit masters and scholars: Culinary Historian Adrian Miller’s book, Black Smoke: African Americans and the United States of Barbecue will be published by the University of North Carolina Press in 2021, and rocket scientist and pit master Howard Conyers is also working on a book on the African American roots of the art of barbecue. There are cookbooks due out by master pit men Rodney Scott of Rodney Scott’s Whole Hog BBQ in Charleston, South Carolina, and Kevin Bludso of Bludso’s Bar & Que West Hollywood, California. (By the way, Bludso’s delivers barbecue nationwide. Call them at (323) 931-2583.)

We can’t wait for them to set the record straight.

African American novelist and anthropologist Zora Neale Hurston in her 1942 work, Dust Tracks on a Road, wrote, “Maybe all of us who do not have the good fortune to meet or meet again, in this world, will meet at a barbecue.” I’d like to add, with the new works coming out and while nibbling on burnt ends, sucking on rib bones, and wiping sticky fingers on paper napkins, I hope we will finally acknowledge the crucial African American role in the creation of this unique American culinary art. 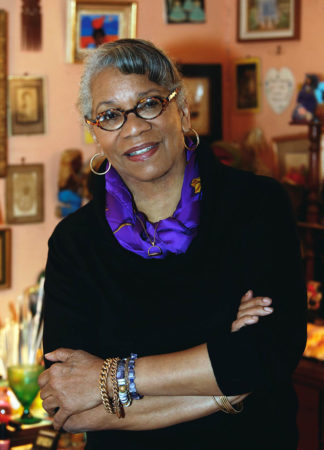 Jessica B. Harris is the author of 12 cookbooks documenting the food of the African Diaspora. She is the 2020 James Beard Lifetime Achievement Award recipient. Her latest book is Vintage Postcards from the African World (University Press of Mississippi, May 2020).