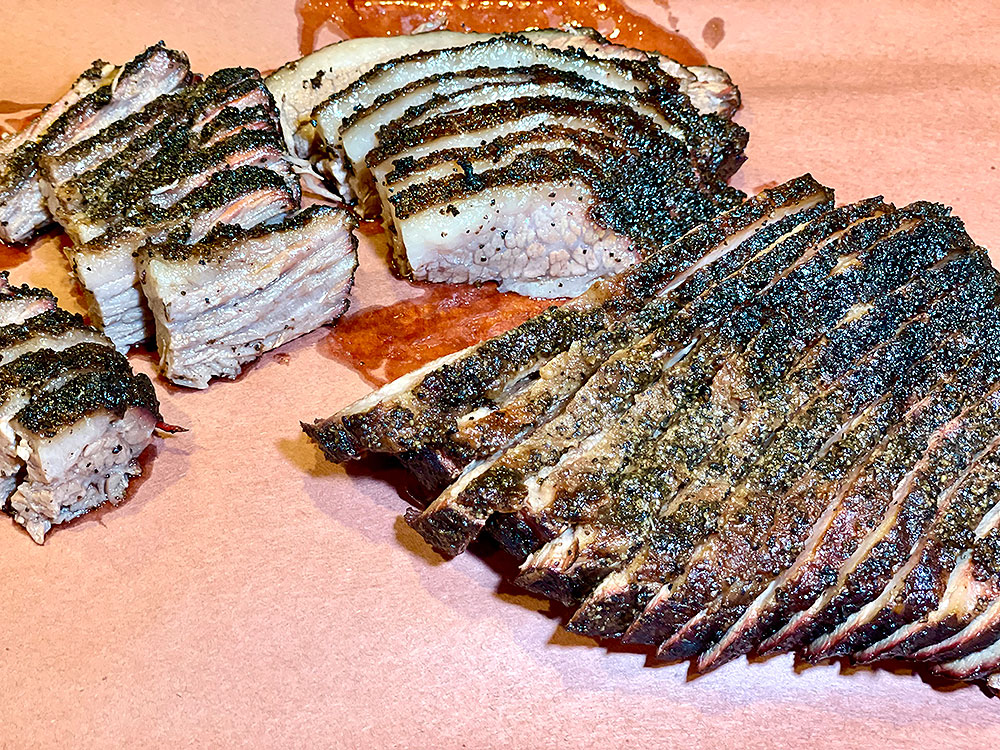 I love brisket. My favorite cooking method is low and slow since it allows a crispy bark to develop and all the intermuscular fat renders to create a super tender and tasty bite of brisket. But I don’t always want to spend the time to achieve the ultimate slice of brisket. Smoking a full packer brisket can take 10 to 12 hours or more. And that doesn’t include resting the meat.

I was curious to see if I could conquer the brisket time challenge and break up the cook into two days. The plan was to smoke a whole brisket unwrapped to 165 degrees, rest it for an hour, store it in the refrigerator overnight, and finish cooking the next day. I chose 165 degrees as the temperature for Day One since it would have made it through the stall. I normally wrap the brisket in butcher paper once it reaches 165 to preserve the bark and retain moisture.

I heated my Big Green Egg XL (BGE) to 250 degrees and placed large oak chunks inside to create wood smoke. While the BGE came up to temperature, I trimmed a 12-pound brisket. I left on more fat than usual since I was going to cook the brisket twice. I combined equal parts kosher salt and 16 mesh black pepper in a shaker to season the brisket. The shaker allows me to season the brisket evenly.

I inserted a wireless thermometer probe to monitor the brisket temperature and placed the seasoned brisket in the BGE. After an hour of smoking, I sprayed the brisket with a mixture of apple cider vinegar and Worcestershire sauce. I continued to spray the brisket every hour until the brisket reached 165 degrees. The brisket stalled at 136 degrees at the 3-hour mark. The stall lasted 45 minutes. I anticipated 6 hours for the first cook based on the size of the brisket. Total cooking time was 5 hours and 15 minutes. The brisket looked ready to eat, but I would have to wait. 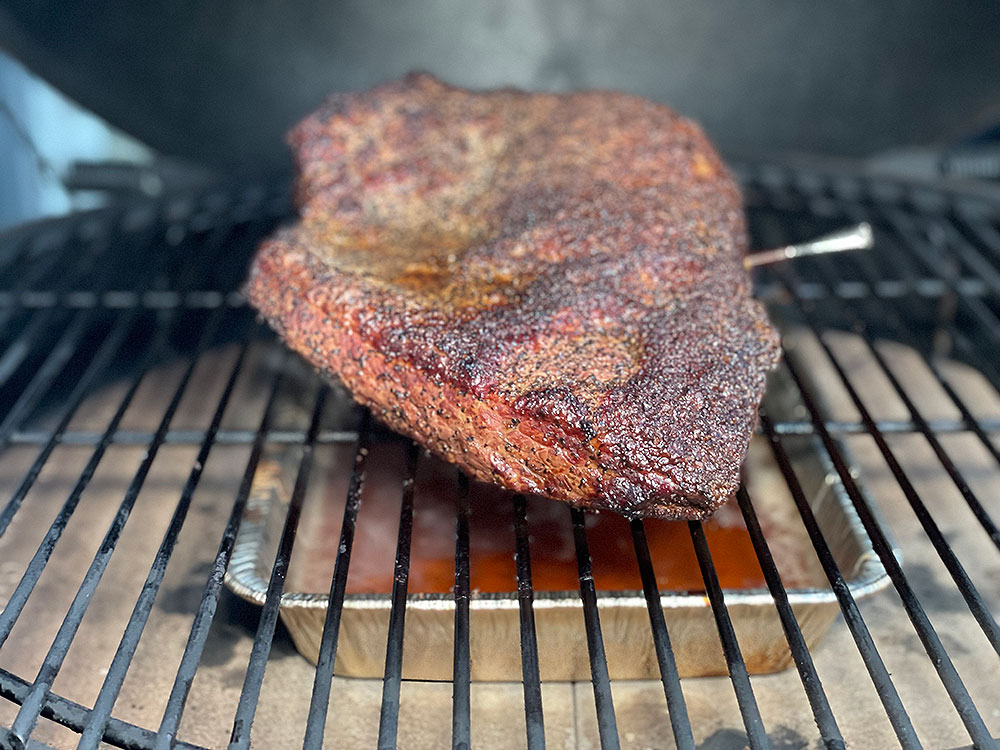 I rested the brisket on a cooling rack over a rimmed sheet pan for an hour. I then wrapped the brisket in butcher paper. I didn’t want any residual heat in the brisket to create steam in foil or plastic wrap and make the bark soggy. 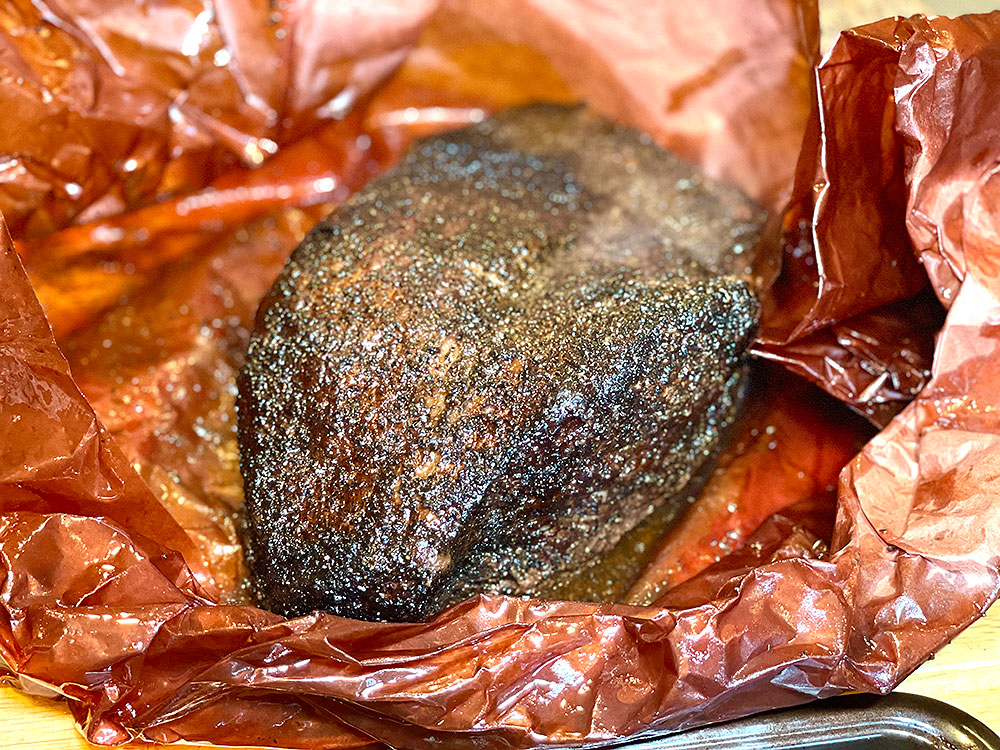 To avoid any carry-over cooking, I rested the brisket in a cooler with the top off for the first 30 minutes. I didn’t want the brisket to overcook. I then placed the top on the cooler and rested an additional hour.

It was time to unwrap the brisket and see if my experiment was a success. The fat rendered, as evidenced by the juice in the paper. The bark was crispy. The brisket passed the bend test, and when I probed the brisket with an instant-read thermometer, it felt like a bag of butter. So far, it looked and felt like a low and slow brisket. The flat sliced easily and passed the pull test. The intermuscular fat rendered from the point, and it looked super juicy. 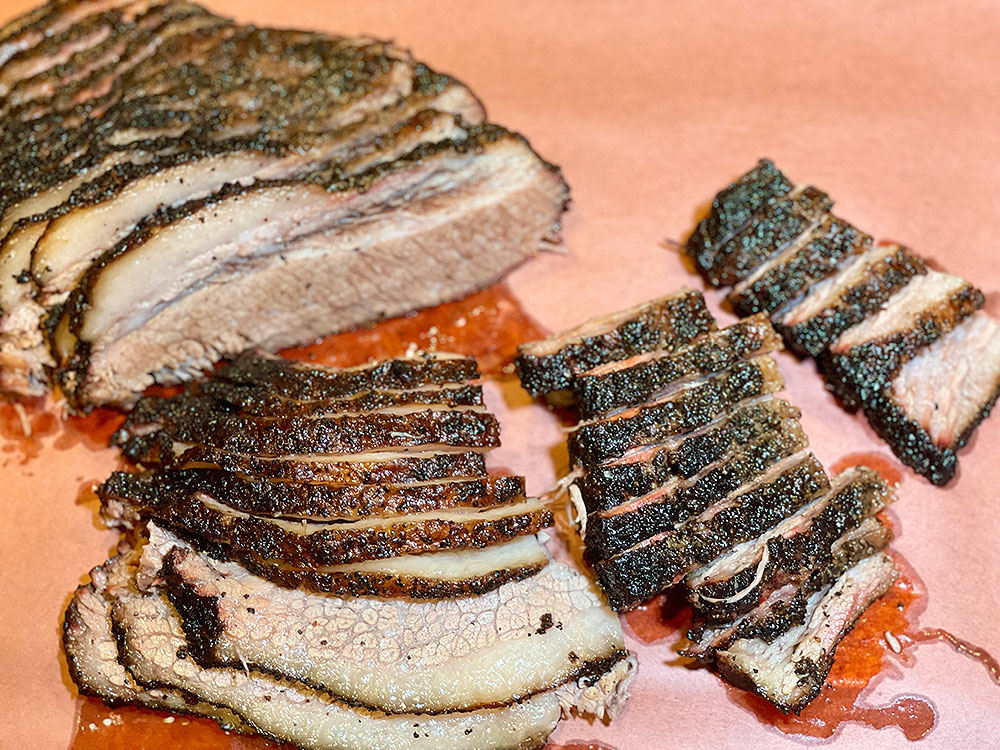 Finally, it was time to eat some brisket. The brisket flat was tender, and the salty-peppery bark was delicious. The point was succulent and felt like it melted in my mouth. My one mistake was leaving too much fat on the brisket since I was concerned the two cooks might dry out the brisket. I had to cut away the fat on some of the point slices and lost some of my bark.

Overall, I think my experiment was a success since the brisket tasted great. The total cooking and resting time for both days was just over 12 hours, so I didn’t feel it shortened the total time. One observation I made was how the first cook felt more relaxed since there wasn’t the pressure of people waiting to eat. Day Two felt stress-free as well since all I had to do was watch the digital thermometer readout and check on the temperature of the BGE.

Here are a few tips for a 2-day brisket cook. I made sure the bottom of the BGE was clear of old coals to maximize airflow. I used fresh rather than partially used charcoal due to the length of the cook. Ensure the vents in your smoker or cooker are clear, and that you have enough charcoal or wood for a long cook. Use a reliable thermometer to monitor the brisket and smoker temperatures. If you try my 2-day brisket experiment, your cooking times could be shorter or longer based on the size of your brisket. Only open the cooker or smoker when necessary since repeated looking can cause temperature fluctuations. Drastic temperature changes caused by the fire going out or spiking will lead to uneven cooking. Have fun running your own experiment. Get your family and friends together to devour your brisket when it’s finished cooking.

Laid-back cooking and mouthwatering brisket are for me. Subtle smoke flavor. I was surprised it was as juicy as it was. I thought two cooks might have dried out the brisket, but they did not. I will definitely try this again.