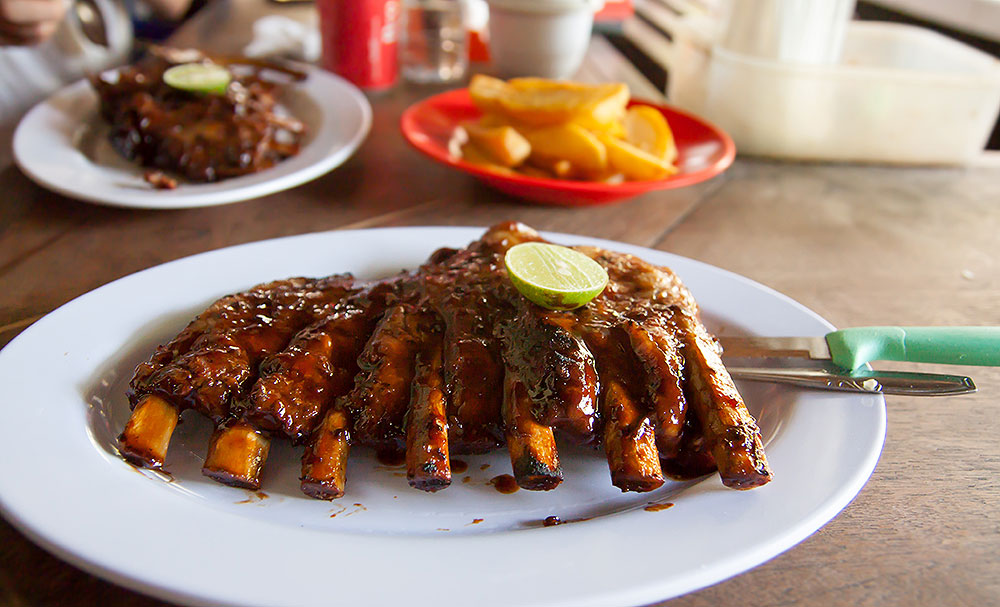 For years, I’ve preached that boiling baby backs or spareribs was an abomination, an affront to the pork gods. To anyone who innocently asked me if boiling the meat prior to grilling was the best way to achieve tender, fall-off-the-bone ribs, I always replied, “Never!”

But during a 2008 visit to a lively roadside restaurant on Bali called Naughty Nuri’s Warung, I was forced to eat crow…err…boiled ribs. And I did it enthusiastically, too. Which just goes to show, never say never; there can be an exception to every rule.

The Kansas City Barbecue Society might disagree. KCBS judges like their ribs with some chew—not fall-off-the-bone tender, aka, overcooked. And though they might revoke my inclusion in their Barbecue Hall of Fame for saying so, those boiled, then sauced and grilled ribs at Nuri’s were addictive. As I wrote incredulously in Planet Barbecue, “I just have to reach for another. And another. It just can’t be I’m actually eating boiled ribs.”

The Nuri of Naughty Nuri’s Warung is Isnuri Suryatmi. In 1994, the young Indonesian woman met and married American traveler Brian Aldinger (the “naughty” part of the equation, Nuri says). They combined her love of cooking with his gregarious personality by opening the modest pub in the artists’ enclave of Ubud the following year. Popular with expats and tourists, friends suggested the addition of a barbecue grill to the front of the restaurant. Nuri’s ribs—not to mention the establishment’s killer martinis and margaritas—quickly became an attraction. Since my visit, Naughty Nuri’s has franchised other restaurants on Bali, in Thailand, China, and Australia. 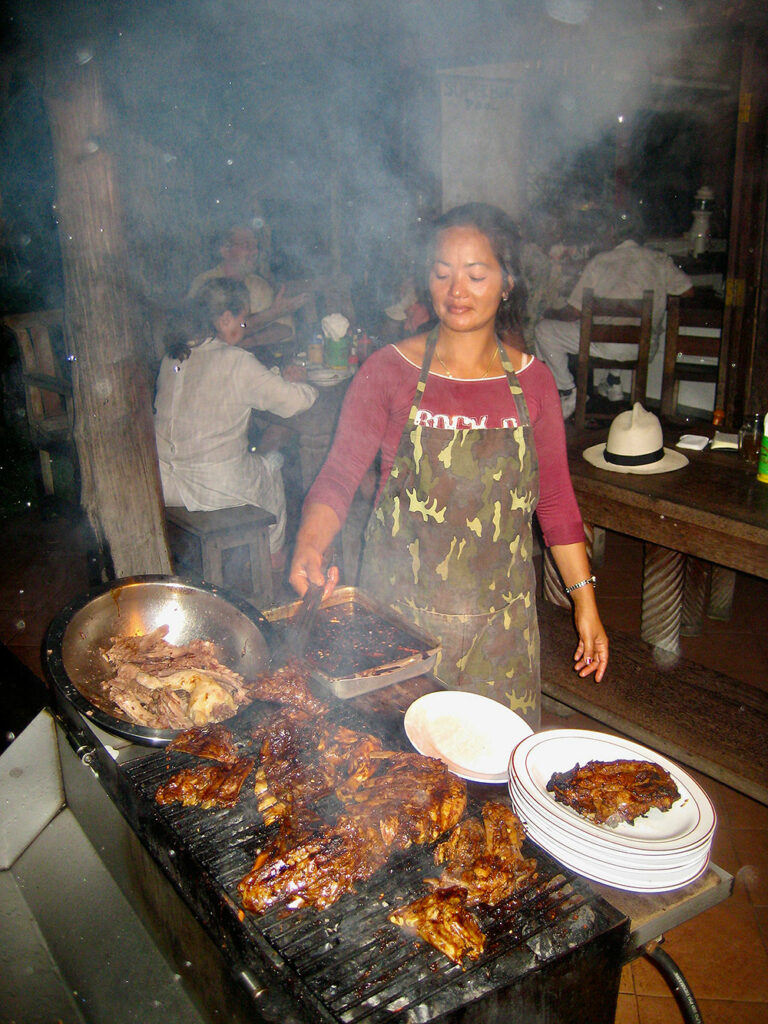 Isnuri Suryatmi grills the ribs that made her famous among the international backpack set in Bali.

But it was the original location, constructed of bamboo and wood with a corrugated tin roof and decorated with campy pig-oriented knick-knacks, that Nuri dubbed her “dream come true.” Her signature ribs, glazed with a sambal-like sauce featuring kejap manis, the sweet, syrupy soy sauce that’s a staple in Indonesia, were cooked on a soulful, battered, rickety old grill.

I was conflicted when I wrote a recipe for Planet Barbecue inspired by Nuri’s ribs. What’s a purist to do? I could’ve lied and said the ribs weren’t boiled before grilling, or I could’ve taken the moral high ground and said that Nuri boils her ribs, but you needn’t and shouldn’t—that the requisite tenderness can be achieved by indirect grilling or smoking (indeed, that’s true). So I wrote two recipes—one that eschews boiling for start-to-finish grilling, and another that includes boiling the ribs in a lemongrass-infused stock before grilling. Now, the Shakespearean dilemma is yours: To boil or not to boil, that is the question.

A note on one special (and indispensable) ingredient: The name kejap manis (sometimes spelled kecap manis) may remind you of another barbecue condiment, one you’d slather on hamburgers. It’s no coincidence. The bright red sauce Americans love and Indonesian soy sauce share a common ancestor, a sauce British mariners discovered on voyages to Malaysia in the eighteenth century. A lot of Southeast Asian barbecue, like Nuri’s ribs, acquires its sweet-salty, lacquer-like glaze from the Indonesian sweet soy sauce. Find the sauce at Asian markets, in the international food section of larger supermarkets, or online. You can also substitute equal parts regular soy sauce and molasses, though the flavor profile will be somewhat different.

I challenge you to approach this project with an open mind—maybe even make both recipes for an honest comparison. Invite a few friends over and serve icy martinis, Bintangs (Indonesian beer), or another pale lager.