UP IN SMOKE
GRILLING WITH WOOD

Dear Up In Smoke Subscriber,

When it comes to fuels for grilling, nothing beats the flavor of wood. Cooking over a wood fire brings out the primal caveman in all of us. The flickering flames are as fascinating and soothing to stare at as the delicate smoke flavor is to taste.

A wood fire is at once deeply personal (remember your first campfire?) and archetypal. It is certainly universal and timeless. “Something happens to a man when he sits before a fire,” wrote the 20th century conservationist, Sigurd F. Olson. “Around a fire, men feel that the whole world is their campsite, and all men are partners of the trail.”

Ironically, his 1956 remarks roughly coincided with big changes in outdoor cookery, at least in this country. Wood, the primordial fuel of choice since Homo erectus first walked the earth, was supplanted in suburban backyards by natural gas, propane, and stamped charcoal briquettes. In most wilderness areas, even Olson’s beloved “campfire” now depends on a canister of petroleum-based substances for its heat instead of scavenged wood.

Elsewhere on Planet Barbecue—in places as far-flung as Tuscany, Germany, and South America—wood cooking fires still burn, tended by people who take great pride in grilling the way it’s been done for a million years or more. And more and more Americans are rediscovering a method of grilling that was commonplace when our country was founded, and practiced as recently as fifty years ago.

Lately, I’ve been inundated with e-mailed questions about hardwoods. One writer was motivated by a literal windfall: Patrick N. lost a crabapple tree in a storm and wondered if he could use the wood for grilling. (Absolutely.) Another, Brandon J., asked me if I had ever tried a hard thorny wood called madrone and went so far as to send me a sample. (The smoke smelled suspiciously similar to a substance that Bill Clinton tried but didn’t inhale.)

The original wood-burning “grill” was a campfire—still the preferred “device” used throughout South America. Argentina’s asado, Brazil’s fogo de chao, and Colombia’s hogao are all variations on a theme of meats (and sometimes whole animals) impaled on sticks and roasted in front of a campfire. The heat control is as primitive as it is effective. You move the stick—and meat—closer to or further away from the fire.

One South American grillmaster has raised the art of gaucho campfire cooking to an art—Francis Mallmann, owner of the restaurants Garzon in Uruguay, of Patagonia Sur in Buenos Aires, and of Francis Mallmann 1884 in Mendoza, and author of the stunning new book, Seven Fires: Grilling the Argentine Way (Artisan, 2009). For me, this is the simply one of the best books about live fire cooking ever published, and it belongs on every serious griller’s bookshelf. (Find it in bookstores or at www.amazon.com.)

Among Mallmann’s seven fires are asado (bonfire roasting), parilla (grilling on a gridiron over embers), champa (grilling on a fire heated metal plate), etc. The coolest (actually hottest) of all is the infiernillo ( “little hell,” literally)—a sort of open outdoor oven with fires above and below the food—inspired by primitive stone ovens made by Incan Indians.

If an open fire is not an option, there are several grills on the market that can accommodate wood fires or are built specifically for them. Among them are the Grillery (www.thegrillery.com), a high-end grill equipped with a flywheel for raising or lowering the grill grate patterned on the grills popular in Argentina—you’ve probably seen it on “Primal Grill with Steven Raichlen.” Two other cool wood-burning grills are the CB940X made by Char-Broil and the stainless steel Aztec Home Grill, both equipped with a hatch in the front for adding the logs. On the set of Primal Grill, Season 2, we built a roaring fire in the larger-than-life Weber Ranch kettle grill, and when it burned down, roasted sweet potatoes directly in the embers. For the recipe, go to www.primalgrill.org.

In terms of other equipment, you’ll need long fire-resistant leather gloves or welder’s gloves; a long-handled grill hoe, garden hoe, or shovel; long-handled tongs; a steel fireplace poker; a lidded metal ash can and scoop; and of course, a fully-charged fire extinguisher.

You’ll also need a grill grate to cook on unless you plan on impaling your food on sharpened green sticks or on a telescoping fork. You can improvise a grate using, for example, an old oven rack, or use a cast iron Tuscan-style grill with legs to hold it over the fire. Position it over a bed of embers at your cook site or in your fireplace.

Here are some additional tips for grilling over wood:

Finally, here are a couple of recipes to inspire your wood-fired grilling:

A PERFECT STEAK WITH CHIMICHURRI 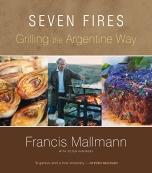 Make a wood fire about an hour before you plan to serve the meat. Shovel or rake a 2- to 3-inch bed of coals under the grill grate. (The grate should be 3 to 4 inches above the coals.) You want a medium-high temperature, a “2 Mississippi” fire. Salt the steak(s) to taste. Brush and oil the grill grate.

Place the meat on the grill. Rotate the meat after 5 minutes. Cook for 4 more minutes, then turn the steak(s) over with tongs and cook for approximately 7 more minutes, or until medium-rare, rotating after 4 minutes to achieve a handsome crosshatch of grill marks. Transfer the steak(s) to a platter and let rest for 3 minutes. Serve with chimichurri.

Bring the water to a boil in a small saucepan. Add the salt and stir until it dissolves. Remove from the heat and let cool.

Mince the garlic very fine and put in a medium bowl. Mince the parsley and oregano and add to the garlic along with the pepper flakes. Whisk in the vinegar, then the olive oil. Whisk in the salt-water mixture. Transfer to a jar with a tight-fitting lid and refrigerate for at least 1 day. Chimichurri will keep, refrigerated, for 2 to 3 weeks.

Serves: 4 to 6 as an appetizer

When Argentineans say grilled cheese, they really mean it—thick slabs of provoleta (a firm cow’s milk cheese similar to provolone) seared on the gridiron until they are melted and lightly browned. It’s mandatory fare at any Argentine steakhouse and a great recipe to do in the fireplace.

Brush each slice of cheese on both sides with the cracked black peppercorns and oregano.

Prepare a wood fire. Rake red hot embers under the gridiron and preheat it for 3 to 5 minutes. You want a hot, 2 to 3 Mississippi fire. When ready to cook, brush and oil the gridiron. Place the cheese slices on the hot grate. The cheese will be done after cooking 2 to 4 minutes per side. Take care to remove it before the cheese melts on the embers.