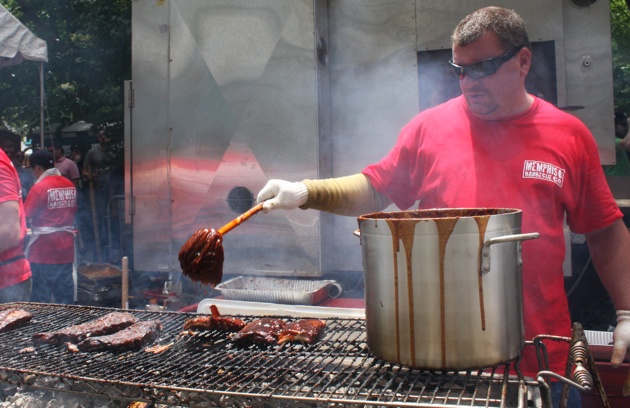 A few years ago, I was discussing barbecue with uber chef Thomas Keller of French Laundry and Per Se fame. “Where I come from,” he said, “the sauce is the barbecue.” Sorry, Chef, but in this barbecue community a lot of folks would beg to differ. For most smoke fanatics, barbecue is the long, slow, smoky cooking of meat in a pit and the sauce is a supporting player.

But supporting actors play a major roll, too. (Just watch the Oscars.) As you travel America’s barbecue trail, you’ll find some pretty formidable sauces. This lip-licking road trip across 7 states highlights 8 must-try regional barbecue sauces. And you can find more from across the U.S. in my book, Barbecue! Bible Sauces, Rubs, and Marinades.

North Carolina: Ever wonder what barbecue sauce tasted like in George Washington’s day? (Our first president was a major ‘que fanatic.) One thing’s for sure: it wouldn’t have contained ketchup. (Commercial versions of this sweet red condiment weren’t available until the late 19th century.) It probably contained hot red pepper — imported from America’s trading partners in the West Indies. And it certainly contained salt and vinegar — with just the barest trace of sweetener (or maybe none at all). Sound familiar? You’re looking at the peppery vinegar sauce that accompanies pulled pork and chopped pork sandwiches throughout North Carolina today. (In the western part of the state they add a little ketchup to the sauce.) The vinegar cuts the richness of the pork fat, while the thin, watery consistency soaks into the chopped meat without making it gummy. My version is “Pig Picker Pucker Sauce.”

South Carolina:  South Carolinians take a different approach to counterpointing the richness of barbecue pork. Inspired by early German immigrants to the area, they build their sauce on mustard, sharpened with vinegar and sweetened with molasses, honey, or brown sugar. Ketchup? It doesn’t have a chance here. Note of Yankee heresy here: I make my South Carolina mustard sauce with imported Maille mustard from Dijon, not the usual yellow ballpark-style mustard. Same pulled pork, but the sauce has a more elegant flavor.

Texas: Quick — describe a “Texas-style” barbecue sauce. Hum. I thought so. The Lone Star State has lots of great barbecue, but no one statewide style of sauce. Hell, one of the most famous barbecue restaurants in Texas — the Kreuz Market in Lockhardt — doesn’t even serve sauce. Traditional Texas barbecue sauce tends to start with meat drippings — enriched with ketchup, beef stock, and/or chili powder. Cumin and pepper often play a role, but sweeteners are kept to a minimum.

Alabama:  Visit Big Bob Gibson’s in Decatur, Alabama, and you’ll find a style of barbecue that’s sui generis: smoked chicken with white barbecue sauce. Really. The sauce — a piquant combination of mayonnaise, cider vinegar, and black pepper — was invented by local railroad man-turned-pit master, Big Bob Gibson, so the legend goes, for a customer who hated tomatoes. Since 1925, Big Bob’s has been the go-to-place for barbecue in Decatur, and today, his namesake restaurants (there are two) are run by Chris Lilly, husband of Big Bob’s great granddaughter. I know the mayo thing sounds strange, but take my word for it, it’s awesome.

Kentucky: Having just discussed “white” barbecue sauce, it seems only fair — in a gesture of culinary chiaroscuro — to mention western Kentucky’s “black” barbecue sauce. Confined mostly to Owensboro, a city of 60,000 on the banks of the Ohio River, this distinctive sauce (locally called “dip”) traditionally accompanies an equally distinctive local specialty: barbecued mutton. You read that right: Not lamb, but strong-flavored mutton. Made from Worcestershire sauce, lemon juice, melted butter, and allspice, Kentucky’s black barbecue sauce has an amazing ability to tame the gamey taste of the mutton (it makes a fabulous sauce for milder lamb, too).

Memphis, Tennessee: Memphis knows its stuff when it comes to barbecue. The dry rub rib (charcoal grilled ribs mopped with vinegar sauce, then thickly crusted with spice rub) was invented here (at the Rendezvous), and the city hosts one of the world’s biggest barbecue contests, The Memphis in May World Championship. Memphis-ites aren’t shy about wet-fixing their pork either, swabbing ribs with vinegar-and-mustard based mop sauce, or pairing tomato based barbecue sauce with smoked pork shoulder.

St. Louis, Missouri: Mention “barbecue” to someone from St. Louis, and you’ll summon forth images of luscious grilled crosscut slabs of Boston butt locally known as “pork steaks.” The sauce de rigeur in these parts is an aromatic tomato-based sauce called “Maull’s.” The mere mention of Maull’s is enough to bring anyone with St. Louis roots out of a crowd. Being a made-from-scratch kind of guy, I came up with a homemade version of Maull’s — fragrant with soy sauce, Worcestershire, garlic powder, orange zest, and Tabasco sauce. Try it on a grilled pork shoulder steak. To a St. Louisian, there’s nothing better.

Kansas City, Missouri: Last but not least, the sauce that for most Americans defines barbecue sauce. Sweet with molasses and brown sugar, edged with cider vinegar, and punctuated with—and this is key—a generous dose of liquid smoke, this popular condiment was one of the first barbecue sauces to be sold in stores. It has a flavor profile familiar to almost all Americans born after World War II — people who have eaten ribs or chicken grilled in the backyard slathered with KC Masterpiece, the BBQ sauce created by Dr. Rich Davis. The child psychiatrist turned sauce mogul had a lifelong fascination with barbecue and he tinkered with the family sauce recipe for decades until his KC Masterpiece finally went on sale in 1977. Today KC Masterpiece is owned by Clorox.

GET MY BBQ SAUCE MOPPING TOOLS:

WANT TO BUY MY BBQ SAUCES READY MADE? TRY THESE!