Belly Up to Steak 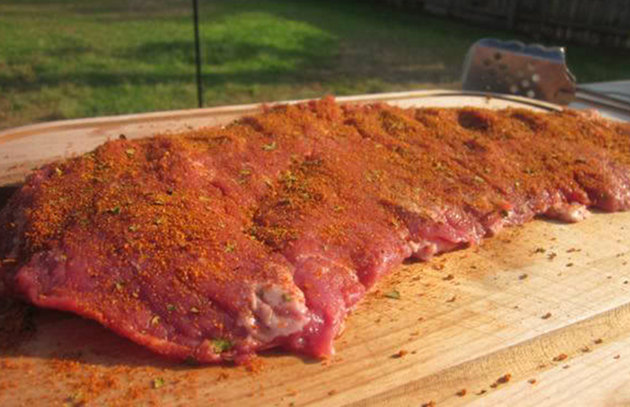 Photo by BBQ Board member Dyal_SC

The Spanish name says it all. Fajita, literally “girdle.” This robust steak from the underbelly of the steer (we call it skirt steak) has everything a carnivore hungers for: a bold flavor and no-nonsense texture you can sink your teeth into at a price you can afford. Anyone can look like a genius cooking a tender filet mignon. It takes skill—even cojones—to turn out a good skirt steak.

The skirt belongs to a family of cheap, fibrous, big-flavored steaks cut from the steer’s chest and underbelly. Related cuts include the flank steak, hanger steak, flap meat, and brisket. All come from well-exercised muscles (unlike beef tenderloin, for example, which owes its fork-tenderness to the fact that it rarely flexes), so all have well-developed muscle fibers and a correspondingly rich flavor.

But don’t those muscle fibers make for tough meat and vigorous chewing? Normally, they would. But cooks from Mexico to Thailand have contrived ingenious techniques for making them tender. Simply stated, you flash-sear the steak at a high heat on a grill or in a skillet or wok, then slice it thinly across the grain before serving. The flash-searing cooks the meat without toughening the muscle fibers, while the paper-thin slicing shortens the length of each fiber to a few millimeters—reducing its overall chewiness.

So what else do you need to keep in mind when buying skirt steak?

The whole nine yards: A whole skirt steaks measures 18 to 20 inches in length. (Most of what you buy in the supermarket has been cut into sections.) For an eye-popping presentation, buy and cook it whole. Note: the best way, the only way to cook a skirt steak that length is on the grill.

Try a little tenderness. There are two additional ways to tenderize skirt steak: chemical and mechanical.

Here are some related cuts you can substitute for skirt steak should the latter be unavailable:

Flank steak: A flat fibrous steak from the underbelly that measures 1/2- to 1-inch thick, 5 to 6 inches wide, and 10 to 14 inches long. This is one of the steaks often sold as “London Broil”—a term that refers to the cooking and slicing method rather than the anatomical source of the meat. Score, marinate, and grill or broil, then thinly slice on the diagonal across the grain.

Hanger steak: A slender, flattish, cylindrical steak that hangs from the diaphragm near the kidney (hence the name—it “hangs” rather than being attached to a bone). Richly flavorful, but limited in supply (only one per animal). Quickly grill or pan-fry over high heat (most people eat it rare), thinly sliced on the diagonal across the grain.

Flap meat: A thin flat steak cut from the bottom sirloin butt. Many people swear by it for carnitas; I find it unpleasantly tough grilled and in my opinion, it’s better for braising or stewing.

Brisket: OK, you can’t really grill this large, flat, incredibly flavorful, but intrinsically tough muscle cut from the chest of the steer like a steak. Brisket requires long slow smoking or braising to make it tender.

Obsessed with steak like I am? Get more tips and recipes to try out on the grill: