Mac and Cheese Hits the Grill 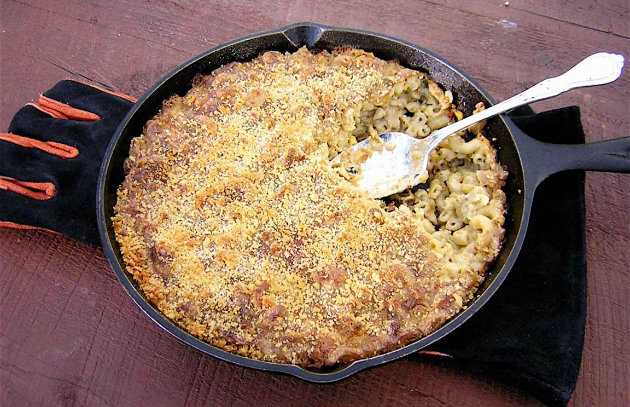 You can’t overstate the popularity of mac and cheese. Lest you’re tempted, consider this:

What you may not realize is that our national obsession for mac and cheese dates back centuries. (Remember “Yankee Doodle?”) Founding Father and first foodie Thomas Jefferson caught the mac and cheese bug during a diplomatic stint in Europe. When he returned to the U.S., among the 86 crates of food, wine, and cookware he brought back with him was America’s first pasta machine and a wheel of Parmigiano-Reggiano cheese. Jefferson later used his presidential powers to put the dish on the White House menu.

Well, irresistible as traditional mac and cheese is, it’s about to get a lot better. The secret is—you guessed it—the grill.

The Raichlen mac and cheese harnesses the power of fire and smoke at four stages in the preparation. I start by enriching my mac and cheese with onions, peppers, corn, and other aromatic vegetables. Sure, you could sauté them when you make the béchamel (white sauce), but you’ll get an even smokier flavor and caramel sweetness when you char the onions and peppers on the grill. While we’re on the subject of peppers, I use red and yellow bell peppers for color and sweetness and poblano chiles or jalapeños for heat.

The Raichlen mac and cheese gets further smoke flavor from the addition of smoked ham. Cut a few ounces into matchstick slivers and sauté them with the vegetables. For even more flavor, brown a few strips of slivered bacon in your saucepan and use bacon fat in addition to butter for making the roux.

The third way I infuse smoke and fire into mac and cheese is by using a smoked cheese like smoked cheddar or gouda, or a peppered cheese, like pepper Jack. Incidentally, I always add a little mustard (preferably Dijon or Maille) to counterpoint the richness of cheese.

The final way to take this American staple over the top is to cook the mac and cheese by indirect grilling, tossing a handful of soaked hardwood chips on the coals or in the smoker box of your gas grill.

I give you the Raichlen version. Mac and cheese will never be the same.

Get the mac and cheese recipe.