Where Did Kamado Grills Come From? 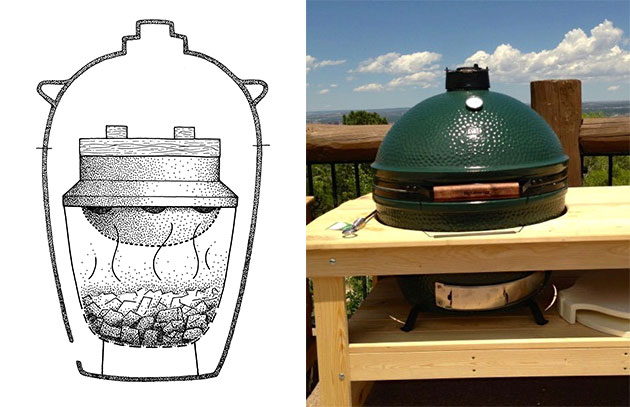 Illustration on the left by Trudy Michels, Studio Michels.

I met Jeroen Hazebroek ten years ago at a trade fair in Cologne. He impressed me by both his knowledge of kamado cookers and the lusciousness of the food he cooked on them. He’s just written a terrific new book on kamados, Hot Coals, available in his native Dutch and English. I asked Jeroen to share a blog post with us on the history of this singular and eminently versatile cooker.

The use of ceramic grills or kamados is exploding across Europe. In some European countries they are more popular than in others. In Eastern Europe they are welcomed as old friends. They are thought of as tandyr cookers, a distant cousin to the Indian tandoor grill and bread oven. This was an important clue when we were researching the history of the kamado. We Dutchmen have no discernable barbecue tradition of our own. That’s why we are more open to adopt barbecue traditions from other cultures. In the last century this was mostly recipes and techniques from our former colonies and immigrants. Recently we’ve been seeing a large movement towards American barbecue. That’s why it was fortunate that kamados made landfall in Europe through the Netherlands. The first Big Green Eggs arrived in my country in the beginning of this century, but I had to wait until 2006 to get my hands on one.

I have never been as excited about a new piece of equipment since my first few days cooking on a kamado. I finally had control. The first two dishes I made were smoked duck breast and beer-can chicken. The juiciness was incredible, a revelation. At the time I was still working as head-chef in a brewpub. I’m kind of a rare animal in my country, a grill-chef trained in the French culinary tradition. It took the next two years to figure out how far I could take this thing. Off-days were filled with smoking, baking artisanal breads and grilling.

After the try-out period I quit my job and took the show on the road. From then on I’ve been promoting kamado cooking all over Europe. After about six years on the road a publisher asked me to put my experience to paper. I found a writing partner in my friend Leo, who prepares amazing food every day on a Big Green Egg in his restaurant.

When we started writing the book we were somewhat skeptical about the origin stories of different brands. The brands mostly agreed that the kamado as a grill originated from a Chinese ceramic cooking device about 3000 years ago.

We found out that yes, there was a Chinese cooking device used during the Qin dynasty called a yan-steamer. And yes, this rice-cooker was imported to Japan during their Kofun period (250–538 A.D.). It was called a kamado in Japan. So there you have it; fast forward to 1950?

This early kamado looked nothing like the mushi-kamado on which our grills are based. Kamado means a lot of things in Japanese, but it mainly points to cooking range or hearth, something you could put your ceramic pots on. Not the other way round. Where did that shape come from? It looks a lot like a tandoor from the outside. There was this thing with Eastern Europeans confusing the kamado with their own tandyr. We suspected there was a link somewhere.

We found out that the first mushi-kamados were designed in the early 1900s as the definitive rice-cooker. This was the end of the Meiji period (1868–1912). Japan was looking out to the rest of the world and taking in technologies from other cultures like India.

The challenge with cooking rice on a hearth is that you have to lower the temperature halfway through, but not too much. You get it to a boil and then simmer to the end. The first mushi-kamados were made in a part of Japan where shishirin were made, the little round ceramic grills that we call hibachis.

The great Japanese innovation was that they managed to integrate different cookers. You get your cast-iron rice-pot to a boil on top of a hibachi. This hibachi is inside of a tandoor-shaped oven. To extinguish the fire on which your rice is boiling, you put a damper on both the chimney and the air intake. The kamado slowly returns the heat stored in the clay and the rice simmers to perfection. Some traditional sushi restaurants still use it, but the first electrical rice-cookers in the fifties killed the sale of mushi-kamados as a cooker in Japan.

It took an American soldier to see its potential as a grill. The US stationed an occupying force in Japan just after the Second World War. A lot of G.I.s took back souvenirs, pieces of Japanese culture that are now everyday items, like kimonos and hibachis. The first Americans who sold Japanese kamados in the US made some adjustments. They installed a grid and a hinge. But the most important adaptation was that they made the damper on top and the air inlet manageable. In this way you could control the heat on a sliding scale.

So there you have it. The advent of kamado grills.

In the seventies a man called Ed Fisher wanted to produce lighter kamados that were less prone to cracking. He made them green; probably because the Japanese brands he initially sold were either green, black or orange. But that’s another story. Enter for a chance to win a Big Green Egg.

Are you watching Steven Raichlen’s Project Smoke yet?