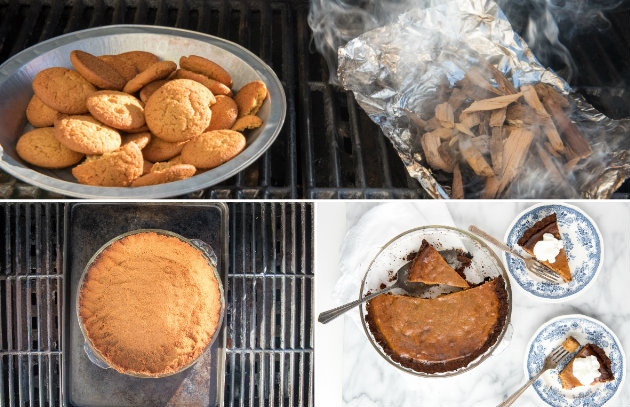 If barbecue is a religion, most of the time I find myself preaching to the choir. But last year at Barbecue University I had the opportunity to make a convert. Her name was Toni Dash and she came to BBQ U with terrific writing skills (from her blog, BoulderLocavore.com) but little experience grilling. Well, to judge from this innovative dessert—grilled pumpkin pie with a smoked gingersnap crust—she caught the holy fire. She’s also a mind reader, because I was thinking: why not grill the pumpkin too? I’d do it caveman-style. That is, take a whole pumpkin and place it directly on the embers. Roast it until charred black on all sides and soft enough to pierce easily with a metal skewer, turning with tongs so it cooks evenly. This will take about 15 minutes. Transfer it to a sheet pan to cool, then scrape away the blackened skin and seeds. Puree the flesh in a blender, then strain to remove any stringy pieces. Awesome just got better.

And now, that grilled and smoked pumpkin pie.

I had the good fortune to meet Steven Raichlen this past summer when I attended his Barbecue University in Colorado Springs, Colorado. I attended BBQ U with the goal of upping my grilling game both for personal and professional reasons. I was at BBQ U about 2.4 nanoseconds before I realized I actually had NO grilling game; I simply knew how to grill hot dogs and sausages without burning them.

In the following three days the world of grilling and smoking ripped wide open for me. There was almost more information than I could take in, and suffice it to say I walked away with a vast array of techniques and knowledge to jump into my own experimentation. Following BBQU I grilled daily during the summer and began to experiment with smoking food (being from Colorado where marijuana is legal, a clarifying noun after the word “smoking” is key). While other girls I know are coveting the latest fashions, I’m pining over a new barrel smoker and wondering how many grilling devices would be considered “too many” to own.

I tend to like culinary roads less traveled, so love thinking up unexpected recipes for the grill. Being fall, with busy cooking holidays looming large, I wanted to share a way I’ve been using the grill to keep my oven free for other purposes: Grilled Pumpkin Pie with Hickory-Smoked Ginger Snap Crust. All of the cooking happens on the grill itself and the recipe steps are simple. The initial step of smoking the ginger snaps gives an additional depth of flavor to the pie, setting it apart as a unique dessert. I used a very easy method of dry wood chips on heavy duty foil for this short smoking. This leaves the grill ready to transition to cooking the pie crust and then the pie, without the difficulty of removing hot wood chips from charcoal or a smoking box.

I will admit as I was creating the recipe I did hear Steven in my head asking, “why don’t you grill that pumpkin?!” It did cross my mind; however, in the spirit of keeping things simple I used prepared pumpkin puree. Sugar pumpkin slices could be lightly oiled, sprinkled with fall spices and grilled until soft enough to process through a food processor for the pumpkin puree as well.

Get the recipe for Grilled Pumpkin Pie with Hickory-Smoked Ginger Snap Crust.