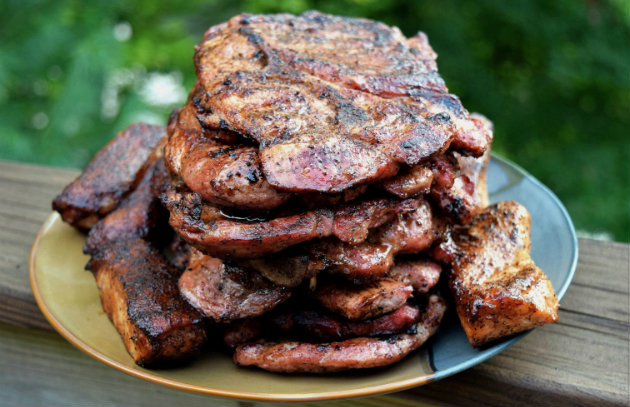 Project Smoke fire wrangler Rob Baas needs no introduction. Not to anyone who has watched him fire up our grills on the set of Project Smoke. Not to anyone who has read his excellent blog posts on BarbecueBible.com or enjoyed his mouthwatering photos on Instagram and Facebook. What you may not know about Rob is that he’s a native of Kentucky. We asked him to write about the best Kentucky barbecue you’ve never heard of. Get ready to get hungry. And fire up your grills!

There is a tiny town called Tompkinsville (population 2,400) in the south central part of Kentucky that maybe has more BBQ joints per capita than any other town in the Commonwealth, and they all serve a barbecue specialty that is unique to this part of the country. I discovered it while working on an online BBQ guide for this part of the country. I credit Dr. Wes Berry, a native son and unrepentant barbecue addict from Western Kentucky University, for my epiphany. He is the author of The Kentucky Barbecue Book, which documents regional barbecue styles in the Bluegrass State as well as the best barbecue joints and festivals. I learned a lot from him and he’s a good buddy now. (Steven reviewed his book on BarbecueBible.com and I wrote a review for our local paper.)

So, what do they do that’s special in Monroe County, specifically, T-ville? They cook thinly cut, explosively-flavored pork shoulder steaks directly over hot hickory coals. They build a fire in a separate area, then shovel the coals under a grill grate on the pit. They flip the steaks often and mop often with a magical spicy vinegar sauce. If you’re timid, order the steak sprinkled (not dipped) with sauce; bolder palates like the steaks dipped in the warm sauce before serving; masochistic heat-seekers ask that their steaks be double-dipped. Most pork steaks come with slaw because it helps tame the heat from the fiery dip. Just north of the Tennessee border and serviced by rural roads, Tompkinsville isn’t easy to get to. But a few locals have brought the concept of Monroe County-style barbecue to neighboring counties. For example, if you’re traveling I-65 between Nashville and Louisville, your best bet is Smokey Pig Bar-B-Q off Exit 28 in Bowling Green.

If you want to try the concept at home, buy thin (less than 1/2 inch) bone-in pork steaks; you may have to ask your butcher to cut some for you. The hardest part for me has been figuring out the spicy dip because nobody will share a recipe. (I’m good friends with the folks who make my favorite version and I’ll be dead before they’ll share it with me.)

But I started with the recipe in Wes’s book and I finally got it right. So give this a go if you’re looking for something new to barbecue. (Because they cook quickly, these steaks are perfect for a wintertime grill session.) I cook the steaks over hardwood lump charcoal with some hickory chunks mixed in. Season the pork with salt and pepper, flip often, mop often, maybe even overcook the pork a bit, and keep some dip warm for serving. The dip is great with chicken or ribs, too!

Get the recipe for Rob’s Monroe County-Style Mop and Dip.

Get a recipe for pork steaks.