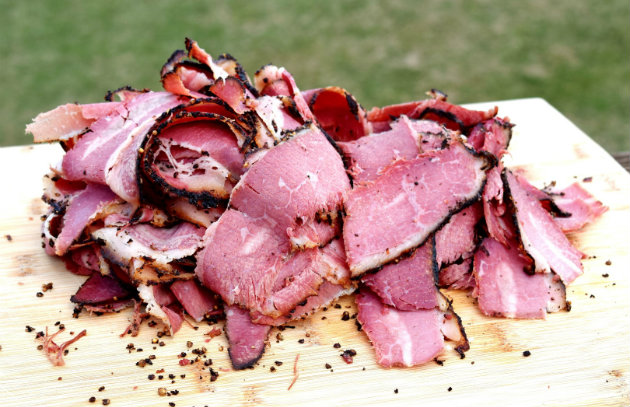 In a few weeks’ time, a big rosy pork shoulder ham will have pride of place on millions of American tables. Its very color is a harbinger of spring, the result of a preservation process using curing salt. (Without this special salt, the meat would not be pink; it would be the same shade of tan as a cooked pork chop.)

The details have been lost to history. But thousands of years ago—as early as 3000 B.C.—mankind discovered salt not only delayed the spoilage of precious proteins like meat and fish, but when laced with small amounts of sodium nitrate, sodium nitrite, or potassium nitrate (saltpeter) there were even more benefits: an appealing color, improved taste, and better texture. Most importantly, these potent compounds could destroy dangerous food-borne pathogens like Clostridium botulinum, aka, botulism.

First identified in Germany in the 1820s after a deadly outbreak, the botulinum toxin has been dubbed “the most poisonous of poisons” by scientists. It was named after the Latin word for sausage, botulus, because the victims being studied died after eating improperly cured sausage, sausage that did not contain bacteria-fighting nitrates or nitrites.

While curing salts might seem like an obscure subject, a growing number of home pit masters—inspired, we hope, by Steven’s book Project Smoke and TV show by the same name—have started curing and smoking their own bacon, pastrami, sausage, jerky, etc. It’s critically important to you and the people you feed that they be used correctly.

At this point, you may be thinking, “Wait…didn’t I hear that nitrates—or is it nitrites—cause cancer?”

It was widely reported in the 1970s that nitrates/nitrites were carcinogenic. That conclusion, based on a now discredited study, was later refuted by the National Toxicology Program, an agency within the U.S. Department of Health and Human Services. Nitrates/nitrites are not only safe when used at approved levels, but integral to human health. Research conducted during the past 30 years indicates that nitrites may prevent cardiovascular disease, sickle cell anemia, and strokes as well as aid in wound repair.

The maximum amount of nitrites allowed in cured meats by the USDA and the FDA is 156 parts per million (ppm), and is usually lower than that. Some vegetables contain many times more nitrates/nitrites than cured meats. Not convinced? It’s been reported that 1 serving of arugula plus 2 servings of butter lettuce plus 4 servings of beets contain nitrites equivalent to 467 hot dogs!

And those “nitrate free” or “no nitrates added” hot dogs or other meats you’ve been paying a premium for? They’re a “huge hoax,” says Jonny Hunter, the founder of Wisconsin-based Underground Meats, in The Atlantic. They contain nitrate- and nitrite-rich celery powder or juice.

But like most substances, nitrates and nitrites can be toxic, even lethal when not used at recommended levels. That’s why most curing salts are tinted pink with red dye No. 3—to make sure you don’t confuse them with ordinary table salt. (Do not confuse them with Himalayan pink salt, either. The two are not interchangeable.)

Below are descriptions of the most common curing salts and how to use them. Confusingly, these compounds (mixed with good ol’ sodium chloride) are sold under a variety of names to commercial and amateur smokers of meat alike. You can buy most of them from our online store. Prague powder is a generically named compound (the aforementioned patent expired decades ago) that contains 6.25 percent sodium nitrite and 92 percent sodium chloride as well as an anti-caking agent and a very small amount of FD&C Red No. 3 to dye it cotton candy pink and distinguish it from other salts in your kitchen. A mere 4 ounces will cure 100 pounds of meat (use 1 level teaspoon for every 5 pounds of meat). As some of its alternate names imply, it works quickly. Meats like sausage can be smoked or cooked right away. If brining, use 1 tablespoon per gallon of water and allow enough time for the salts to penetrate the food, usually 24 hours. Follow the manufacturer’s directions carefully. Again, nitrates/nitrites can be toxic when not used in the recommended proportions. Use for wet-cured hams, jerky, salami, pastrami, sausage, cured fish, corned beef, and bacon. Getting technical—how to use curing salts for curing and smoking:

What are YOUR favorite meats and seafoods to cure?