In Time for Father’s Day: 5 Great Recipes for Grilled Steak 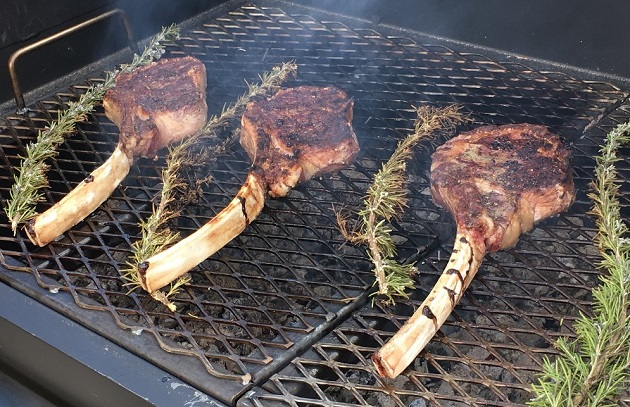 George Stephens, Sr. fabricated the first prototype of his iconic Weber kettle grill in 1952. My family didn’t get the memo until the 1970s, meaning that all the steaks that ended up on our table were cooked on a grill with a lidless shallow fire pan. I recall the grill grate could be raised or lowered via a crank-operated center stem over the coals, but only by a couple of inches. Consequently, everything was direct grilled. And my father did steaks one way and one way only—hot, fast, and well done, seasoned with table salt and pepper. (You’d have no more luck asking him to cook a medium-rare steak than asking the staff at Father’s Office—a popular gastropub in Santa Monica—to add ketchup to your burger.)

But there’s a whole world of steaks out there; just Google “steak” and “Steven Raichlen” and you’ll see what I mean. Here, just in time for your family’s Father’s Day celebration, are five of our favorite internationally influenced steaks featuring complex layers of flavor and multiple techniques. 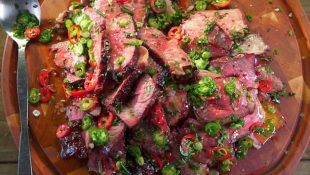 Cherry-Smoked Strip Steak with “Board Sauce”
Adapted from Steven’s latest book, Barbecue Sauces, Rubs, and Marinades (you’ll also see these magnificent steaks on Season 3 of Project Smoke), here’s an ingenious idea for saucing meat. Invented by the pit master-owner of New York City’s Daisy May, Adam Perry Lang combines fresh chopped herbs, scallions, chiles, extra virgin olive oil, and salt and pepper with the rich juices from a just-grilled steak right on the cutting board. This recipe will introduce you to the newly popular reverse-sear technique where the meat—preferably a thick steak or roast—is smoked to a threshold temperature and then seared over a hot fire. If you or Dad like your steaks cooked to sanguine perfection, you’ll want to add this method to your repertoire. 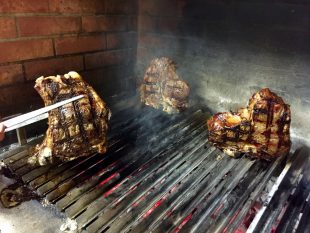 Bistecca alla Fiorentina
Florentines like their steaks rare, and this bible-thick beef Porterhouse spends just enough time over a charcoal or wood fire—often in the fireplace—to sear the exterior dark and crusty while leaving the center rare. (This is the opposite of the reverse-sear method referenced above.) In a perfect world, you’d start with dry-aged Chianina, a massive breed of white cattle native to Tuscany, seasoned profligately with coarse salt and pepper, and drizzled with best-quality Tuscan extra virgin olive oil. The meat juices and oil comingle to form the brawny sauce. Lemon wedges optional. For killer grill marks or a sear to make Maillard proud, preheat our cast iron Best of Barbecue Tuscan Grill or Grilling Plancha on the rungs of your grill. 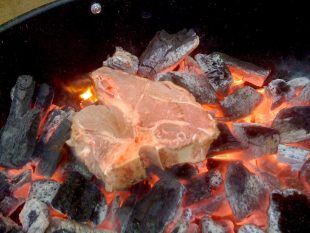 “Caveman” T-Bone Steak with Hellfire Hot Sauce
This is it—the primal steak—the ultimate flavor junkie’s T-bone. It’s been a recurring favorite at Barbecue University at the Broadmoor in Colorado Springs, and will be back this year by popular demand. You grill it not on the grate, but directly on the embers. This produces a crusty surface char and a smoke flavor you can’t replicate on a conventional grill grate. Add a scorching pan sauce of jalapeños, cilantro, and garlic, and you’ve got T-bones with off-the-chart wow power. 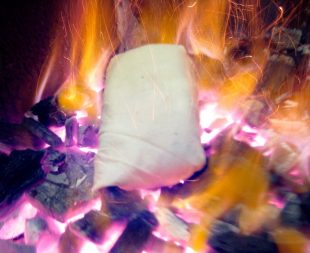 Lomo al Trapo (Salt-Crusted Beef Tenderloin Grilled in Cloth)
This is one of the most outrageous steaks in our stable: a hunk of center-cut beef tenderloin is crusted in heat-transmitting salt and dried oregano, then wrapped in a sacrificial cotton dish cloth before being thrown directly in the embers for 19 minutes. Steven discovered it in Colombia. The cloth chars, revealing a cast-like covering of herb-inflected salt that needs a solid whack or two to remove. The encased meat is uniformly rare from edge to edge, rebuking the “bulls-eye” pattern traditional cooking methods produce. We wouldn’t say no to a dab of Three Hots Horseradish Sauce. 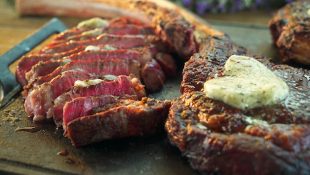 Wood-Grilled Tomahawks with Blue Cheese Butter
Tomahawk beef steaks—rib-eyes attached to a long, usually frenched rib bone—often weigh in at 40 ounces or more and are more than two inches thick. Though they’re sometimes known as cowboy steaks, their resemblance to a tomahawk is unmistakable. Rubbed with minced garlic and rosemary, this princely hunk o’ proteinaceous pleasure is seared on both sides over a hot wood fire (enhanced with fresh sprigs of rosemary) before being moved to a cooler part of the grill to finish cooking. This combination method of direct and indirect grilling ensures that the outside will be crusty and flavorful and the inside will be cooked to Dad’s preferred doneness—hopefully rare to medium-rare. Finally, the steak is crowned with a salty-savory disk of blue cheese butter.