By Nancy Loseke with Glenn Tiede 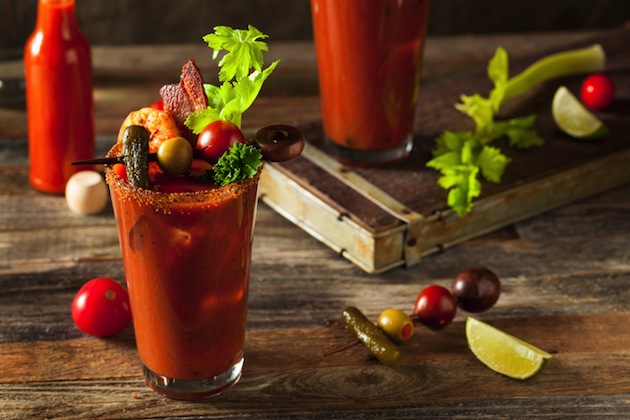 Many of you know Glenn Tiede, an active poster on Steven’s Facebook fan page,“Steven Raichlen’s Project Smoke & Primal Grill,” and an avid barbecuer from Central Illinois. But you may not know that Glenn is well known locally and beyond for his hand-crafted Bloody Marys. He makes them nearly every weekend and teases the rest of us with photographs of the cocktails. When Steven and I decided to put Bloody Marys on the editorial calendar, Glenn was our go-to guy. Thanks, Glenn!

January 1 is officially National Bloody Mary Day. The timing couldn’t be better. Even if you don’t require a “hair of the dog” hangover cure after New Year’s Eve revelries, you now have an unimpeachable excuse to quaff one of America’s most beloved brunch cocktails.

Though the origins of this restorative beverage aren’t clear, food historians often credit a professional bartender, Fernand Petiot, with combining equal parts of vodka and tomato juice in the 1920s when he worked at Harry’s New York Bar in Paris. He later claimed he spent years tweaking the recipe until it resembled the classic drink we’ve come to know and love. The cocktail was said to be a favorite of Ernest Hemingway who was trying to hide his matitudinal alcohol consumption from his wife.

Today, the Bloody Mary and its many variations—including Steven’s incredible smoked version—are more popular than ever. Use either his recipe or the one Glenn generously shared with us as a starting point, then put your own creative riffs on it.

From all of us here at barbecuebible.com, have a bloody good year in 2018!

The Base: There are lots of decent pre-made Bloody Mary mixes out there. Even some great ones. But you’ll have to kiss a lot of frogs to find them. And spend a fair amount of money in the process. Some are too thick, too thin, too salty, too sweet, too tangy, too spicy, etc. But our friend Warren Bobrow, mixologist extraordinaire and author of The Craft Cocktail Compendium, recommends Ubon’s PitMasters Hot and Spicy Bloody Mary Mix to the barbecue-obsessed. A new favorite is McClure’s, which contains a fair amount of tangy pickle brine, pickles being McClure’s core business.

But the real purists start with tomato juice, either homemade or a good supermarket brand such as Sacramento. Some cut it with Clamato (for a “Bloody Caesar”), Beefamato, or V-8.

Steven and I like to smoke the base with a handheld smoker (see a description of the technique here). Alternatively, you can smoke the juice in a disposable aluminum pan on your outdoor smoker or grill using wood chips or hardwood chunks. Chill thoroughly before using. Glenn never smokes the mix, preferring to add that flavor to the cocktail with garnishes. (See below.)

While Bloody Marys are customarily red, Glenn says he once made a beautiful yellow cocktail by juicing fresh Lemon Boy tomatoes from his garden. A green version can be concocted from pureed tomatillos and coriander.

Moisten the rim of the glass, preferably a highball glass, with a grilled lemon or lime half, then dip it in the salt mixture. (Note: Salt won’t stick to plastic or disposable glasses.) To make your own smoked salt, spread kosher or sea salt in a pie plate and place it on the grill grate while you’re smoking pork shoulder, brisket, or another food that takes hours. The flavor will be more subtle than what’s sold commercially.

The Spirits: Bloody Marys are usually made with vodka, although gin has its partisans. You can also use tequila or smoky-tasting mezcal for what’s called a “Bloody Maria,” or bourbon, pisco, or aquavit. You can even smoke the alcohol—not necessarily the top shelf stuff as it will be mixed with other flavors. (For vodka, Glenn recommends widely available Tito’s, Gordon’s, or Smirnoff’s.)

If desired, infuse the spirits with fresh or dried chiles, citrus, whole spices or herbs, grilled bacon, etc. Submerge the flavorings and let the mixture sit at room temperature for 3 to 7 days. Decant it when you’re happy with the strength.

The Ice: On this continent, Bloody Marys are often served over ice. But professional bartenders recommend neither shaking nor stirring the drink. Instead, they “roll” it, which is to say, they combine the well-chilled ingredients with ice cubes, then pour the drink 6 to 8 times between two cocktail shakers before straining it into a serving glass. This method, they say, ensures the proper dilution. (Be careful not to disturb the salt on the rim when pouring.)

Smoke the ice? Why not? Steven has been known to smoke water and then freeze it into smoked ice cubes. (For the clearest ice, bring distilled water to a boil twice on the stovetop or on your grill’s side burner before smoking and freezing it.)

The Garnishes: This is where it gets fun, folks. The classic Bloody usually features an obligatory rib of celery, giving the drink a pop of color and a convenient and edible swizzle stick.

But some bars are known for outrageous garnishes, such as Milwaukee’s Sobelman’s, perhaps the winner of the Bloody Mary arms race: In addition to a whole fried chicken, their pitcher-size “Bloody Beast” is garnished with cheeseburger sliders, bacon-wrapped jalapeno cheese balls, smoked sausage, shrimp, pickled asparagus, olives, and much more. It also comes with a beer chaser. (The price is $50.) Like Steven and me, Glenn likes to set up a Bloody Mary bar for guests with an array of garnishes and skewers, including

Inspiration for Glenn’s signature Bloody Marys came from a local bar and restaurant owned by friends. Here’s how he builds the drinks:

Rim a tall glass as described above with Demitri’s Rim Shot or your favorite rimmer (optional). Fill the glass with ice. Add a generous squeeze of fresh lime juice, 1 teaspoon of Worcestershire sauce, several dashes of Frank’s Original RedHot, and 1 teaspoon of prepared horseradish. Fill the glass halfway (or nearly so) with vodka. Top it off with equal parts of tomato juice and Clamato. Stir. Taste for seasoning, adding more lime juice, hot sauce, or horseradish. Garnish as desired. Makes one drink.