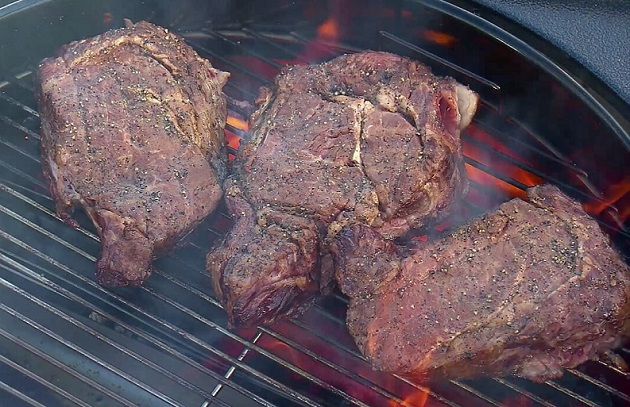 If your idea of a perfect steak is crusty on the outside, grilled to a uniform rare to medium-rare, masterfully seasoned with a hint of wood smoke, and tantalizingly juicy when you cut into it, listen up. There’s a new grilling method you’ve probably never heard of. The secret? A cold grate.

I was first introduced to this singular technique by David Parrish, the founder of Adrenaline Barbecue Company (aka, ABC) of Concord, North Carolina. David, who proves you don’t have to have a degree in rocket science to cook the perfect steak—he’s close, though, with a B.S. in physics!—just a willingness to learn new tricks and a Weber kettle grill or its equivalent. (In the interest of full disclosure, David’s company is one of the sponsors of my TV show, Project Fire, on American Public Television.)

Cold grate grilling is a two-step process that begins with what is called the reverse-sear method, where meat is slowly warmed and/or smoked to an internal temperature of 110 to 115 degrees, then seared over a hot fire. But instead of being branded on a screaming hot grill grate, the grate itself is rotated at one-minute intervals and the meat is repositioned. That way, the meat always rests on relatively cool grill rungs during its sizzling trip over live coals. If you’ve deduced that cold grate grilling sacrifices the sharp grill marks I’ve been championing for years, you are right. However, the entire surface of the meat—not just the crosshatch pattern—is uniformly caramelized for maximum flavor. So while I still believe food with grill marks is Instagram-worthy, I’m willing to concede flame-caramelized food makes a lot of sense to your palate.

For the filming of Episode 101, “Steak and Beyond,” we used two innovative products from ABC—both developed by David.

The first is called a Slow ’N Sear®, a stainless steel charcoal corral with a built in water reservoir that effectively turns a standard kettle grill into a smoker. Designed to fit snugly against the wall of the firebox, the Slow ’N Sear® can coax a wide range of temperatures from common charcoal briquettes; it can smoke low and slow or cook indirectly for hours, or as the name suggests, sear at temperatures in excess of 1000 degrees. Steakhouse worthy temperatures, in other words.

The second is an EasySpin™ grill grate. The grill handles are welded to the top of the grate, making it easier to rotate when cold grate grilling. (You can still practice cold grate grilling with a standard grate, but will have to lift the grate when the welds encounter the support tabs.)

David’s favorite steaks are rib-eyes, so I opted to demo the cold grate grilling method by preparing Dry-Brined Rib-Eyes with Anchovy Cream for the camera. (To watch the video, click here.) Below is a summary of the seven steps to take toward steak nirvana:

1. Prep the steaks: Buy the best meat you can find, preferably grass-fed, organic Prime or Choice with generous marbling. Each steak should be at least 1 1/2 inches thick. (Our source for rib-eyes for the show was Creekstone Farms.) Season the steaks on both sides with kosher salt, then place on a wire rack over a rimmed baking sheet. Refrigerate for 1 hour, or up to overnight.

2. Using paper towels, blot any accumulated moisture off the steaks; a dry surface will promote browning and is key to achieving a good crust.

3. Set up your kettle grill for smoking by placing a chimney of natural lump charcoal or charcoal briquettes in the Slow ’N Sear®, a charcoal basket, or in a shallow pile on the lower grate near the wall of the firebox. (David prefers briquettes over natural lump charcoal as they burn more predictably.) If using the Slow ’N Sear®, fill the water reservoir with hot water. Adjust the vents to maintain a grill temperature of 225 to 250 degrees. Place the grill grate on the grill. 4. Arrange the steaks on the cool side of the grill. Ideally, you’ll be using a digital remote thermometer to monitor the temperature of the grill and the steaks. Add 2 or 3 wood chunks to the coals through the hinged charcoal access door to generate smoke. Close the lid and smoke the steaks until the internal temperature on the remote or an instant-read thermometer reads 110, about 1 hour. After 40 minutes, light another chimney of charcoal in preparation for searing. Make the Anchovy Cream, if desired, and keep warm.

5. Remove the steaks and the grill grate from the grill and set aside. Add the newly lit charcoal to the pile and allow the fire to develop its full heat potential. In the meantime, brush the steaks on both sides with extra virgin olive oil and season generously with freshly and coarsely ground black pepper.

6. Return the grill grate to the grill and arrange the steaks on the cool side of the grill. Using tongs, move the steaks directly over the coals. Allow them to sear for 1 minute. (If you get flare-ups, return them to the cool “safety zone” until the flames die down.) You’ll be working without the grill lid. Wearing grill gloves, rotate the grill grate until the steaks are once again in the cool zone. Quickly flip the steaks and arrange them over the hot coals once again. (The objective is to ensure the steaks are always on a relatively cold grill grate, but seared over a hot fire.) Sear for another minute. Repeat the sequence once more for a total of 4 minutes—2 minutes per side—or until the internal temperature of the steak is 125 to 135 degrees for rare to medium-rare. (Note: If the steaks are exceptionally thick—over 1 1/2 inches—it’s possible a 4-minute sear will be insufficient to bring the internal temperature of the meat to your desired doneness. In that case, move the steaks to the cool side of the grill, replace the grill lid, and allow the steaks to cook indirectly.)

7. Transfer the steaks to a warmed platter or plates. Serve, if desired, with the Anchovy Cream. And dig in!