Cooking An A5 Wagyu Brisket from Kagoshima Farms in Japan 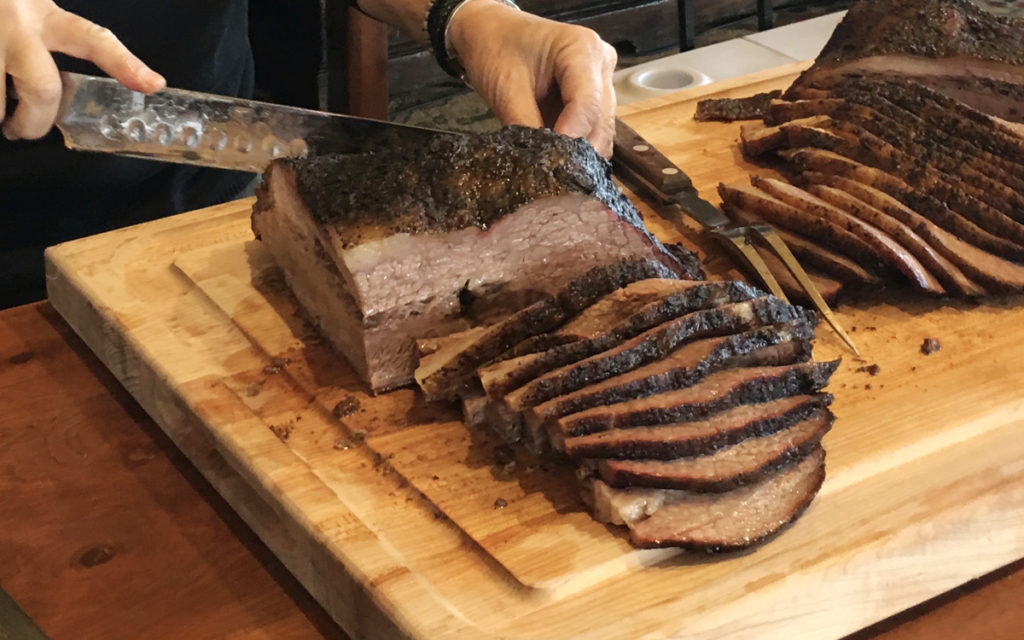 Last May I had an extraordinary experience. I had the opportunity to cook an A5 wagyu brisket from Kagoshima Farms in Japan. Wagyu is the breed of steer that produces Kobe and the other extraordinarily well marbled beefs from Japan, and A5 is the highest rating the Japanese bestow on their beef. Together, they deliver some of the most extraordinary beef on the planet. I’ve been ordering meat from Crowd Cow for several years now, and I’ve always been delighted by what they deliver.

But I’ve never seen anything quite like this A5 brisket. First, I was stunned by its size. Most packer briskets weight 12 to 16 pounds. This bad boy tipped the scales at 36 pounds! (It included some muscles that are removed from the brisket in American meat cutting.) Then there was the marbling. Imagine laying fine white lace over a red tablecloth. That’s how incredibly interspersed the meat was with buttery fat. 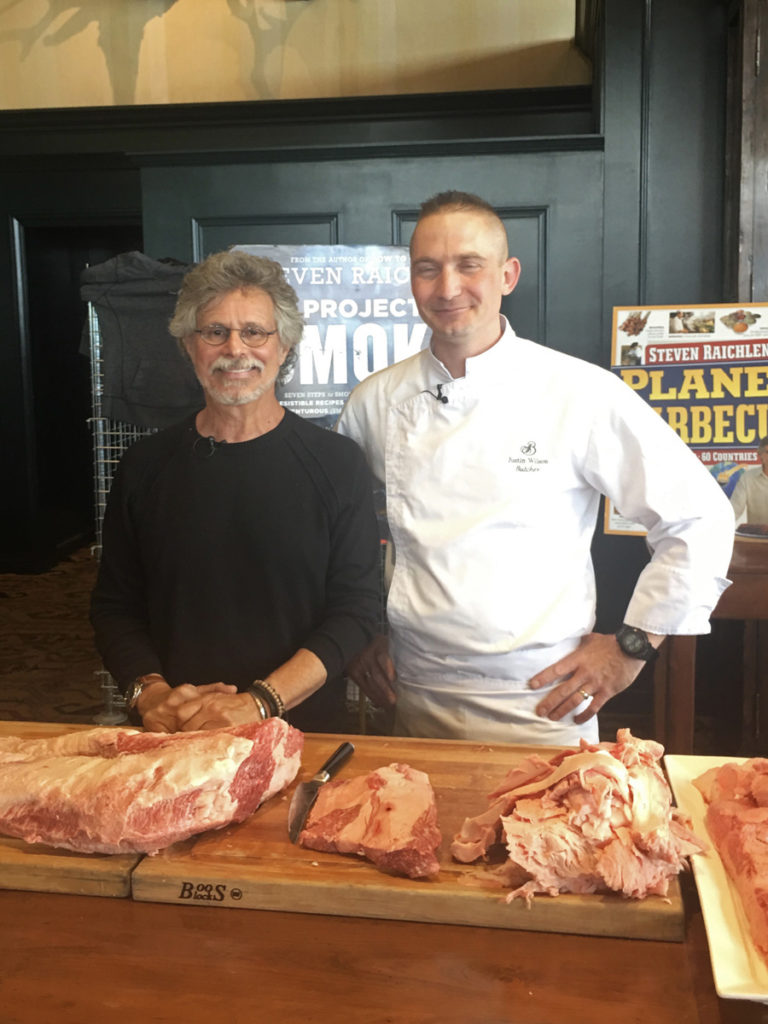 I cooked the A5 at Barbecue University, my live fire cooking school, which took place last year at the Broadmoor resort in Colorado Springs. (New location to be announced shortly.)

My other partner was Big Green Egg. I figured, if ever there was a cooker that could handle a long slow smoke for the 14 hours I planned to cook the brisket, it was a Big Green Egg—make that a really big Big Green Egg, because we used the monster model XXLarge.

I kept the seasonings simple: equal parts coarse sea salt and freshly and coarsely ground black pepper—just enough to season the meat, but not to detract from its flavor. I kept the flat and point attached, because that’s how any serious pit master in Texas does it. And that’s how we Raichlens roll at our house: whole brisket or nothing.

We fired up the Egg using natural lump charcoal. I interspersed the charcoal with oak chunks. I chose oak because it produces a clean bright smoke flavor—not overpowering like mesquite and not overly mild like maple. 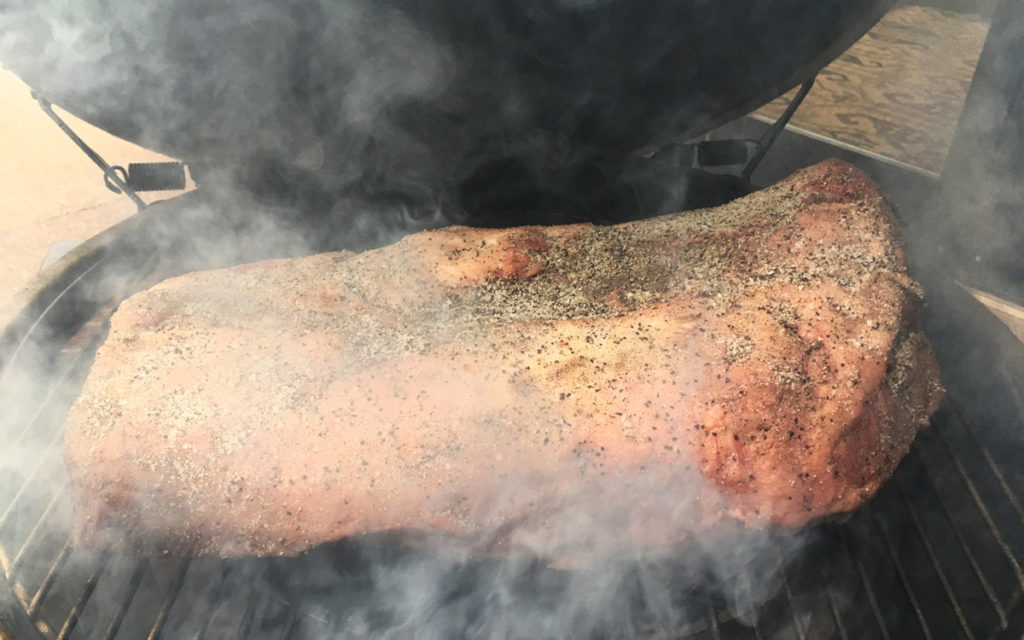 The first smoke lasted 10 hours—enough to take the brisket to 160 degrees. Meaning, I put it on around 8 p.m., so it could smoke overnight. I planned to check it around 6 a.m., which is no big deal for me because I’m an early riser by nature. Well, I was so excited about the A5, I checked it at 10 p.m., midnight, and 3 a.m. I got obsessed about getting it right.

By 6 a.m., the meat was looking gorgeous, so I initiated the second phase of cooking a brisket—inspired by Texas brisket legend Aaron Franklin—the wrap. I wrapped it in butcher paper to keep the moisture in, while allowing the steam to escape. The wrap is very important because it keeps the brisket from drying out.

By the time the students arrived at 9 a.m., we were close to my final target temperature of 205 degrees. At 10 a.m., we pulled the A5 off the Egg and put it in an insulated cooler. Then commenced the longest 2-hour wait I have ever had in barbecue. Because resting is the third, most challenging, and perhaps most important phase of cooking a brisket. You know you have a perfectly seasoned, robustly smoked hunk of meat that is so oozing with buttery fat, you want to dive in immediately. But if you let it rest for 1 to 2 hours, the meat will relax, the juices will redistribute, and your brisket will go from good to great to awesome and then some.

Well, somehow we managed to wait 2 hours, then we unwrapped the brisket and put it on the largest cutting board in the Barbecue University collection. I sliced it with a Shun brisket slicing knife link—a blade equally remarkable for its length, balance, and crafting as for its razor-sharp edge. We passed samples out to our students. And fifty normally lively people became as silent as monks.

The scent was what you’d expect from a 14 hour brisket—smoke and spice and beef in perfect equipoise. What surprised and astonished were the texture and taste. Imagine some weird wonderful amalgam of beef and butter melting like a snowflake on your tongue. Imagine the mouthfeel of foie gras with the smoky peppery bite of the best barbecued brisket. Imagine meat so rich, so exquisitely tender, you still taste on your tongue ten minutes after you’ve taken a bite. Imagine what angel would eat if the pearly gates happened to be located in Texas Hill Country. 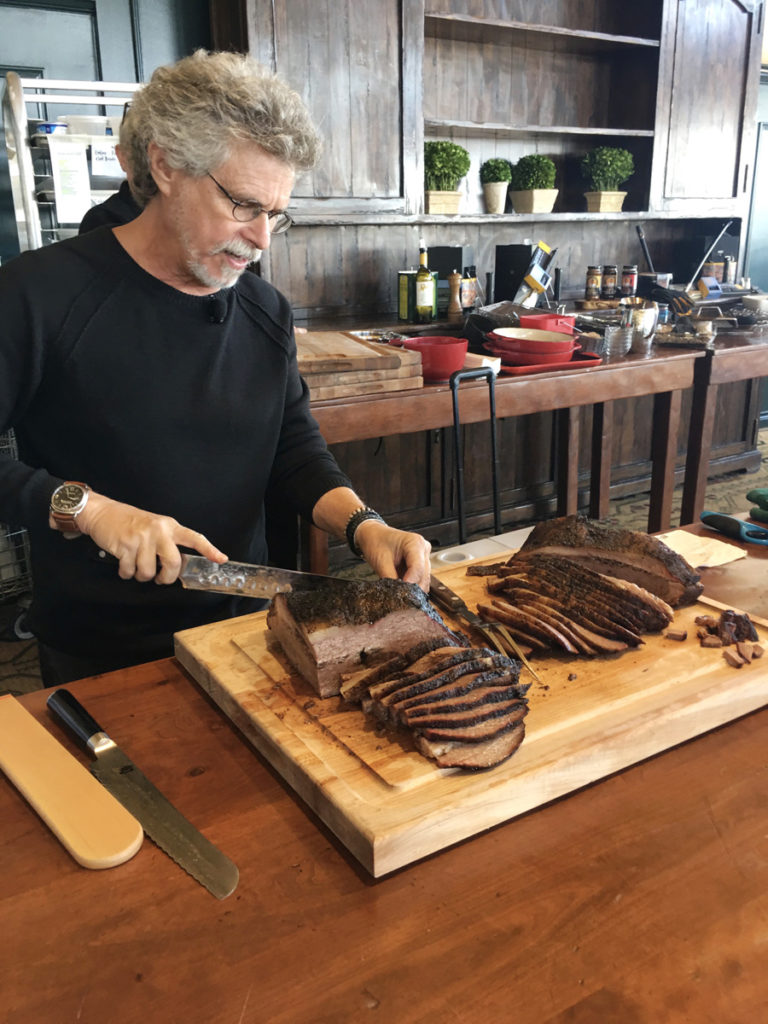 It took two years for Crowd Cow to source the A5 and arrange to bring it into the U.S. It took 1 hour to season and trim it, 14 hours to smoke it, and 2 hours to rest it. It took about 10 minutes for 50 Barbecue University Students to devour it to the last bite. But cooking and eating it was an experience we’ll remember for the rest of my life.