How to Cure and Smoke Bacon at Home 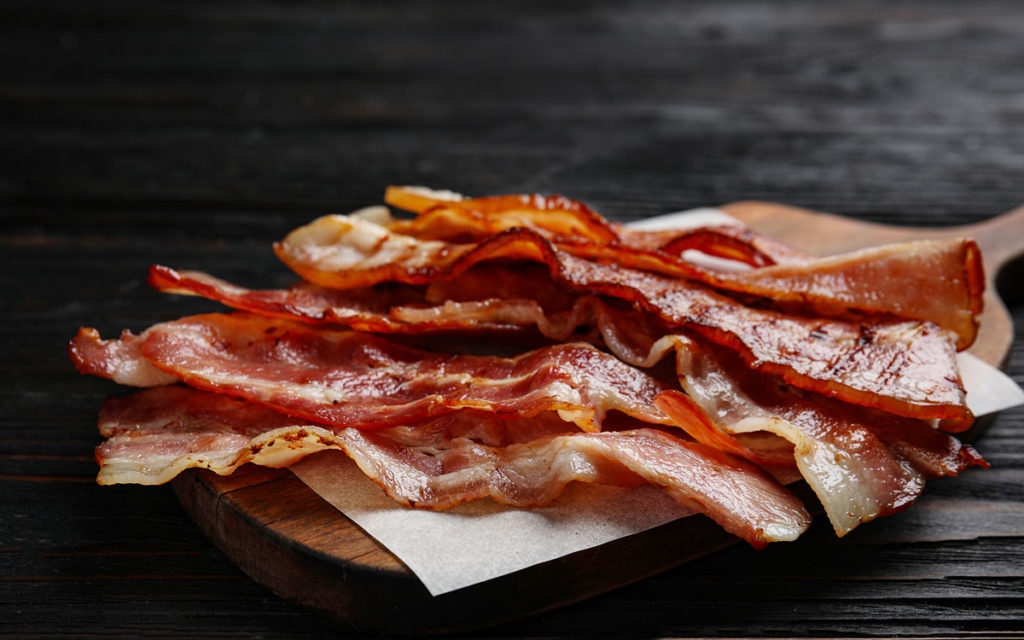 You’ve probably seen Steve Nestor even if you’ve never met him. He’s the fire wrangler on my Project Fire TV show. He’s the guy who assembles and fires up all our grills. He’s also a physical therapist and a pretty terrific cook. So when Steve talks about a recent triumph on the grill, I listen. And here’s what Steve has to say about curing and smoking bacon at home. —Steven Raichlen

You had me at bacon!

Have you every made your own bacon? I have always wanted to try and was finally motivated to make bacon after watching the process while working on Season Three of Project Fire as the resident fire wrangler. If you want to know what a fire wrangler does you can check out my blog “Behind the Scenes as a Fire Wrangler”.

Bacon dates as far back as 1500 BC when the Chinese would cure pork bellies with salt. At the same time, pigs were being domesticated and raised for food on the European continent. Even the Roman Empire had their version of bacon (petaso) that was boiled with figs, and then browned and seasoned with a pepper sauce.  The phrase “Bring home the bacon” refers to a 12th century English church that rewarded men who claimed not to have argued with their wives for a year and a day with a much-coveted side of bacon.

Bacon, or “bacoun,” was a Middle English term referring to pork in general. It comes from the Old Teutonic word “backe,” meaning back. Irish and Canadian bacon is made from the pork loin, a cut located near the animal’s spine, not the belly. I used a pork belly to make my bacon.

There were 15 pounds of pork belly ordered for one of Steven’s new recipes on Project Fire. One advantage of working as the fire wrangler is that I was able to take the last pork belly home. Steven’s new recipe is a guarded secret until the show airs in April of 2021, but I will share with you how I made bacon following his recipe in his book Project Smoke (page 113).

All homemade bacon recipes require patience. Start to finish, the process can take 9 or 10 days before you are eating bacon.

Bacon made from pork belly typically starts with a dry cure.  Irish and Canadian bacon are made from lean pork loin and utilize a brine to cure the pork.  The brine keeps the pork loin moist while smoking. Feel free to experiment with a brine on a pork belly.

The dry cure I used called for:

Mix all the ingredients in a bowl with your fingers. 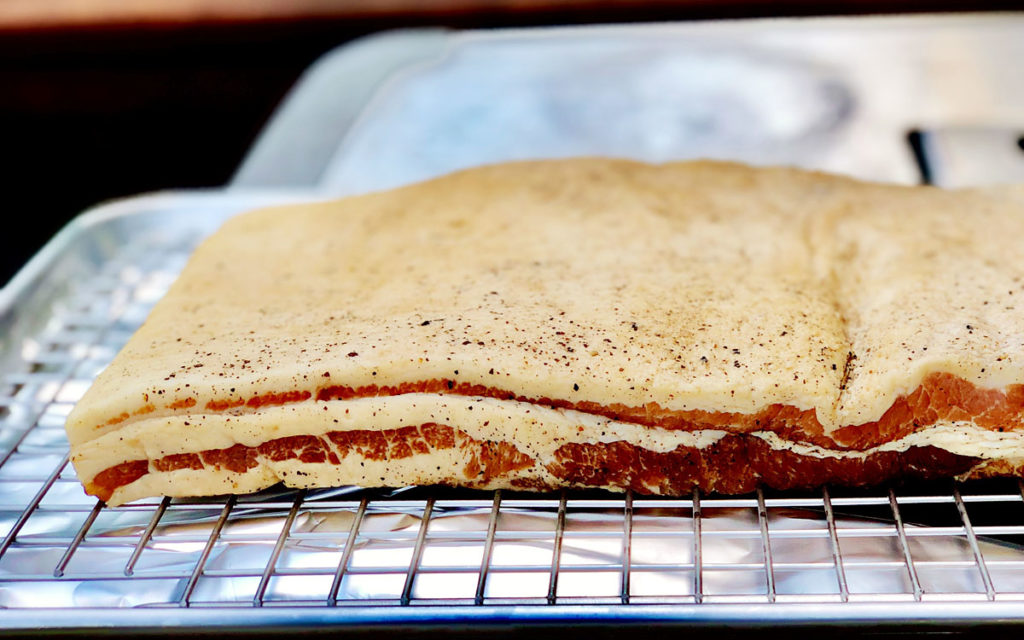 I set-up a Big Green Egg XL with wood chips dispersed throughout the charcoal. Once the smoker reached 175 degrees, I placed the pork belly on the grate over the deflector plate. To maintain a temperature of 175, I attached an airflow controller to the bottom vent.

The temperature was on target, there was a steady flow of smoke exiting the top vent, and I was on my way, or so I thought.

The biggest challenge I faced was getting enough fire to ignite the wood chips to create smoke, but not so much heat that the temperature spiked. The air flow controller did not turn on since I was trying to obtain such a low temperature, so I removed the controller.  The temperature spiked and I gradually adjusted the top and bottom vents, but then the smoke stopped due to the lack of oxygen getting to the fire. 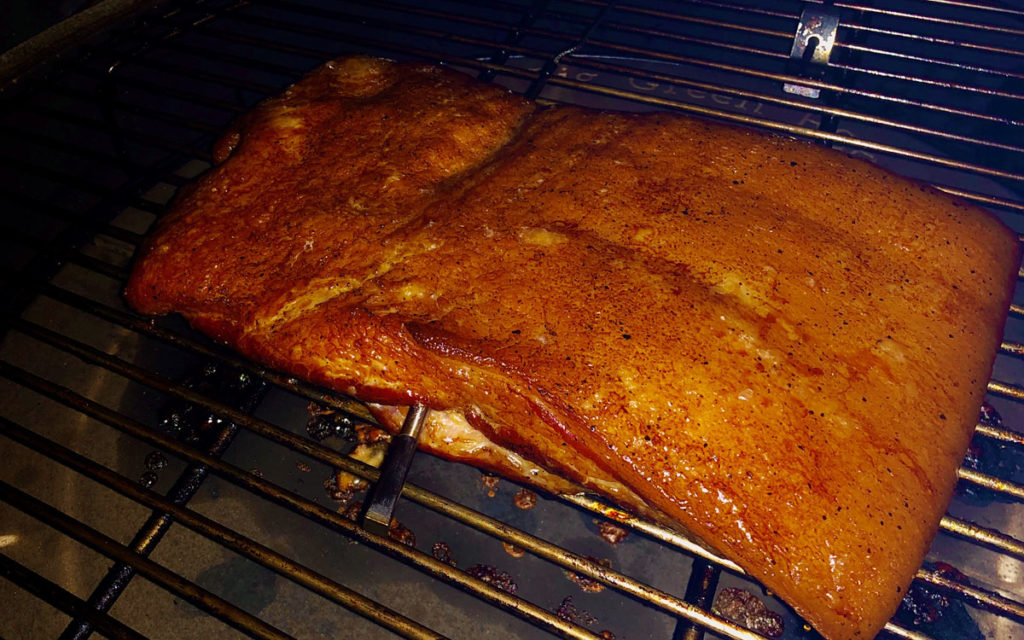 I placed the pork belly on a on a wire rack over a rimmed baking sheet and let it cool. Once the pork belly cooled, I wrapped it in plastic wrap and set it in the refrigerator overnight. 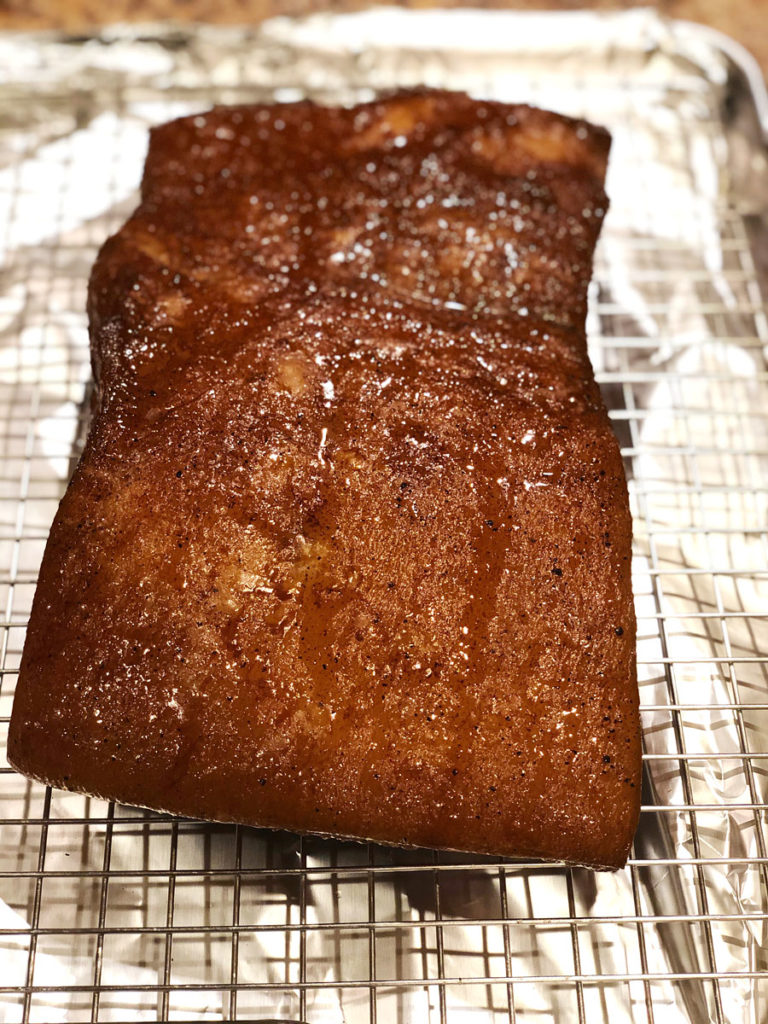 The big moment had finally arrived! It was time to slice, cook, and eat my homemade bacon. The advantages of making homemade bacon include selecting the quality of pork you use, the seasonings for the cure or brine you use, and how thick or thin you slice the bacon.

Bacon goes with almost everything, but bacon with breakfast is one of my favorites. The next day I set up the Big Green Egg XL with the plancha and griddle attachments. I cooked the bacon, home fries, and eggs for a breakfast sandwich.  I’m looking forward to incorporating the homemade bacon into other recipes. 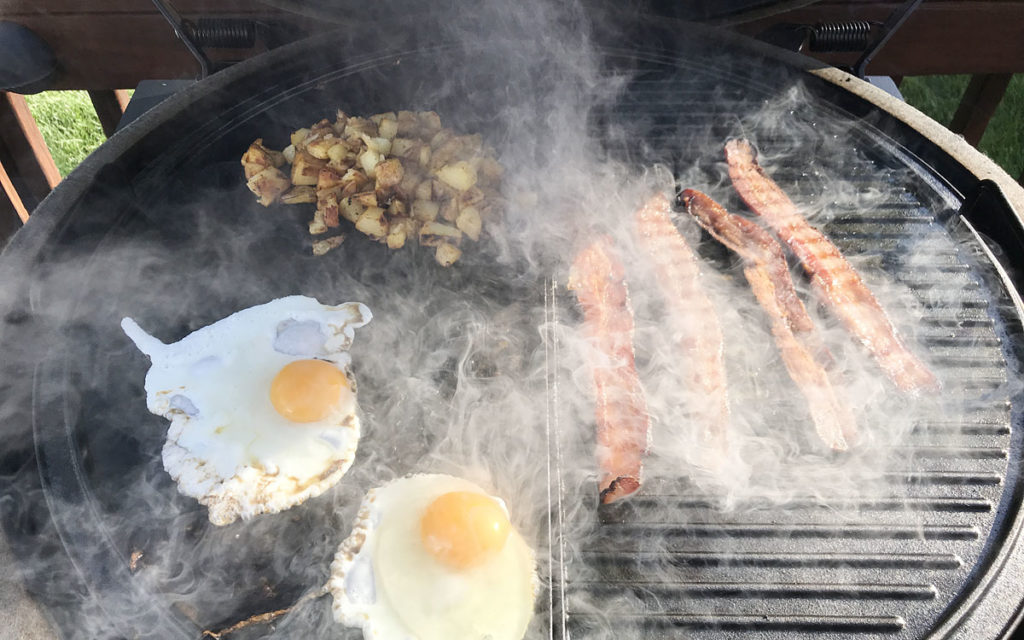 Making my own bacon was fun and educational. The recipe is easy to follow but controlling the low temperature can be a challenge. I might recommend an electric or pellet smoker if you have one. The next time I make bacon, I plan to use a kettle grill utilizing the snake method that will allow me to keep the temperature low and produce a steady flow of smoke.

I hope my experience with Steven’s recipe will inspire you, as it did me, to make your own bacon!