Going Whole Hog in less than 4 Hours for July 4th!!! 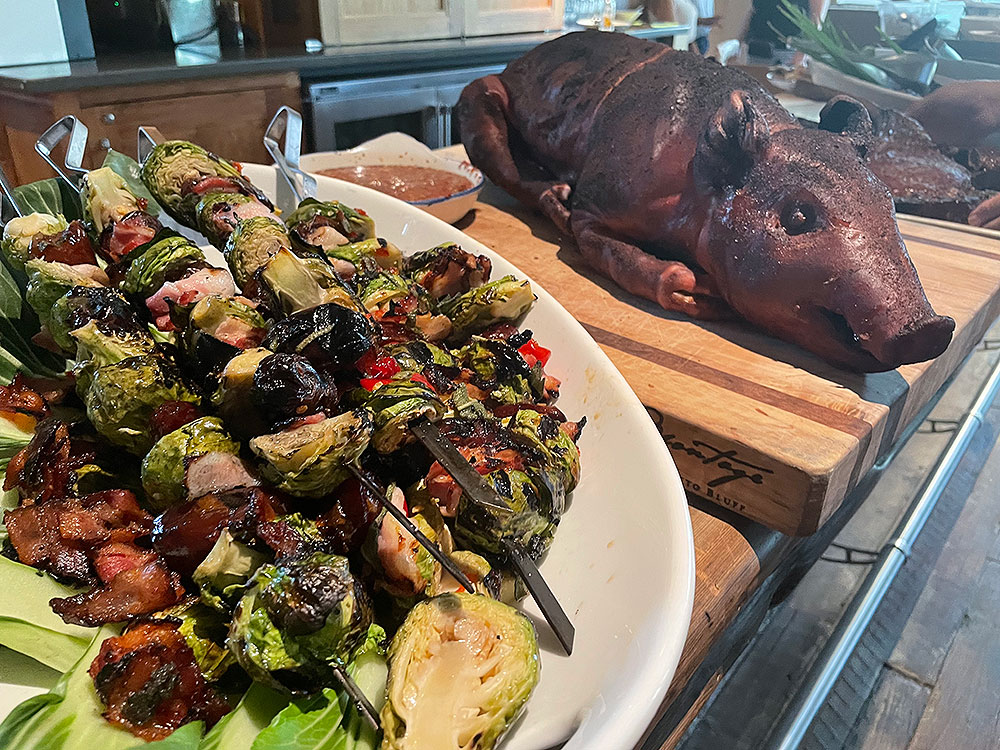 Can you imagine having whole hog for a 4th of July cookout? Whole hog is the Mount Everest of barbecue—a feat aspired to by all and attempted by far fewer—the summit of the pit master’s experience and art.

It normally requires some serious gear—a competition-strength pit and a walk-in refrigerator, for example, not to mention an overnight or all-day cook that leaves the pit master exhilarated but completely exhausted when it comes time to serve it.

Then, there’s the question of timing—just how long do you cook a whole hog? And heat control—how hot should your fire be and how do you keep it going for a cook time measured not in hours, but half days?

But suppose there was a way to cook a whole hog in a few hours with equipment you probably have in your backyard.

There is, and it comes by way of our friends at the premier online meat purveyor, D’Artagnan: cook a whole suckling pig. Suckling pig offers all the pleasures of whole hog—the luscious shoulder, the meaty ham, the succulent ribs—but on a smaller, more manageable scale. 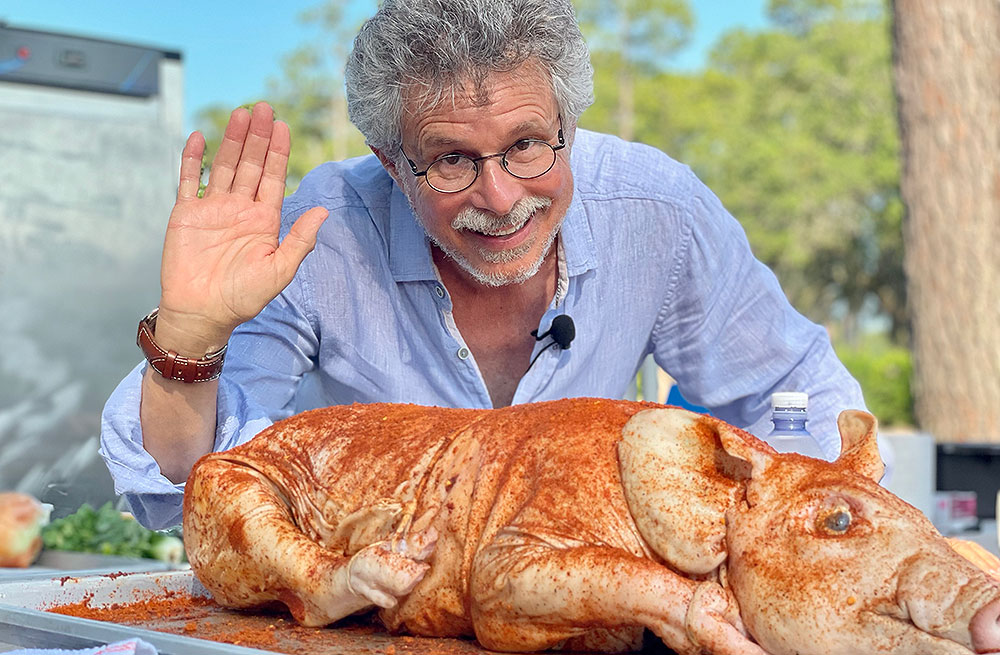 The suckling pig D’Artagnan sent weighed 18 pounds—large enough to serve 8 to 10 people, but small enough to fit in the Weber Ranch grill. The suckling pig was shipped to Barbecue University, so I had the luxury of a commercial refrigerator to defrost the pig. But it would have fit in my garage refrigerator.

Can Cook a Whole Hog in Your Backyard in Less Than 4 Hours?

To cook the pig, I had the pick of any one of the impressive grills and smokers at Barbecue University. Due to the size of the suckling pig (approximately 2 feet long), I selected the Weber Ranch grill. If you have never seen the Ranch, picture a kettle grill on steroids. You could also use an extra large Big Green Egg or a large pellet grill. 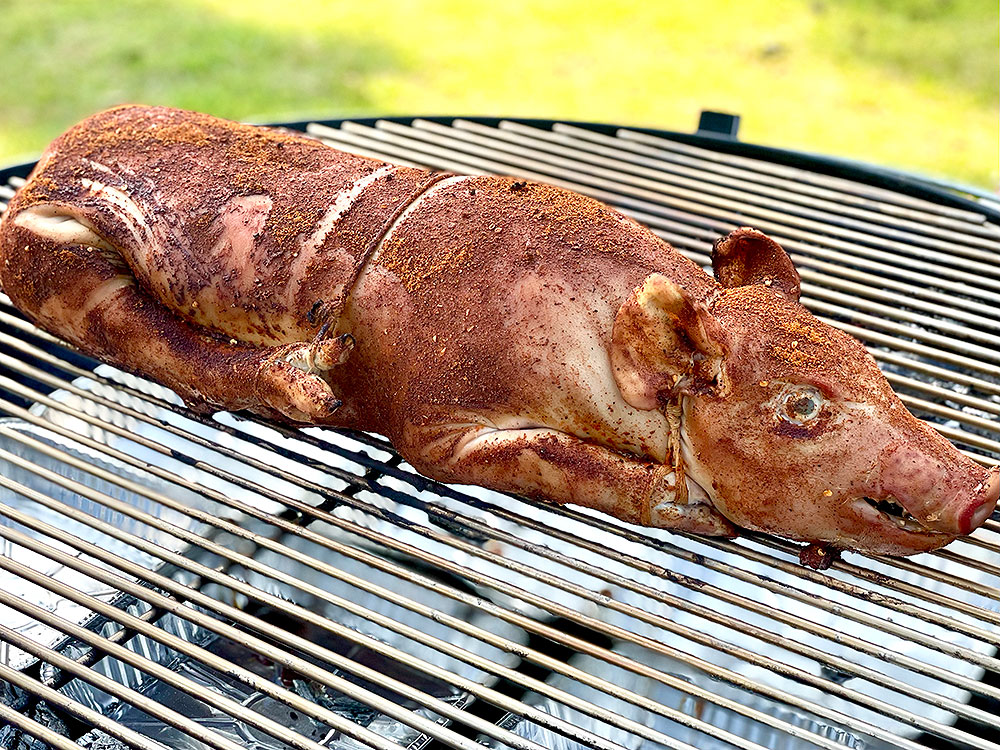 I set up the Weber Ranch for indirect grilling by placing foil drip pans in the middle and loading the sides of the grill with lump charcoal I fired up in four chimney starters. The foil pans serve two purposes; to catch the dripping fat and to keep the charcoal to the side of the grill, not under the pig. I seasoned the pig inside and out with Steven’s Carolina Pit Powder Rub. 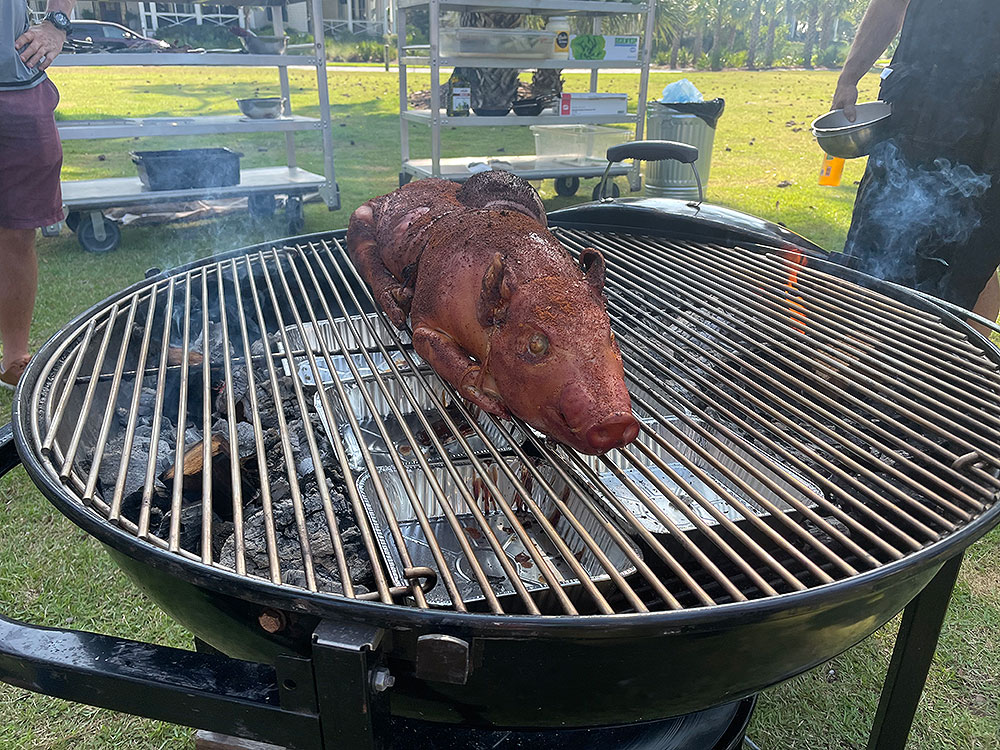 Once the pig was seasoned and the Ranch was hot, I placed the pig in the middle of the grill over the drip pans and placed a two apple wood chunks on each side of the grill. I adjusted the vents to the halfway open position to control airflow and achieve a grill temperature of 325 degrees. 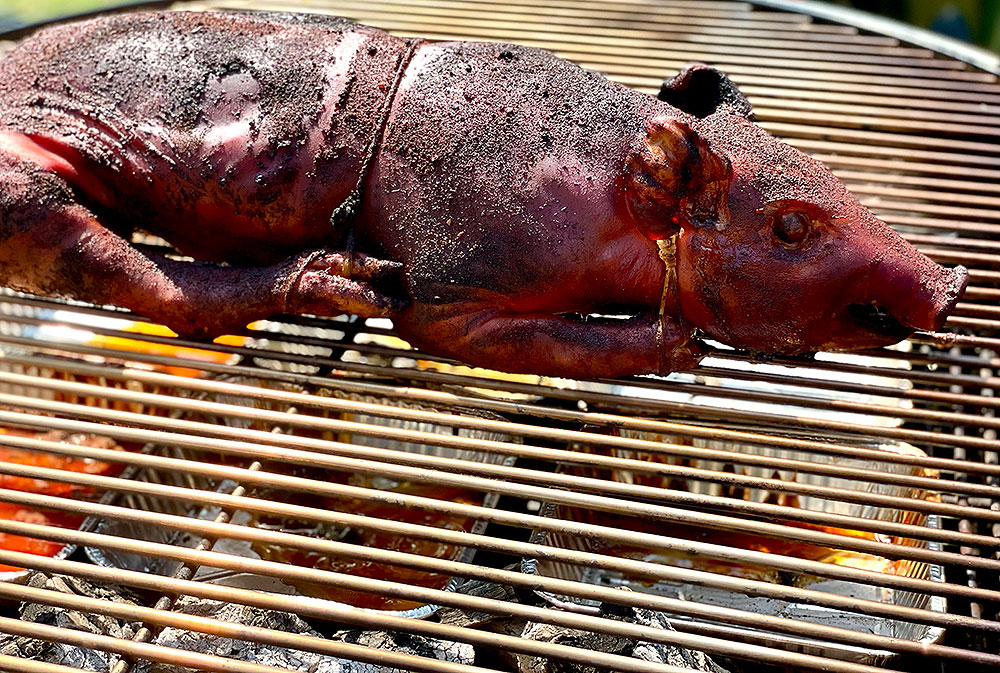 Once the skin was browned and crispy, I covered it with foil to keep the skin from burning while the meat continued to cook. Total cooking time was just shy of three hours. The pig was rested and carved up.

The cooking process was easier than I expected. I cooked the pig while simultaneously helping students with their grills and recipes during class. The field chef at Barbecue University offered to carve the pig. It was my time to be the student.

The chef started by removing the head, and then sliced down the back to remove the loins. The hind quarters and front legs were carved off like the legs and wings on a chicken. The skin was removed and left on the cutting board for anyone interested in the skin. The chef left the pig in larger pieces, but the meat could have been pulled instead. 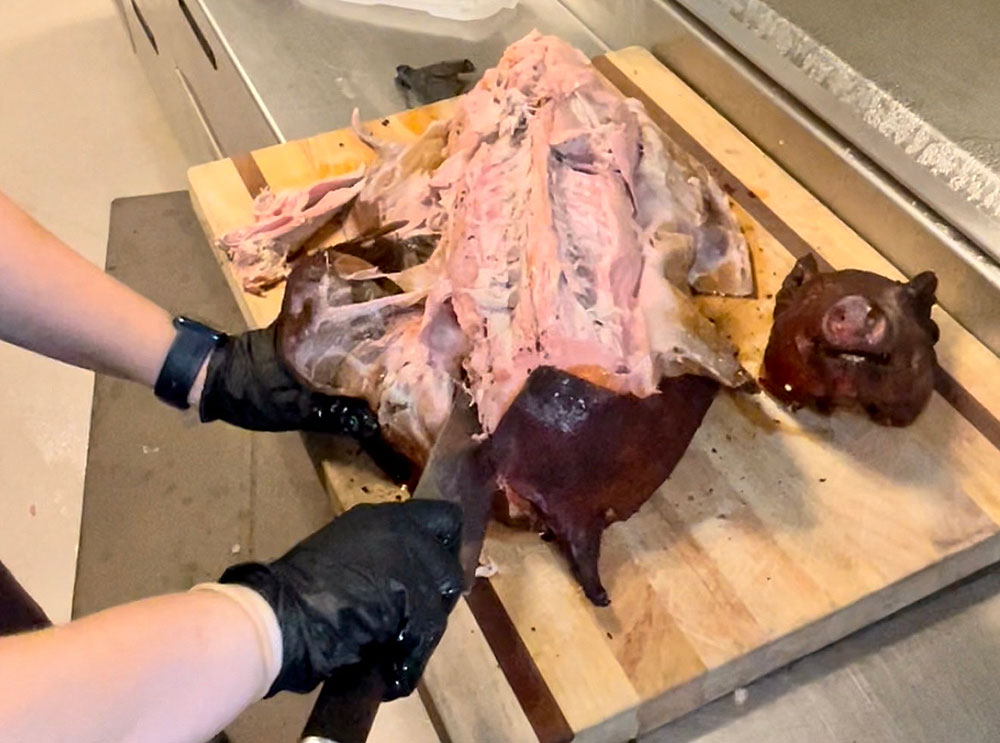 Luckily, I sampled the pig during the carving process, as once it was set out for the students, it disappeared.

The first part of the pig I tasted was the tenderloin. It was juicy, smoky, and more tender than any pork tenderloin I have ever eaten! Next, I sampled meat form the front and back legs. It was fattier, but the vinegar sauce was the perfect match to cut the richness of the pig. (I used Steven’s Vinegar Sauce as my guide.) The vinegar sauce had a hint of sweet from the brown sugar and some heat from the chili flakes. The students raved about the flavor and tenderness of the pig and the kick from the vinegar sauce. Thank you, D’Artagnan, for the sending the suckling pig to Barbecue University for everyone to experience.

Almost every part of the suckling pig was eaten. I even witnessed one student enjoying the head of the pig!

If you break down the whole process it is just a series of simple steps. Defrost the pig, season the pig, light the grill, spray or mop the pig while it cooks, monitor the temperature, rest, carve, and eat!

So, are ready to take on the challenge of a suckling pig? If so, D’Artagnan has got you covered!