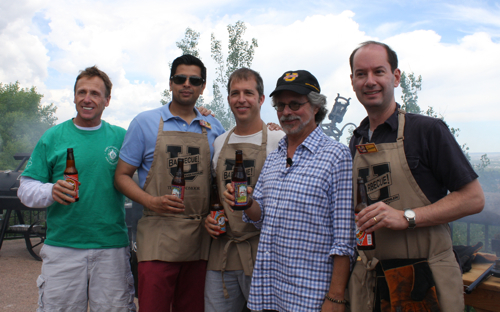 It’s Oktoberfest! Not that this barbecue community needs an event to honor the inviolable bond between beer and barbecue. Germans celebrate the connection with Oktoberfest—two raucous weeks of beer drinking and partying in Munich, which paradoxically (and for reasons I’ve never quite understood) starts in September (this year, September 21 to October 6, and for planning purposes, September 20 to October 5 in 2014).

If you’re lucky enough (or foolhardy enough) to attend Oktoberfest, you’ll experience some distinctly German versions of barbecue, which haven’t quite yet made it to the U.S. For example, ochsenbraterai — a whole steer roasted on a spit over an open wood fire. Orsteckerlfisch—a whole fish (such as bream, trout, or mackerel) stuffed with garlic and herbs, basted with oil, skewered on a steckerl (stick or branch in the Bavarian dialect), and grilled camp-style over a wood fire.

I’ll never forget my first Oktoberfest in Munich (although there’s a lot I can’t remember). The year was 1976; I had come to Germany to study medieval cooking in Europe as part of a Watson Foundation Fellowship I won upon graduating from college. I remember finger-thick bratwurst grilled over pinecones at a street fair on the way to Munich. (So much for the cardinal rule of grilling only over hardwoods.) I remember schweinshaxen, Munich’s famous juniper- and mugwort-marinated fresh ham hocks roasted on a charcoal-burning rotisserie at the landmark restaurant Haxenbauer. (Read all about it in Planet Barbecue!)

I remember drinking Bavarian beer by the mass, one-liter gray earthenware stein, served by muscular waitresses decked out in dirndls. (I also remember the bizarre feeling being a Jew surrounded by hundreds of thousands of Germans in the city where Hitler rose to power.) I drank another mass, then another, and the next thing I remember was waking up the next day in a strange hotel without the faintest idea how I got there.

All of which is a lengthy prologue to the theme of this newsletter—beer and barbecue—and how they work together. I’m not just talking about drinking beer at a barbecue — the beverage of choice at grill sessions from Biloxi to Buenos Aires to Bali. No, I’m talking about how people around Planet Barbecue use beer in their smoking and grilling. And here are three luscious beer-based recipes to whet your palate:

How do YOU grill or barbecue with beer? Share your photos and recipes on the BBQ Board.

Raising a cold one to your health!
Yours in righteous grilling,
Steven Raichlen