No matter what your net worth, there’s something supremely satisfying about feeding your family and friends well with limited resources. Anyone can drop $100 on a beautiful hunk of prime rib, but it takes talent and heart to turn low-cost victuals into a feast. Given the combination of a volatile stock market, tightening credit, and an uncertain economic forecast, I thought you’d appreciate a few suggestions for the grill that don’t break the bank.

Though barbecue is democratic in nature—enjoyed by high-born and low, rich and poor— it is a religion that has traditionally been preached in America from the pulpits of the budget-minded.

The slaves were among barbecue’s early practitioners in the American South. They quickly discovered that the meanest cuts of meat were much improved by smoke, spices, and low, slow cooking. The cooking was done over ember-filled trenches dug in the ground—the origin of the modern barbecue “pit.”

Political rallies during the 18th and 19th centuries were often organized around epic barbecues (they were called “pig pickin’s” in the Carolinas), and candidates duked it out over who provided the best comestibles. These barbecues were a way to feed a lot of people for not much money.

Yes, the history of live fire cooking is entwined with tales of thrifty people whose ingenuity led to some of our most beloved iterations of barbecue.

Saving Money
As any shrewd shopper knows, bargains in meat, poultry, and seafood are getting harder to find. The industry claims corn and its importance to the alternative fuel ethanol is to blame in part for the steep price increases we’re seeing at the butcher and dairy counters. But supply and demand bear responsibility, too, and as more people smoke brisket and ribs at home, the price of these cuts rises. It doesn’t help things when star chefs like Thomas Keller feature beef cheeks, lamb tongues, etc., on their upscale menus.

So, how do you save money?

Well, first use neglected or overlooked cuts. Baby back ribs have achieved star status, but spare ribs and country-style ribs (the latter direct-grilled like pork chops) are still affordable cuts of pork. Beef long and short ribs (see recipe below) and lamb ribs are also quite reasonable and deliver huge flavor for your investment.

Brisket prices have crept up, especially for the lean center cuts. But a whole brisket, sheathed in fat, with point and deckle attached, is still quite reasonable—and it’s a lot easier to cook without drying it out than the leaner version. Even better, ask your butcher to order you a clod (whole beef shoulder). Cook it low and slow as you would brisket (see a recipe on page 164 in BBQ USA). The flavor will come as a revelation. And it will serve a crowd of 20 to 30 people.

Asians have evolved a sensible strategy that saves you not only money, but calories, cholesterol, and fat grams. They often use meat as a flavoring or condiment—rather than a huge, plate-burying hunk of protein. Consider the Thai Grilled Beef Salad (recipe below) where a single flank steak will serve 4 or more people. A single salad can be as satisfying as a steak dinner when it’s paired with such explosively flavorful seasonings as chilies, fresh basil, mint, cilantro, fish sauce, and lime juice. In addition to the recipe I’m sharing below, you can find more Asian-inspired recipes in my story on healthy barbecuing in the June/July issue of Best Life magazine.

Finally, another way to trim the cost is to avoid meat entirely. Believe it or not, one of the most oft-requested recipes from my files is a rich grilled version of macaroni and cheese, made famous in “BBQ U” Season 4, that has the most unrepentant carnivores reloading their plates. Don’t believe me? Try it for yourself with this recipe.

Get out of your grilling and barbecueing comfort zone and try your hand at unfamiliar cuts like the aforementioned rib tips, tri-tip, or beef shoulder clod. Or grill up skirt or hanger steak for authentic fajitas, or beefy-tasting flat iron steaks, a relatively new cut from the shoulder. Make friends with your butcher or fish monger and ask them to keep you abreast of good buys.

As always, for great ideas and information and lively discussions about grilling and barbecueing, visit the Barbecue Board.

Five-Spice Short Ribs with Shanghai Barbecue Sauce
Here’s a preview of one of the recipes on my new TV series, “The Primal Grill” with Steven Raichlen. Shows will begin airing in May on PBS. Meaty but value-priced beef short ribs get an easy but exotic rub before being smoked to tenderness, sauced, and sizzled. 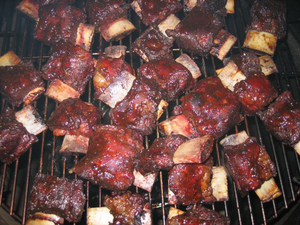 Source: “The Primal Grill” with Steven Raichlen
Method: Indirect grilling
Serves: 4 to 6
Advance Preparation: 4 to 6 hours for marinating the meat

1) Make the rub: Combine the 5-spice powder, salt, sugar, and pepper in a small bowl and whisk to combine.

3) Generously sprinkle the ribs on all sides with the rub. Cover the ribs with plastic wrap and refrigerate them while you set up the grill.

5) Cover the grill and cook the ribs until they are well-browned, cooked through, and tender enough to pull apart with your fingers, about 1-1/2 to 2 hours. When the ribs are done, the meat will have shrunk back from the ends of the bones by about 1/4 inch.

6) Just before serving, brush the ribs on all sides with the Shanghai Barbecue Sauce and move them directly over the fire. Grill until the sauce is sizzling, 1 to 3 minutes per side. Watch carefully so the sugars in the barbecue sauce don’t burn.

7) Transfer to a large platter or cutting board and let rest for a few minutes. Serve with the remaining barbecue sauce on the side. 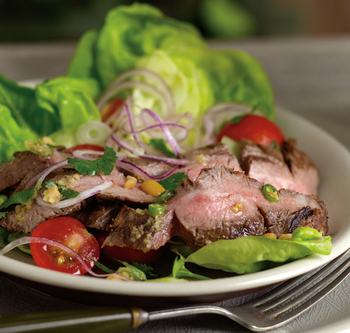 1) Lightly score the flank steak in a crosshatch pattern, making the cuts 1/4 inch deep. Place the meat in a glass baking dish. Combine the soy sauce, fish sauce, sugar, garlic, and ginger in a mixing bowl and whisk until the sugar dissolves. Pour this mixture over the steak and let marinate, covered, in the refrigerator for at least 2 hours or as long as 8, turning several times.

2) Preheat the grill to high.

3) Make the dressing. Grind the garlic, chiles, and sugar to a paste in a mortar with a pestle. Work in the fish sauce and lemon juice. Alternatively, puree in a blender or small food processor.

4) Prepare the salad. Line a platter with the lettuce leaves and arrange the cucumber slices, onion, cherry tomatoes, and mint leaves (if using) on top.

5) When ready to cook, drain the steak. Oil the grill grate, then place the steak on the hot grate and grill until cooked to taste (4 to 6 minutes per side for medium-rare), using tongs to turn. Transfer the steak to a cutting board and let cool slightly or completely. The salad can be served warm or at room temperature. Thinly slice the steak across the grain on the diagonal. Spoon the dressing over the salad and arrange the beef slices on top. Sprinkle with the cilantro and roasted peanuts and serve.