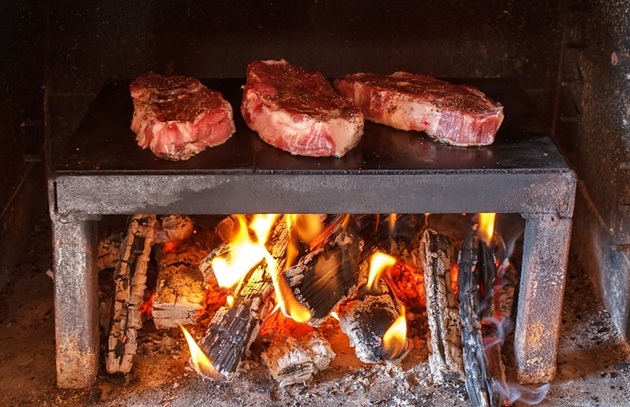 It was a typical day on the barbecue trail: a bone-jarring drive halfway across northern Italy—a small price to pay for what was reputed to be one of the best purveyors of bistecca alla fiorentina (Florentine steak). I was looking forward to real chianina beef (from a slow-maturing breed of Italian cattle prized for its dark, rich-tasting meat) cut four-fingers thick by a grill master named Angelo Leocastre. We arrived at the destination—a converted 17th century hunting lodge—at dusk, but a tour of the property revealed neither grill nor wood smoke. My despair grew until 9 p.m., when Leocastre summoned us not to a grill, but the fireplace.

As the nights turn cool and darkness comes early, many people retire their grills for the winter, but this is precisely the sort of weather an Italian cherishes for grilling. In northern Italy, grilling is often done indoors over an oak fire in the fireplace. Indeed, in Friuli, in northeastern Italy, there’s even a special indoor-raised hearth (picture a stone fireplace on legs) called a focolare.

The fireplace is the oldest indoor grill. The ancient Romans called it a focus (hearth), and its central role in cooking, domestic wellbeing, and promoting general human happiness made it the literal and spiritual focal point of the home. (Remember that the next time your spouse tells you to focus.)

The invention of cook stoves in the 19th century and central heating in the 20th century effectively made the fireplace an aesthetic relic in the U.S. (Think of it—for most of human history, people depending on the hearth for cooking.) In many parts of the world—some examples include Argentina, Italy, France, and India—cooking on an indoor hearth remains a living art.

Forget the massive, tricked-out medieval or colonial hearths you may have seen at historic sights, bristling with trammels, cranes, cauldrons, trivets, etc. (A lot more on those in future blogs.) Little special equipment is required for cooking in a fireplace. But you will need:

Here are a few of your cooking options:

Are you inspired to try this ancient cooking method? For more than 250 recipes that can be adapted to fireplace grilling, check out my book Indoor! Grilling.

Try these two recipes this weekend and post your photos on the Barbecue Board:

Yours in righteous grilling,