By Steven Raichlen
Share
Tweet
Pin
0 Shares
May 5, 2009
UP IN SMOKE:
SPECIAL MOTHER’S DAY EDITION
Dear Up in Smoke Subscriber:

There’s a perception in the U.S. that grilling is the domain of men—that a Y chromosome is a prerequisite for playing around with fire.

Well, guys, I’ve got news for you: According to a Propane Education & Research Council (PERC) survey, more women than ever before are involved in the grilling process—from purchasing food and hardware to firing up the grill. In fact, more than 34 million women report using a grill “a couple of times a week” during grilling season last year, and another 3.4 million claim to grill “every day.”

Of course, if you travel the world barbecue trail as much as I do, this won’t come as much of a shock. In many parts of the world, women at the grill are the norm, even the majority—not the exception. While researching my next book, “Planet Barbecue,” I’ve encountered many formidable grill mistresses.

There’s Azlinah Kudar, the headscarf-wearing owner of the famous grilled fish restaurant Gerai 11 & 12 in Melaka, Malaysia. And Milica Perunovic, the Montenegran-born chef-owner of the popular restaurant Chubura in Belgrade—lightning-fast and laser-focused, she makes multi-tasking at the grill look like child’s play. And how could I forget the shy woman I met at a grill stall in Oaxaca, Mexico—she would only give me her first name, Laura—who taught me how to make the Cecina Adobada (Chile-Marinated Pork) in The Barbecue! Bible.

Closer to home there are the ’Que Queens—Karen Adler and Judith Fertig—whose popular books like The BBQ Queens’ Big Book of Barbecue (Harvard Common Press, 2005) give the female perspective on the venerable arts of smoking and grilling. Another wave-making grill mistress is Elizabeth Karmel, author of Taming the Flame (Wiley, 2005) and the creative force behind Hill Country, the excellent Texas-style barbecue restaurant in New York City.

So with so many remarkable women grill masters, how did barbecue come to be considered a “guy” thing? Anthropologists point to traditional hunter-gatherer societies, where men took on the roll of procurers of animal protein, which they butchered and roasted on impromptu campfires. 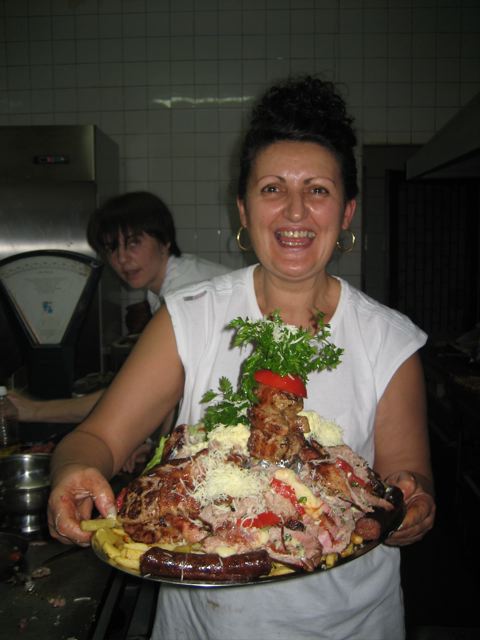 Women gathered roots, fruits, and starchy tubers, which were better suited to boiling, stewing, or slow-roasting in the ashes.

Of course, it may be that women just have more common sense than their male counterparts. “Why stand outside in the sun (or rain) downwind of a hot, smoky barbecue grill, when I can get my husband to do it?” one lady friend observed wryly.

Even when women aren’t grilling, their presence is felt everywhere.

“Here’s how it works at our house,” explains my wife, Barbara. “I pick the date, plan the party, invite the guests, do the shopping, make the marinades, set the table, and orchestrate the serving and clean-up.  Steven spends 20 minutes sticking the food over the fire and they call him America’s ‘grill master’.”

Incidentally, reservations for Barbecue University at the Broadmoor in Colorado Springs, Colorado, would make a spectacular Mother’s Day gift! BBQ U
is a great bonding experience for mothers and daughters, mothers and sons, or husbands and wives. For details, go to http://www.barbecuebible.com/bbqu/.

Well, regardless of who usually wields the tongs in your family, Sunday is Mother’s Day, a perfect time to show the moms in your life your boundless appreciation for all they do—namely by grilling a Mother’s Day feast just for them. By ‘feast,’ we don’t necessarily mean brats and beer, guys. Here’s a brunch menu designed by Up in Smoke Features Editor and a mom herself, Nancy Loseke. Hey, besides thanking the most important woman in your life, you get an excuse to fire up the grill before noon.

Bloody Marys are, of course, a brunch drink classic. We like to set up a bloody mary “bar” where everyone can custom mix his or her own to taste. (Also great for tailgate parties.)

Here’s how you do it:

Set out glasses, vodka, a pitcher of good-quality tomato juice (we like the Sacramento brand, especially when laced with a couple of judicious drops of liquid smoke), and any or all of the following:

1. Make the marinade. Combine the soy sauce, pineapple juice, brown sugar, oil, vinegar, and ginger in a bowl and whisk to mix.

2. Cut the pineapple widthwise into 1-inch slices. Cut each slice into 6 wedges to make 1-inch chunks. Stir the pineapple into the marinade and marinate for 1 hour.

3. Drain the marinade off the pineapple and strain into a heavy saucepan. Boil the mixture until syrupy, 5 minutes. Set this mixture aside: you’ll use it as a glaze.

4. Meanwhile, wrap each pineapple chunk in bacon, placing a sprig of cilantro (if using) between them. Secure with a toothpick or skewer. The recipe can be prepared several hours ahead to this stage.

5. Set up your grill for direct grilling and preheat to high. If grilling the pineapple on bamboo skewers, fold a 12 by 18 inch sheet of aluminum foil over three times to make a shield to protect the skewers.

1. In a large bowl, whisk the eggs, milk, mustard, chives, hot sauce, and salt and pepper.

2. Nest the two pans (this is for strength), and grease the top one with butter.

3. Spread half of the bread cubes on the bottom of the greased pan. Top with half the vegetables, sausage, and cheese. Repeat. Pour the egg mixture evenly over the top. Cover the strata and refrigerate overnight.

4. The next day, remove the strata from the refrigerator and bring to room temperature. Set up the grill for indirect grilling and preheat to medium (about 350 to 375 degrees). Uncover the strata, and place on the grill grate away from the coals or in the unlit portion of the grill. Cover the grill. Cook the strata until it is firm in the center and golden brown on top, about 45 minutes to an hour. Let rest for 10 minutes before cutting into squares and serving.

PEACHES ‘N CREAM ON THE GRILL

1. Prepare the whipped cream. Place cream in the chilled bowl of a stand mixer or in a metal bowl over ice. Beat to soft peaks, 5 to 7 minutes. Add the confectioners sugar, cinnamon, and rum and continue beating until the cream is stiff, 1 to 2 minutes more. Keep the cream chilled until serving.

2. Set up your grill for direct grilling and preheat to high.

3. If using regular peaches, cut each in half around its circumference to the seed, starting at the stem end. Twist the halves in opposite directions to separate them. Using a spoon, pry the stone out of the half that it’s lodged in. If using doughnut peaches, remove the stems.

4. Brush each peach half (or whole doughnut peach) with melted butter and sprinkle with sugar. Brush and oil the grill grate. Arrange the peaches on the grill cut side down (simply on the grill if using a doughnut peach). Grill until golden brown on both sides, 2 to 4 minutes per side. Transfer the peaches to a platter or plates, cut side up, and place a dollop of whipped cream on top. Garnish each peach half with a mint leaf. Serve any remaining whipped cream on the side.