Salt of the Earth

By Steven Raichlen
Share
Tweet
Pin
0 Shares
February 19, 2008
UP IN SMOKE
SALT OF THE EARTH
Dear Up in Smoke Subscriber,

Quick: name one ingredient no grill jockey in the world would be without. The answer is easy. Salt. From Spain’s salt-crusted rib steak to Vietnam’s salt and pepper prawns to Scotland’s smoked salmon, salt is not only a seasoning, but an integral part of some of the world’s greatest grilled and smoked dishes. If you think that salt is just, well, salt, it’s time to take a fresh look.

For most of recorded history, sodium chloride—an essential mineral for humans and animals—was a precious commodity. It played a huge role in the evolution of the world as we know it. Anthropologists posit that the first human settlements and cities first rose where there were natural salt deposits. Humans followed animals to salt licks, etching the first dirt roads, and ultimately, the path to the world’s first social barbecues. Roman legionnaires were paid in salt wages (Latin: salarium argentum), giving rise to the word “salary.” Salzburg, Austria, Salt Lake City, Utah, and Saltville, Virginia, are communities named literally for the salt deposits around them.

Although you’d never guess it to look at exotic salt prices at your local gourmet shop, salt is not rare. It is, in fact, one of the most plentiful minerals on earth. The deposits under Kansas alone could service the planet’s salt needs for the next 250,000 years!

For culinary purposes, there are many different types of salt. Here are some of the most common, along with their suggested uses:

Table salt– This form of sodium chloride is used in over 70 per cent of households in the U.S. It is available plain or with iodine, an element required in trace amounts by nearly all living organisms. (In humans, iodine aids healing, helps regulate blood pressure, prevents goiters, and elevates the IQ of populations that have ready access to it.) Each crystal is tiny and cube-shaped, meaning it packs tightly. (Note: you should use less table salt if substituting it for kosher or coarse salt in a recipe. For a helpful conversion chart, go to www.mortonsalt.com .) It is the least expensive of the culinary salts, making it a reasonable choice for preparations calling for more than a few tablespoons of salt, such as brining, which can require several cups. It is also good for baking as it dissolves easily in liquid.

Kosher salt – Kosher salt is table salt that has been compressed and then flaked. This process increases its surface area so it can draw out more moisture from food. The large flat crystals also dissolve more slowly than table salt—which is one reason I like it so much for grilling. It doesn’t dissolve completely, so you get little pointillistic bursts of flavor when you bite into a kosher salt-seasoned steak or chops.

Sea salt – Sea salt results when seawater evaporates—sometimes in sluices specially designed for the purpose, sometimes in natural pools in salt marshes and tidal basins. Its color and flavor vary depending on the coastal area where it was harvested. It can range in color from white to grey to brown.

Unrefined sea salt, which has a moist appearance and is usually sold in jars, often goes by its French name: sel gris (“grey salt”). It tends to form coarse, pyramid-shaped crystals, which are exquisite for seasoning grilled seafood. Fleur de sel (“flower of salt”) is the highest grade of sea salt. It comes from France, and is skimmed by hand from the top of salt marshes. Another great sea salt, this one dry, comes from England and is called Maldon. These salts do not come cheap, but their flavor and texture are richly rewarding.

Specialty salts – Up to now, we’ve been talking mostly about everyday salts. Specialty salts come from the four corners of the globe and are used by the world’s grill masters for everything from Indian tandoori to a Hawaiian style luau.

The prize for the most distinctive incarnation of sodium chloride surely goes to Indian black salt, (actually, kind of purplish)—a coarse, unrefined mineral salt with a pungent, sulfurous aftertaste. Sounds off-putting, but nothing beats it for finishing certain Indian grilled lamb dishes.

Red salt, also known as alaea, is a specialty of Hawaii. The large crystals have a pinkish-orangish tinge (not unlike salmon), which the salt picks up from particulate volcanic red clay. Red salt is the traditional salt for a Hawaiian pit roasted pork dish called Kahlua Pig. See Barbecue USA, page 252, for a recipe.

Our features editor, Nancy Loseke, is especially enamored of Murray River salt, a delicate, pale apricot-colored salt from ancient underground rivers in the Murray/Darling River area of Victoria, Australia. The salt has, she says, a pleasing crunch, a pure taste, and has given her a reason to recall to active duty the antique salt cellars she inherited from her grandmother. Each diner gets one, as well as a tiny silver spoon.

She also alerted me to Danish Viking Smoked Sea Salt, a remarkable seasoning that is made by evaporating sea water over a smoky wood fire of juniper, cherry, elm, beech, and oak. Talk about a salt that’s grill friendly! Think of it as the Scandinavian version of American hickory smoked salt, which is made by infusing salt with natural hickory smoke and (sometimes) yeast. This salt, as well as the salts detailed above, are available in some specialty shops, or can be ordered from www.salttraders.com or www.saltworks.com.

Curing salt – Technically speaking, all salts cure the foods exposed to them by drawing out moisture. (See the Asian-inspired fish cure recipe below.) But there are salts on the market that have been especially developed to cure meats quickly; they usually contain sodium nitrate and sodium nitrite, and are familiar to barbecuers who like to cure and smoke their own bacon, hams, sausages, jerky, and other meats, as well as salmon, sablefish, and shad.

And while we’re on the subject of the different types of salt, here are a few thoughts on how to use them for grilling.

When to salt: When grilling steaks and chops, I like to apply a generous seasoning of salt and pepper to the meat on both sides immediately before cooking. Put it on too early, and you’ll draw out the juices and cure the meat—desirable for some dishes, but certainly not for steak.

For everyday use, I reach for kosher salt. I like the way the coarse crystals resist melting so you get crunchy bursts of salty flavor each time you take a bite. I also often use coarse sea salt.

Curing: Curing is a process whereby foods are exposed to salt or a salt sugar mixture or solution for a prolonged period. The salt draws out moisture, giving the meat a firmer texture and, of course, a salty flavor.

Brining works the opposite way. The food is marinated in a solution of salt, often sugar, and water, and in the brining process, by the magic of osmosis, some of the liquid is absorbed by the meat. Thus brining is well-suited to inherently dry foods like chicken breasts, turkey, pork, and shrimp.

Rubs give meat character and personality. Most contain salt. To apply a rub, sprinkle it over the meat and rub it into the surface with your fingers. Hey, that’s why it’s called a rub. (Wear latex gloves to keep your hands clean.)

So what about pepper? Well, as you can well imagine, I have strong thoughts about what comes out of the peppercorn grinder and how to use it for grilling. Stay tuned, because we plan to devote a whole issue of Up in Smoke to it in the near future.

In the meantime, here are two recipes, one never before published, that showcase the amazing talents and versatility of salt. 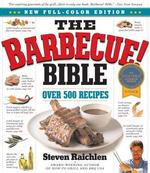 This recipe appears in The 10th Anniversary Edition of The Barbecue Bible, which will be released in May, 2008, by Workman Publishing. You can preorder the book now from Amazon.com. This recipe is almost Zen-like in its simplicity, but makes a terrific appetizer for 6 to 8 people or a main course for 4.

Rinse the shrimp under cold running water, blot dry with paper towels, and put in a large non-reactive bowl. Sprinkle with the lime juice and 1 teaspoon each salt and pepper. Toss to coat, and let marinate for 10 minutes while you preheat the grill to high. Meanwhile, put a wedge of lime and separate mounds of salt and pepper (about 1/2 teaspoon each) on small plates, one for each person. Set aside.

When ready to cook, oil the grill grate. Arrange the shrimp, in their shells, on the hot grate. Grill, turning with tongs, until the meat is firm and pink, about 2 to 3 minutes per side. Transfer to a platter or plates. To eat, squeeze the lime wedge over the salt and pepper and mix with chopsticks; peel the shrimp and dip in the lime/salt/pepper mixture.

NOTE: To de-vein an unpeeled shrimp, make a lengthwise cut along the back of the shell with kitchen shears. Scrape out the exposed vein with the tine of a fork or the tip of a paring knife. Two pounds of head-on shrimp can be substituted for headless.

Try this easy but exotic cure the next time you smoke salmon. Makes about 3/4 cup.

Combine all the ingredients in a bowl and mix with your fingers or a whisk, breaking up any lumps. Transfer to a covered jar and store away from heat and light. The cure will keep for several months.

NOTE: Granulated palm sugar can be found at some Asian markets.

To use:
Generously sprinkle half of the cure evenly on the bottom of a large glass baking dish. Place about 1-1/2 pounds skinless salmon fillets, preferably center-cut, on top of the cure. (Optional: You can soak the salmon in sake, Japanese beer, or Chinese rice wine in the refrigerator for 30 minutes to 1 hour first; drain well and blot dry with paper towels before curing.) Cover the top and sides of the salmon with the remaining cure. Cover with plastic wrap and refrigerate for 1 to 4 hours. Rinse the cure off the salmon under cold running water, then blot dry with paper towels. Using the indirect grilling method, smoke the salmon with cherrywood chunks or chips (applewood can be substituted) until cooked through, about 20 to 25 minutes. For more detailed instructions, see How to Grill, page 309.