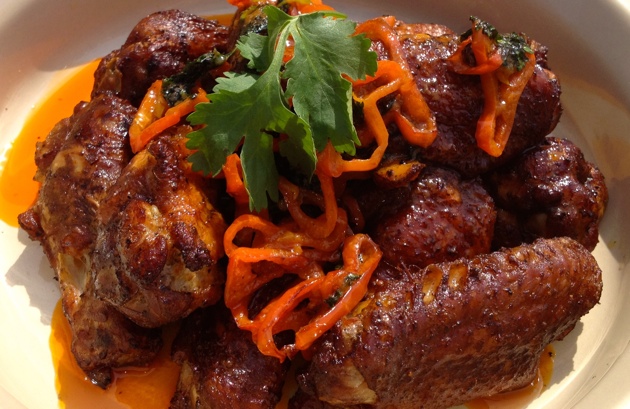 Across Planet Barbecue you’ll find “fire eaters” — people for whom no chicken wing or any dish for that matter can be too fiery. (You may even be one of them!) They’re easy to spot—even at breakfast: They douse their eggs with Sriracha or other hot sauce, then slice fresh jalapenos on top for good measure. Talk at their table often turns to Scovilles—the unit of measure for a chile pepper’s relative heat. Of course, one-ups-manship enters the conversation — i.e., have you tried India’s bhut jolokia (“ghost pepper”)? Ya, no big deal — have YOU tried Trinidad’s Moruga Scorpion? Deadly, man ….

Well, wherever there’s smoke, there’s fire. I always try to satisfy gustatory pyromaniacs with a few incendiary dishes. This year, you have to try Fire-Eater Chicken Wings, electrified with a triple-blast of heat in the form of cayenne pepper, fresh red jalapenos, and a generous dose of hot sauce. With it, you’ll please those pyro palates coming to your next cookout. Just be sure to have plenty of cold beer on hand (or milk!) to put out the fires.

And if you can take that heat and want more, then travel the world’s barbecue trail with a range of global-inspired recipes, and you’ll find many versions of fiery chicken wings. Good news if you’ve been there and done that with the now ubiquitous Buffalo wings and the oft-told story behind them. Besides, you know Raichlen’s Rule: “If something tastes good baked or fried, it probably tastes even better grilled.”

Here are a few of my favorites from my Planet Barbecue — and I have the blistered taste buds to prove it.

As you can see, as different as the recipes for wings are, the preparation and cooking methods are just as varied:

How do you know when the wings are cooked? Make a small slit in the meatiest part: There should not be any pink at the bone. (Note: The exception to this is if the wings have been smoked. In that case, there may be some pink near the bone — this is the smoke ring — the result of a chemical reaction between the smoke and the meat.)