A Live-Fire Romance with OX Restaurant in Portland 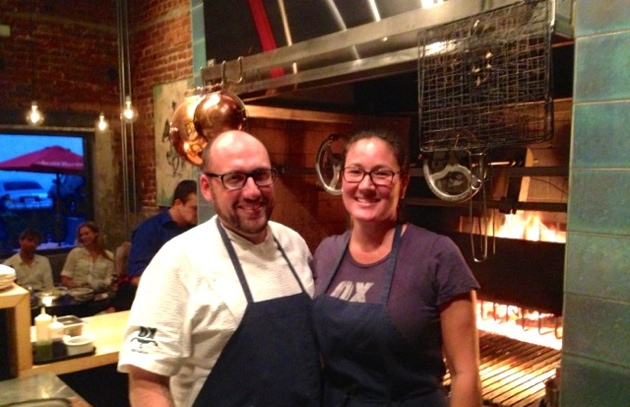 As Greg Denton tells it, “we fell in love over the grill. The year was 1999; the place Terra restaurant in Napa Valley. The Vermont-born, Culinary Institute of America-trained chef took one look at one of his co-workers—a statuesque Ecuadorian-American named Gabrielle Quinonez—and vowed to make her his wife. (They’re pictured, above.)

A decade later, the couple honeymooned in Spain’s Basque country, making the obligatory visits to the touted temples of molecular cuisine. (“Left us cold,” recalls Denton.) They ate grilled fish overlooking the Bay of Biscay in Getteria and snagged a reservation at Extebarri in Axpe (the world’s most celebrated grill restaurant—to be the subject of a future blog). And that very night, somewhere between the first bite of smoked caviar and the last slurp of single perfectly grilled prawn (“a hallucinogenic experience” in Denton’s words), they decided to open OX.

“Once we committed, everything fell in place,” Denton says. The couple found a cavernous brick storefront built in the 1890s in Portland’s Boise-Eliot district. (Over the years, the building has served as a creamery, car dealership, and brothel.) Along the way they met Ben Eisendrath of Grillworks, manufacturer of a super-premium Argentinean-style wood-burning grill that now serves as the focal point of the dining room. The restaurant opened on April 24, 2012.

Intrigued by the challenge, Eisendrath designed a new grill for them, the “Denton” Dual Architectural Asador, 48-inches of gleaming high-tech stainless steel with split grates that raise and lower with the spin of flywheels and a vertical firebox in the back. The system is stunning in its simplicity: You burn the logs to embers in the firebox. As the glowing coals fall to the bottom, you rake the precise amount you need under the food on the grill. The V-shaped grates channel the fat into drip pans loaded with garlic, herbs, and sliced lemons. The drippings get brushed back over the meat.

In homage to Gabi’s Ecuadorian heritage, the husband-wife chefs loaded the menu with South American classics, like pisco sours (made with smoked lemon), ceviche samplers, Uruguayan grass-fed skirt steak, and a stunning grilled lamb heart herb salad—a twist on Peruvian antichucos. In keeping with Greg’s New England roots, they serve chowder, only it’s electrified with jalapenos and an astonishing smoked marrowbone. Halibut comes in bible-thick steaks on the bone, while mammoth artichokes are roasted directly on the embers. And because this is Portland, you don’t have to ask if the grilled beef short rib, maple-brined pork loin chop, or house-made morcilla (blood sausage) on the Asado Argentino platter are humanely raised or locavore. Of course they are.

“Grilling is such a simple process, but the flavors are so complex,” says Denton (recognizable by the octopus tentacle tattoo snaking up his arm). “A wood fire just makes food taste better.” Amen. 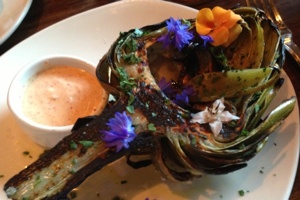