A Thousand Hills to Heaven 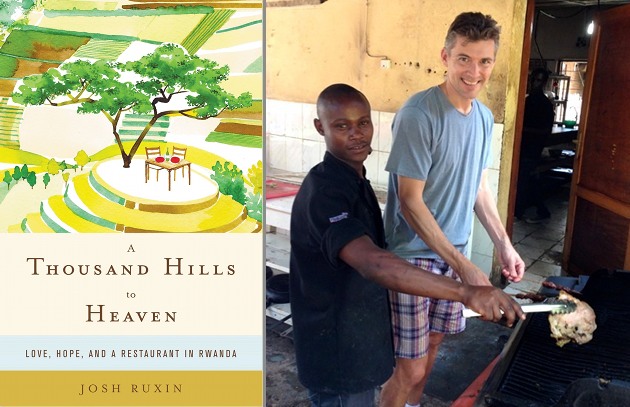 The plot line is simple. High school boy has crush on girl and follows her to an African famine relief meeting. The boy embarks on a mission to Ethiopia, where he decides to devote his life to ending poverty. Boy gets a BA from Yale, Masters degree from Columbia, PhD as a Marshall Scholar in London, winning a Fulbright for a year in Bolivia for good measure. The newly minted PhD rubs elbows with presidents and kings, with tech billionaires and rock stars. The young man meets a young woman, woos and marries her, and takes her by way of a honeymoon to one of the poorest countries in Africa—a land so shamed by its recent past, its very name is synonymous with genocide.

And thus unfolds one of the most remarkable stories I’ve read this year about hope, love, sacrifice, triumph, and, yes, some really amazing food.

Aid visionary and Colombia University public health professor Josh Ruxin did not set out to write about food, although his story takes place against a backdrop of heart-wrenching hunger and Eden-esque abundance, tracing a journey from famine to feast.

He did not write a book about restaurants, although he tells how his wife, Alissa, created one of the hippest dining establishments in Africa: Heaven Restaurant & Inn in Kigali.

He did not set out to write about good and evil, but his book describes one of the most horrific genocides in human history, and the remarkable efforts of both the victims and their persecutors to find forgiveness and redemption.

He didn’t even write a love story, although A Thousand Hills to Heaven centers on two people who are very much in love—young Americans you might meet at a party, endowed with the same hearts, brains, and DNA as you or I—but who found the strength to work a thousand miracles in a land God forgot.

And he certainly didn’t write a cookbook, but he concludes his story with six recipes that will make you want to head for your kitchen and fire up your grill to try them.

What Josh Ruxin did write is one of the most extraordinary narratives of hope I have read in decades—a book that, just for reading it, makes you aspire to be a better person.

This is the story of how two enterprising Americans made an extraordinary difference for a country of 11 million people. And while it’s unfashionable in our partisan age to use words like “inspiring” or “life-changing,” that’s exactly what A Thousand Hills to Heaven is.