The Secrets to the Best Thanksgiving Turkey Ever 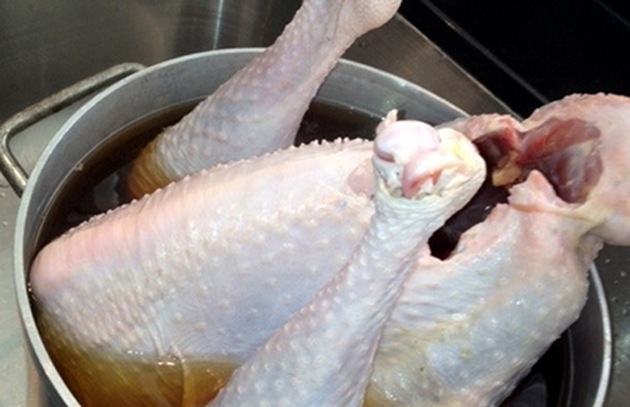 Desperate times call for desperate measures. Especially when it comes to turkey. In our collective quest to find an antidote to the dry birds of Thanksgivings past, most of us have tried—at least once—a number of unconventional cooking techniques. Draping butter-soaked cheesecloth over the breast, for example. Or awkwardly flipping the bird from back to front and front to back as if it were a restless sleeper in the oven. Roasting the turkey in a buttered paper grocery bag. Even sizzling it in a deep fat fryer.

Well, take your quest no further. A combination of two techniques—brining and smoke-roasting—will produce the tender, succulent bird of your dreams.

Brining: If you remember your college chemistry, brining involves such phenomena as osmotic pressure and semipermeable membranes. (Sorry, I don’t either.) In layman’s terms, a brine relaxes the tightly coiled proteins in the meat muscles (think of a Slinky or an old-fashioned telephone cord), which then fosters the absorption of liquid, salt, and any other flavors you’ve added to the brine. The bird will be noticeably moister, more tender, and more flavorful than a bird that has not been brined. Even if slightly overcooked. (Not that you’d do that.)

As for smoke-roasting, there are at least five advantages to barbecuing your turkey:

The first step is to brine the bird for at least 8 hours, and up to 24.

The next step is to fire up your outdoor cooker. You have numerous options here: kettle grills; offset barrel smokers; upright water smokers; pellet smokers, such as Traeger; even kamado cookers, like the Big Green Egg. If you own a simple charcoal kettle grill, you can smoke a magnificent turkey. Gas grills, unfortunately, do not work well for smoking. Because of the way they’re vented, it’s hard to secure a pronounced smoke flavor—even on a gas grill with a smoker box and dedicated burner. If you want to enjoy a real smoked turkey, invest in charcoal and wood chips.

Finally, there’s the technique—a method I have come to call smoke-roasting. It’s similar to indirect-grilling in that both are done next to (or between) the heat sources at a moderate temperature (325 to 350 degrees). What makes it smoke-roasting is the addition of soaked hickory or other hardwood chips to the coals.

Don’t confuse smoke-roasting with traditional smoking. The latter refers to a process whereby the bird is cooked “low and slow”—at a low temperature (200 to 250 degrees) for a long period (4 to 6 hours or more, depending on the size of the turkey). This is the method practiced by competition barbecuers and it gives you a bird with remarkable flavor and tenderness. The bad news is that it produces rubbery, nearly inedible skin, as the cooking temperature isn’t high enough to render the fat.

The main advantage of smoke-roasting is that it gives you both a smoky flavor and crisp skin. To this add minimal effort: All you need to do is replenish the coals and wood chips every hour. That’s about all there is to it.

Try these additional tips for your best Thanksgiving ever:

Test your skills with my Bourbon- and Maple-Brined Smoke-Roasted Turkey this Thanksgiving.

Two other great alternatives for cooking a whole bird are Beer Can Turkey or Spit-Roasted Adobo Turkey.