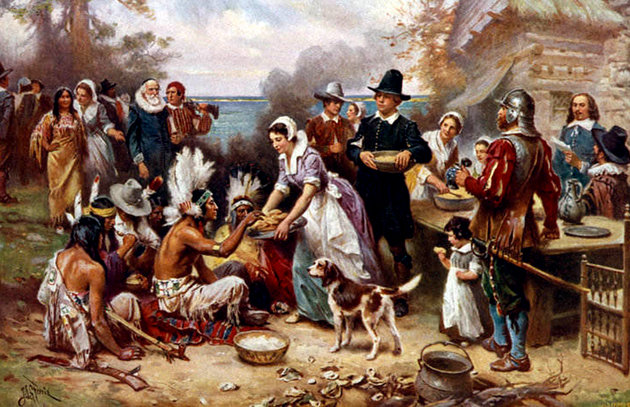 Talk about irony. Ever wondered how turkey, that centerpiece of the American Thanksgiving feast, came to be named for a Muslim country in the Near East?

Turkey was, indeed, native to the Americas—hunted in the wild by Massachusetts Indian tribes and domesticated on the Yucatan Peninsula by the Mayans. But when it came to marketing this New World food in Europe, the 17th century explorers and merchants named it for what had been a source of exotic foods and luxury goods for centuries: Turkey. Istanbul had the cachet of a global food market the way Paris or New York does today.

Further confusing the etymological origins of the word “turkey” is the fact that in many countries, the holiday bird was believed to be from India. No one had iPhones or GPS systems back then, of course, and the early explorers of the New World mistook the Americas for the eastern coast of Asia. Consequently, if you are an ex-pat living abroad and trying desperately to line up a turkey for November 28, here’s how to ask for your holiday bird:

• In France, say dinde, an abbreviation of “chicken from India.”
• In Holland, call it kalkoeri, a corruption of Calcutta.
• In Norway, say kalkun—another reference to Calcutta.
• As for Turkey (the country), you’d ask for hindi, the local term for India.

Here in the U.S., it’s appropriate we eat turkey on Thanksgiving. This is our most ecumenical holiday and it never imposes ethnic, religious, or political boundaries. Everyone is invited to celebrate in his own way. And everyone does.

Which brings me to the Raichlen 2013 Thanksgiving menu, which takes ecumenical to the next level. We start with a pumpkin dip inspired by one of my favorite Kurdish restaurants in Istanbul. The main course harks back to my student days in Paris where I learned to stuff a whole turkey with truffles and butter under the skin. Grill the turkey using the indirect method, basting well with the pan juices. The grilled onions take a page from Italy’s playbook (a sweet-sour filling of honey and balsamic vinegar), while the cranberry salsa pulses to a Latin beat. Dessert offers a barbecue country twist on an American classic: smoke-roasted apple crisp.

Need more recipes from around the globe this Thanksgiving? Check out the ideas in Planet Barbecue for meals that can spice up your holiday.

If your holiday feast breaks down international boundaries, send details and photos to the Barbecue Board.