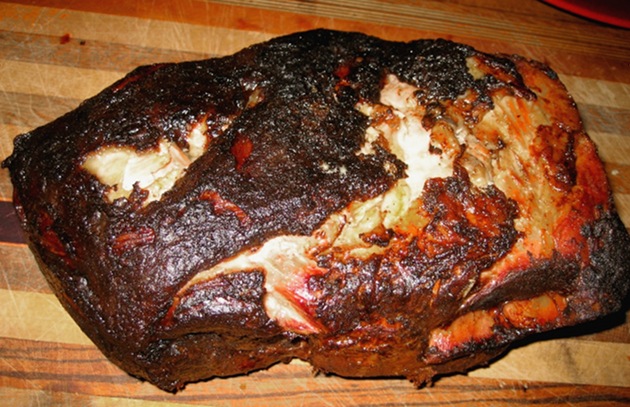 Sorry, Stephen Hawking, but “the discovery of a new dish does more for human happiness than the discovery of a new star.” So wrote a French food philosopher named Brillat-Savarin in 1825 (yeah, the same Brillat who gave his name to the obscenely rich French cheese and a rum-soaked cake for dessert).

I don’t know what dish the Frenchman had in mind, but for me it would have been pork butt. Sure, pork chops, ribs, tenderloin—even trotters and snouts—have added much to human happiness. But when it comes to sheer barbecue bliss, I snap my fat-slicked fingers for pork butt.

Without pork shoulder there would be no North Carolina pulled pork (western North Carolina-style, at least—they use whole hog in the east), no Hawaiian kalua pig, no Puerto Rican puerco asado, no Yucatecan pebil, no Korean bo ssam.

You could think of pork shoulder as a whole hog in microcosm: a combination of leaner and more marbled muscles knitted together with generous striations of tasty pork fat. A whole shoulder tips the scale at 12 to 18 pounds—a singularly impressive looking hunk of meat. If you’re lucky, it even comes sheathed in skin (which you can turn into cracklings with the strategic application of fire).

Nonetheless, a certain measure of confusion surrounds the pork shoulder. Boston butt or picnic ham? Berkshire? Mangalitsa? Duroc? Is it best cooked by smoking, indirect grilling, or spit-roasting? Or what about those crazy St. Louisans, who slice pork shoulder on a meat saw to make a sui generis local specialty: St. Louis pork steaks?

So what’s in a name? Let’s start with the nomenclature.

A pork shoulder, as the name implies, comes from the upper front leg of the hog and is generally divided into two sections. At the top of the leg is a rectangular roast known in the U.S. as the butt or Boston butt.

The lower part of the shoulder is referred to as the picnic or picnic shoulder. (When cured, it is sold as a picnic ham.) Unlike the butt that rests above it, the picnic has a more triangular shape to it, and more bone, too. It, too, can be “pulled” (shredded) to make pulled pork.

Sometimes in supermarket and big box meat departments, you find cuts called pork shoulder roast or blade roast. These are cut from the top of the shoulder and come both bone-in and boneless. They come in varying weights.

What to look for when buying pork shoulder:

But even once you know the difference between a Boston butt and picnic, not all pork shoulders are equal. Here’s what to keep in mind when shopping:

Opting for chops instead? Check out these other dinner ideas: