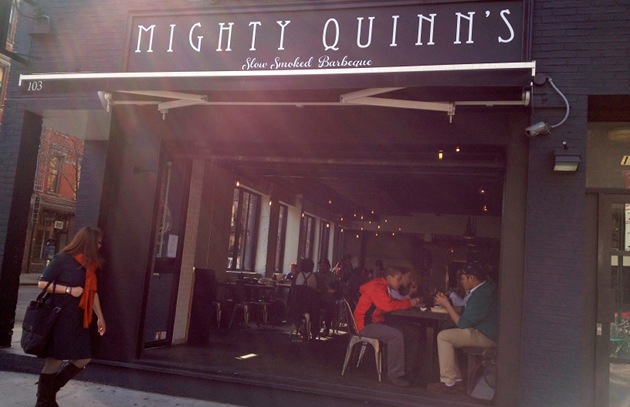 To hear Hugh Mangum tell it, he never set out to become a Brooklyn brisket mogul, nor did he aspire to serve the biggest, baddest beef rib in Manhattan. No, the musician was happy in a career that most guys would kill for: earning a living as a drummer touring with Jacob Dylan and the Wallflowers.

The owner of Mighty Quinn’s Barbeque in the East Village comes by his passion naturally. Although he grew up in Santa Monica, his Houston-born father always kept an assortment of Texas-style barbecue pits fired up in the backyard. Mangum acquired a pit of his own—a 16-foot Peoria custom cooker on a trailer. He hauled it to “Smorgasburg,” a foodie street fair in the Williamsburg section of Brooklyn, and went into business selling brisket. “I had $600 when I started. Within a few months, we were blowing through a brisket every three minutes.”

Mighty Quinn’s doesn’t look like your old school barbecue joint, not with its white metro wall tiles, grey slate counters, triple-thick butcher block communal table, and industrial bar stools at a granite counter running the length of the floor-to-ceiling windows. The restaurant seats 55 with room for 22 more on the terrace.

The restaurant breaks with tradition in other ways, too. Spurning the industrial meats traditionally used in America’s barbecue belt, Mangum cooks briskets and beef ribs only from hormone-free, pasture-raised cattle. His pork shoulders and baby backs come from a crossbreed of Duroc-Berkshire heritage breed hogs. His side dishes run to the likes of grilled ratatouille and edamame and sweet pea salad. Even the pickles—celery, cucumbers, onions, and chiles—are fermented on the premises.

I caught up with Hugh recently to ask some, er, burning questions about the philosophy and techniques behind his success.

What pit do you use and why?

We chose the wood-burning J&R Oyler with meat racks on a revolving carousel. We opted for the model without the electric burner. We cook the old school way—with wood and time. Venting the pit required the installation of a smokestack that extended twelve feet beyond the landmark building’s six stories. At $15,000 per floor, the ventilation system was one of the restaurant’s biggest expenses.

What wood do you burn?

Growing up eating Texas barbecue, we smoked over pecan wood. But at Mighty Quinn’s, we burn oak, apple, and cherry (roughly 90 percent oak; 10 percent fruitwood). It would be hypocritical to source our meat locally, but truck in pecan wood from the South.

What do you use for seasoning and when do you apply it?

We take a “less is more” approach. We season solely with salt, pepper, and paprika (two parts salt and pepper to one part sweet paprika.) We cure the seasoned meat for 24 hours before putting it in the pit.

How do you make your brisket so incredibly tender and moist?

We start with a two-inch bed of embers and keep the pit at 220 to 225 degrees. We cook our briskets a full 22 hours. Another secret is humidity: We keep 10 to 15 gallons of meat drippings in the pit’s drip pan for the entire length of the cooking process. We won’t even open the pit for the first 12 hours for fear of losing the moisture. Our briskets come out so tender, we move them on a pizza peel to keep them from falling apart.

The moment a brisket comes off the pit, we tightly wrap it in plastic wrap. This seals in the fat and moistness. But equally important is letting the meat rest for 30 to 90 minutes before carving, which sets the juices and relaxes the meat. We use an Alto-Shaam (a professional warming oven); at home, we use an insulated cooler.

Any tips on carving and serving brisket?

We separate the point (the fatty cap, often called the deckle) from the flat and slice both across the grain for serving. This gives you a satisfying mix of lean and fatty meat. The last step is a sprinkle of “finishing salt”—coarse pyramid-shaped crystals of Maldon sea salt. It’s like the crackly crystals that distinguish really good aged Gouda or Parmesan cheese.

Try these other great pit stops on your next barbecue road trip: