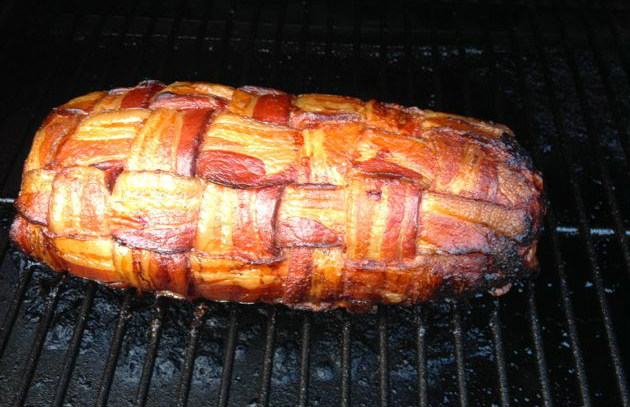 If I did my job well during Bacon Month (August), you’ve been motivated to make your own home-cured and smoked bacon from scratch (see my easy-to-follow directions here). You’re up to speed on how to grill bacon-wrapped foods, from onion rings to chicken drumsticks.

Now—just in time for National Pork Month—it’s time to tackle the bacon weave, that magnificent mat of pork meat and fat that’s taken the blogosphere—and our barbecue community—by storm. The cool factor is off the charts, of course, but there’s another reason to add bacon weaves to your repertoire: Bacon blankets not only add flavor, but they help keep grilled and barbecued meats moist—especially during low and slow smoke sessions. (The pros have a name for the technique: “barding.”)

So who first had the idea to apply the classic over-and-under weaving technique to strips of cured pork belly, a.k.a. bacon? I wish I knew (if you do, please let us know). But the technique went viral in December 2008, when Kansas City, Missouri, competition barbecuers Jason Day and Aaron Chronister began promoting their now famous trademarked “Bacon Explosion.” (Chronister, an experienced Internet marketer, strategically positioned the phenomenon in the cyberspace fast lane.) The men are quick to admit, however, that they didn’t invent the bacon weave. The weave may look intimidating, but—trust me—you can master it in 5 minutes. (If you’ve ever made a lattice weave crust for a pie or woven a potholder at camp, you can do it.) Click here for step-by-step instructions accompanied by photos.

Try it out on a bacon sausage extravaganza called the Fattie, inspired by Adam Myers and Robbie Corcoran of Tulsa, Oklahoma’s wildly popular Burn Co. Where you go from there is up to you. Here are some possibilities:

If you have other ideas, please share them with us on the Barbecue Board.

Get detailed instructions and tips for building the best bacon weave, and try the Fattie recipe.