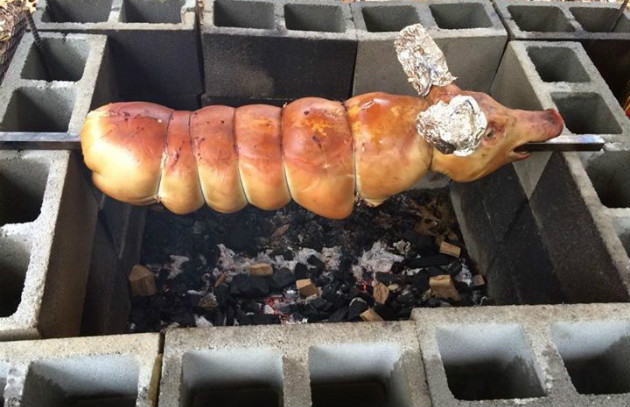 Every once in a while, you come across an idea so original, so insanely mouthwatering, and just so darn cool, you shelve whatever else is on your grill or smoker to try it. Such is Michael Garcia’s porchetta, a whole hog skillfully boned, stuffed with fennel, garlic, herbs, and other seasonings, tied into a compact cylinder, spit-roasted, and served skin crackling crisp off the fire. Hey, if you do try it (I mean when you try it), send photos to the Barbecue Board. Thanks, Mike.

Having worked in the restaurant industry for 13 years, I’ve held every job from dishwasher to line cook to head of the kitchen. Being of Italian and Spanish descent, I was introduced to a plethora of robust food traditions at an early age—and funny enough, my mother was just showing some home videos where a 3-year-old me insisted on adding spices to a bowl of Jell-O I was making. This might have been my first lesson on less means more and letting ingredients speak for themselves. But enough about me. You came here to read about grilling and barbecue.

“The Feast” started about 10 years ago. It was initially a birthday party I threw for myself. I invited all my friends and we’d pass the day drinking beer and grilling various meats. The last few hours of the party were always spent brainstorming on how to make the next year even more epic. Three years ago we decided to start roasting whole beasts.

The first project was a Cuban-style roasted pig, which turned out more like a Southern-style smoked pig. The homemade mojo marinade gave it an interesting spin, though. It was smoked on my homemade pit, which is essentially just cinder blocks and metal mesh grating. The next year we roasted a whole lamb. This was my personal favorite—marinated in fresh rosemary, mint, oregano, red wine, and garlic, and roasted over hardwood charcoal and alder. This beast was served with fresh pita from the local Middle Eastern market with classic Mediterranean sides.

Time got away from me this year, and a few weeks prior to the feast, I was frantically searching for ideas. Then it hit me: porchetta! My favorite street food in Italy. The traditional method of preparing porchetta is with the whole pig. Deboned. “Here’s a challenge I’m willing to accept,” I thought to myself. I have deboned plenty of chickens; how much different could this be? After watching a couple YouTube videos, I felt confident and ordered a 90-pound pig. Here we go!

December 5, 3:00 PM: I recruited my old friend and veteran Feast attendee Kyle Lipscomb to help me pick up this beast and load it into my car. Did I mention I drive a Fiat? December 5, 5:00 PM: Kyle L. had to split, but my neighbor Micah and my good friend Kyle Zeman offered to help me break down the pig. I first went after the rear legs and had my two assistants debone and cube the meat. Meanwhile, I removed the ribs, hips, shoulders, and spine. All in all, it took about an hour to debone.

Next, I started seasoning the pig. First, the outside and inside were liberally coated with sea salt. In a cast iron pan I toasted fennel seed, juniper berries, black peppercorns, and dried Calabrese peppers. Once they became fragrant, I ground them up in a spice grinder and dusted the mixture over the pig and cubed meat. For herbs I used fresh rosemary, sage, and a good amount of fresh garlic. The whole thing was finished with a splash of olive oil and some orange segments and juice. We left the cubed meat to marinate in the fridge and the pig to marinate in the bathtub on ice overnight. December 6, 7:00 AM: I woke up early because I heard rain. Not good. I went to the store to grab a few last-minute items, and lo and behold, the weather started to clear up. The gods had accepted my Feast sacrifice!

Sewing this guy up was not as easy as I anticipated. (Pig skin is tough.) First, I ran a cleaned up steel rod I had through the mouth to use as a spit. The stomach was sutured with butcher’s twine, and I used steel wire to truss and give the “pig sausage” (now stuffed with the cubed meat) its shape. Took me around an hour of messing around. December 6, 11:00 AM: Fire time. I used hardwood charcoal and oak chunks. Once the coals were right, it was showtime. December 6, 4:00 PM: The porchetta cooked for about four hours: I turned it on the hour. For the last hour, however, I turned it once every 30 minutes so the outside was evenly browned. Multiple internal temp reads from various points on the pig gave me 145 degrees F, so we pulled it off. It was left to rest for an hour, during which the temp rose to 150 degrees F.

December 6, 5:00 PM: All 40-something guests hovered around anxiously waiting for me to cut into this seemingly perfect porchetta. As I plunged my knife in for the first cut, all I could think was, “Please don’t be raw inside.” It wasn’t. It was glorious. December 6, 5:30 PM: The meat has been chopped up, the sides are ready, and the feasting has begun. For those who wanted to eat porchetta a little more traditionally, I offered ciabatta rolls, red onion, Parmigiano Reggiano, sauteed rapini, and salsa verde (a parsley pesto with garlic, olive oil, sea salt, and anchovies). MORE ABOUT SPIT-ROASTING:
The Spin on Spit-Roasting
Spit-Roasted Leg of Lamb
German Whole Hog (Spanferkel)
Spit-Roasting Stands on Its Head