National S’mores Day Is Coming Up: Here Are 10 New Ways to Celebrate 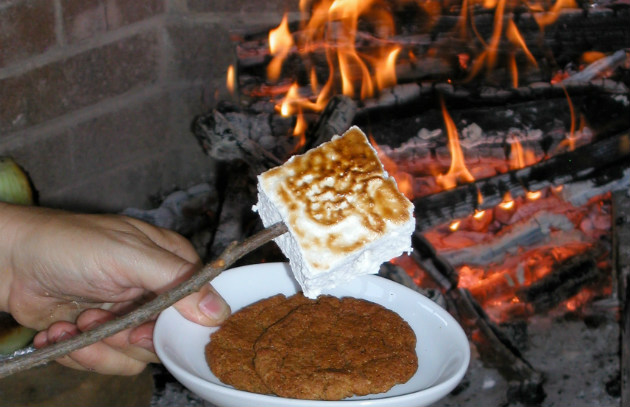 The origins of this campfire treat are unclear. We do know that the recipe for s’mores first appeared in a 1927 scouting handbook called Tramping and Trailing with the Girl Scouts. Yes, this portmanteau word—a combination of “some” and “more”—has been on the lips of North American outdoor cooks for nearly a century. (As have dabs of gooey fire-roasted marshmallows, smears of chocolate, and graham cracker crumbs. S’mores are gloriously messy to eat—they’re supposed to be gloriously messy to eat.)

When it comes to classic s’mores, there are two camps: people who carefully roast their skewered marshmallows to an even golden-brown, methodically twirling the skewer or stick; and people like me, who set the marshmallows on fire, then extinguish the blaze by wildly waving them or blowing on them.

When it comes to fire-roasting your s’more, you have several options. The best is the classic: on a sharpened stick over a blazing wood campfire. In your backyard, I’d opt for a fire pit or a charcoal grill without the grill grate. At one memorable party at our house, we positioned a lit Big Green Egg on the patio and armed guests with s’more forks to grill (make that burn) their own.

Another option is to place small charcoal grills, like the Weber Smokey Joe or Lodge Sportsman’s hibachi, in the center of the table (on a heatproof stone or metal slab, of course), provide skewers, and again, let your guests grill their own.

What’s your idea for an over-the-top s’more? Please post photos and recipes to the Barbecue Board.